First off, if the title of the episode is any indication, we definitely won’t be getting a second season of WandaVision.

Marvel Boss Kevin Feige told the press at TCA last week “to never say never” when it comes to a season 2 of the Elizabeth Olsen-Paul Bettany Disney+ Marvel series, but it’s certainly clear now that the series will bridge to the movies Captain Marvel 2 (or upcoming Disney+ Secret Invasion series) as expected and Doctor Strange in the Multiverse of Madness. 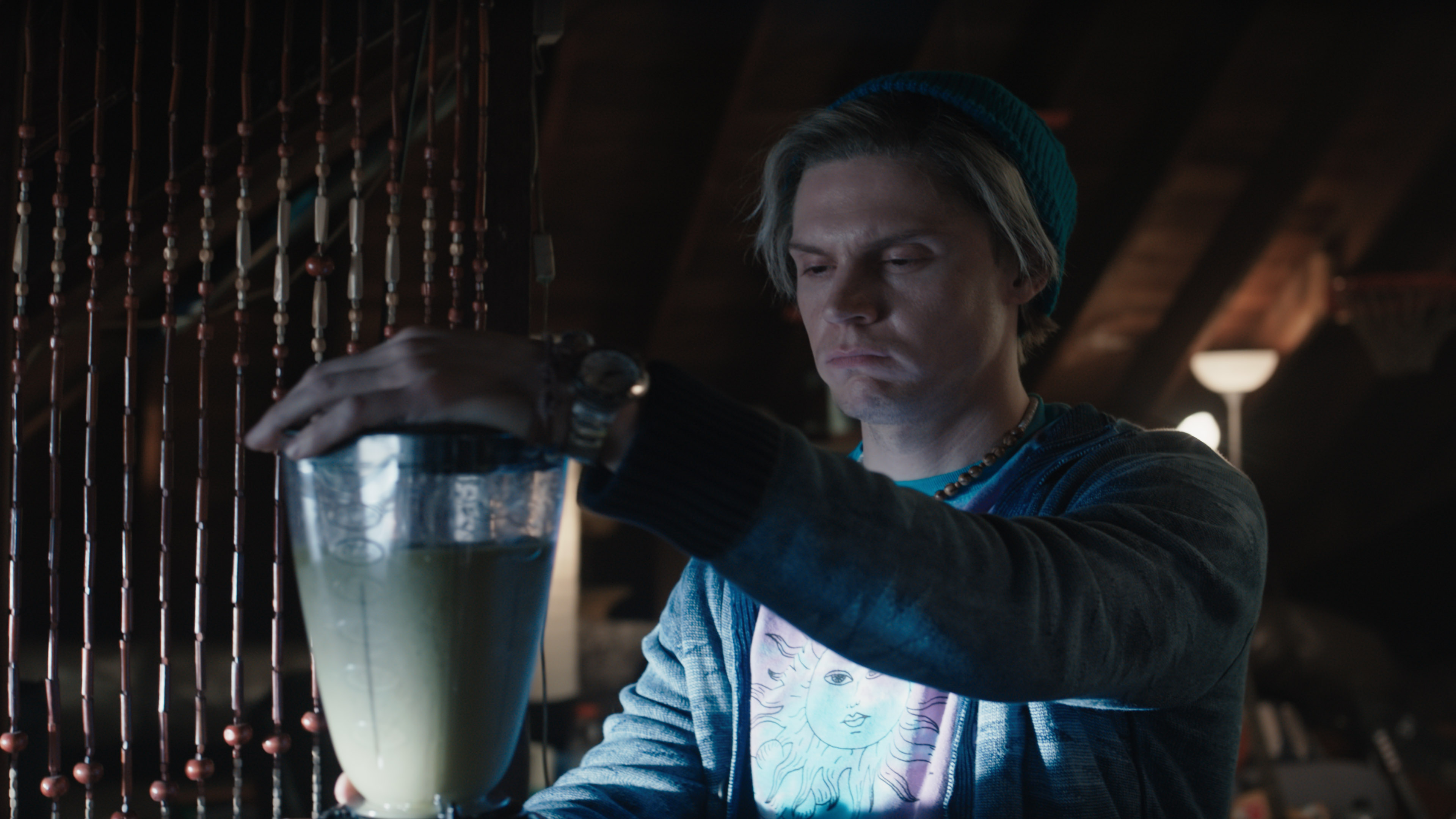 In regards to how the finale directed by Matt Shakman and written by Jac Schaeffer extends to those big pics, read on. However, to clear up a few big things that some were expecting and did not occur: Big bad villain Mephisto never revealed himself, and as of this moment, Agnes’ husband Ralph doesn’t appear to be Mephisto.  Later on in the episode as Monica Rambeau (Teyonah Parris) learns while being holed up with Evan Peters’ Quicksilver, he turns out to be an actor by the name of Ralph Bohner. Logically, it’s the “Ralph” who Agnes (Kathryn Hahn) kept referring to as her husband. In another ‘duh’, Evan Peters’ character is really not Pietro Maximoff. Also, walking away from tonight’s episode, it’s not clear how “The Series Finale” connects to Sony/Marvel’s upcoming Spider-Man: No Way Home movie. If that’s the case, we’ll learn more in December. 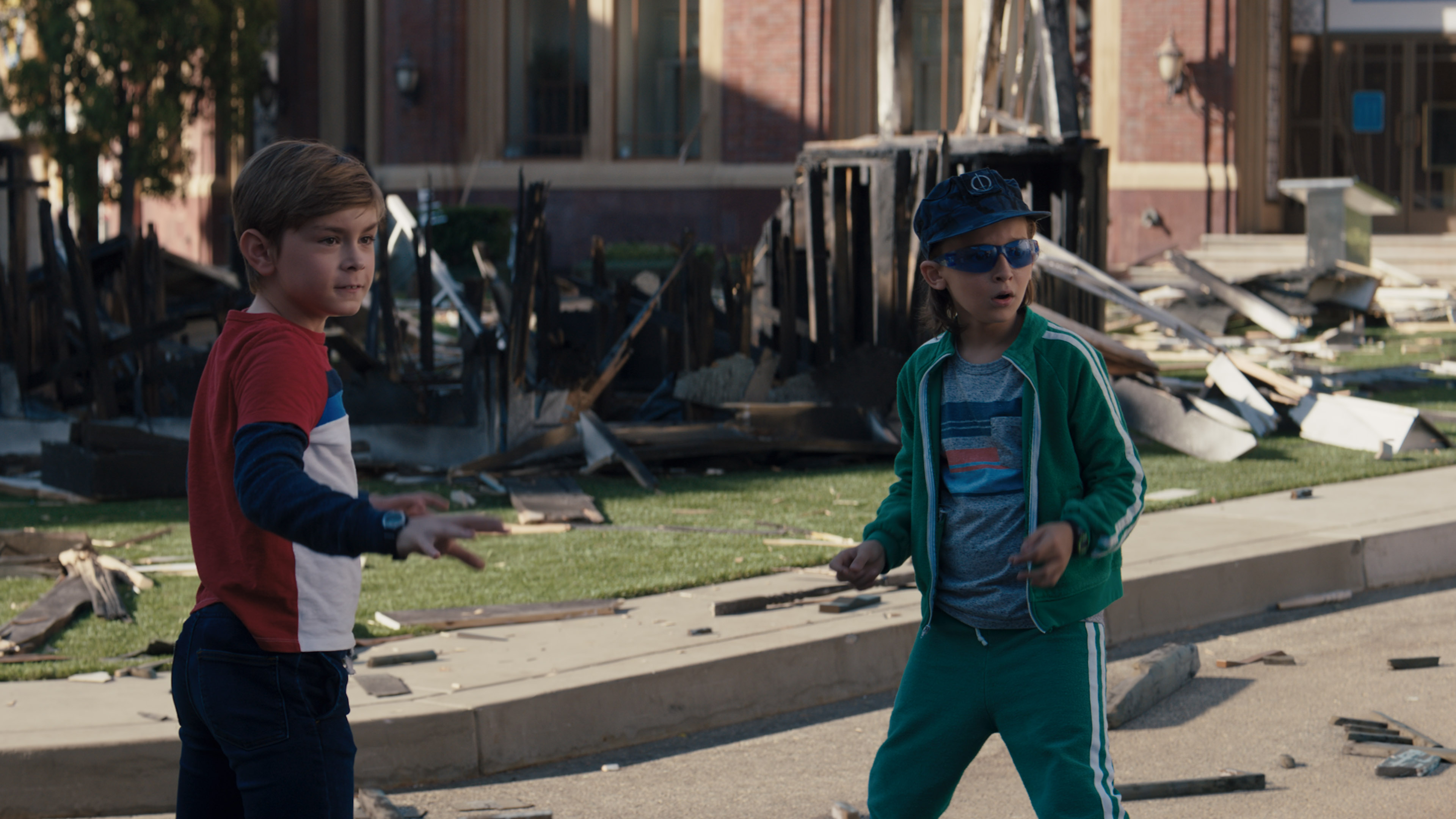 While we were all waiting at the edge of our seats for major revelations tonight, WandaVision‘s last episode wraps up in a favorable, although predictable way: Good triumphs over evil, i.e. Agnes doesn’t rule the day; and Wanda transforms into the Scarlet Witch as expected.

All of this said, there is a cliffhanger: Will Wanda ever see her family again, meaning hubby Vision and boys Billy and Tommy? And if so, when? Fast forward to the second of two end-credit sequences and we see Wanda, far away secluded in a cabin in a snowy mountain wilderness. As she enjoys a cup of tea on the porch, her alter ego, the Scarlet Witch is busy inside, going through Agnes’ Darkhold Book (aka the Book of the Damn) and in the distance, Scarlet hears the screams of Tommy and Billy calling for her help. 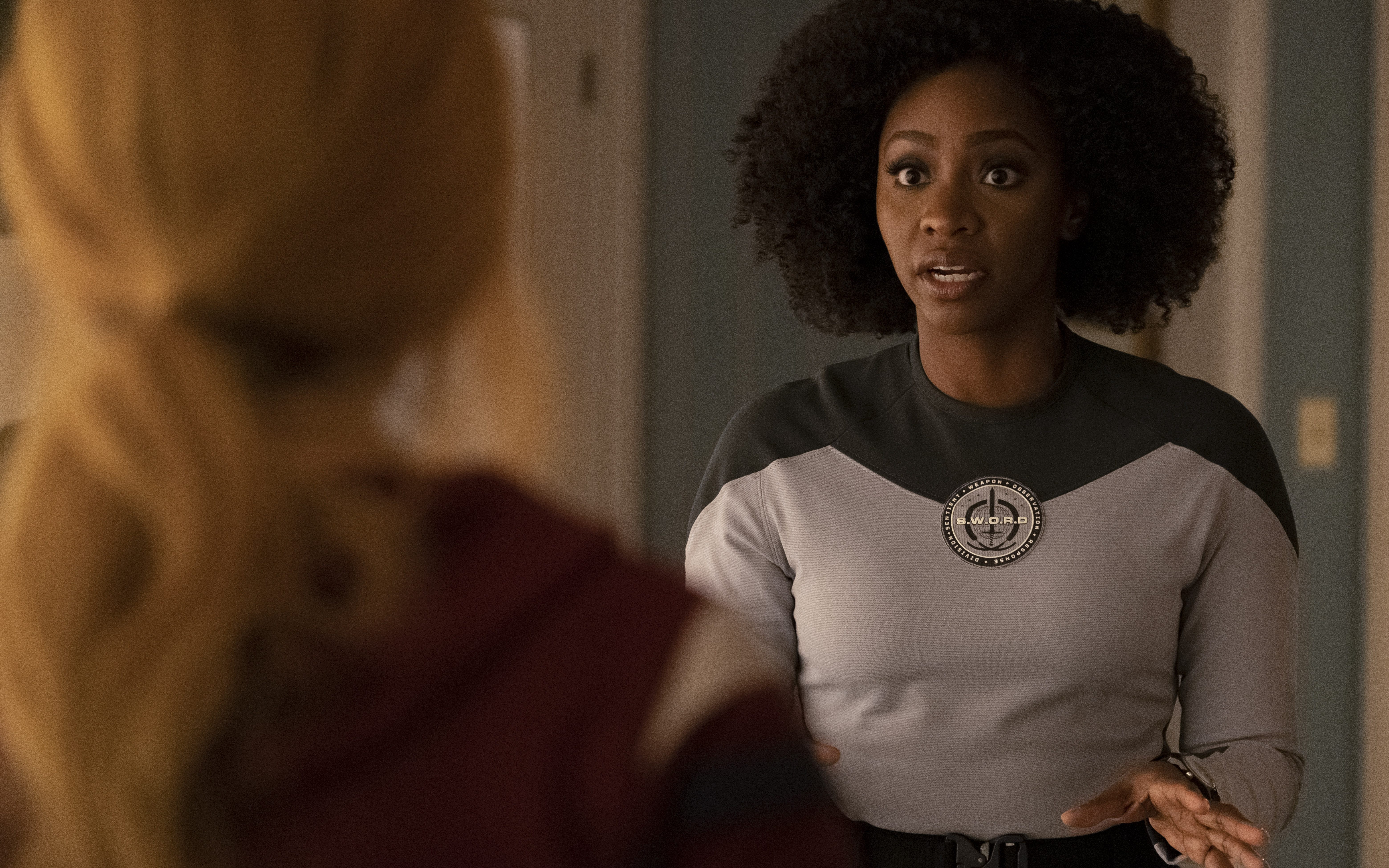 The first coda pertains to Monica. As she’s clearing up the debris from Agnes and Wanda’s fight in the Westview town square, with Hayward (Josh Stamberg) arrested in the distance, she’s called inside a movie theater (which looks a lot like the one on the Disney Burbank, CA lot) by an FBI agent who reveals herself to be a Skrull (you know, one of the aliens from Captain Marvel). Setting up the handoff to that sequel, the Skrull tells Monica, “He heard you’d been grounded. He’d like to meet with you.” Monica smiles. ‘He’ is greatly believed to be Samuel L. Jackson’s Nick Fury. Fury was last seen in the end credits sequence on a space ship in Spider-Man: Far From Home. Hence Monica’s next journey with Fury will be in Captain Marvel 2 or with him and Skrull leader Talos (Ben Mendelsohn) in Secret Invasion. Moments before, during the close of the episode, one of Monica’s parting conversations with Wanda is “Given the chance and given you power, I’d bring my mom back. I know I would.” Wanda answers, “I’m sorry. For all the pain I’ve caused. I don’t understand this power, but I will.”

Other major moments that went down during “The Series Finale”:

—There’s a lot of back-and-forth fighting between Agnes and Wanda. Remember from episode 8, Agnes absorbs power and this becomes Wanda’s constant headache on how to beat her throughout this episode. We begin “The Series Finale” with Agnes having a purple power chain around Tommy and Billy’s throats. Wanda feasibly releases them with a red bolt to Agnes’ chest. Like Darth Vader teaching Luke Skywalker a thing or two about the dark side during a lightsaber fight, we’ve got that going on with the clash between Agnes and Wanda here. “The Scarlet Witch isn’t born, she’s forged,” Agnes teaches Wanda during battle. “I’m not a witch, I don’t cast spells, no one taught me magic” cries Wanda. “It’s your destiny to destroy the world,” says Agnes before torturing a number of the Westview citizens, whom Wanda scurries to save.

“You’ve tied your family to this twisted world and now you can’t live without either,” says Agnes, “Save Westview or save your family.” 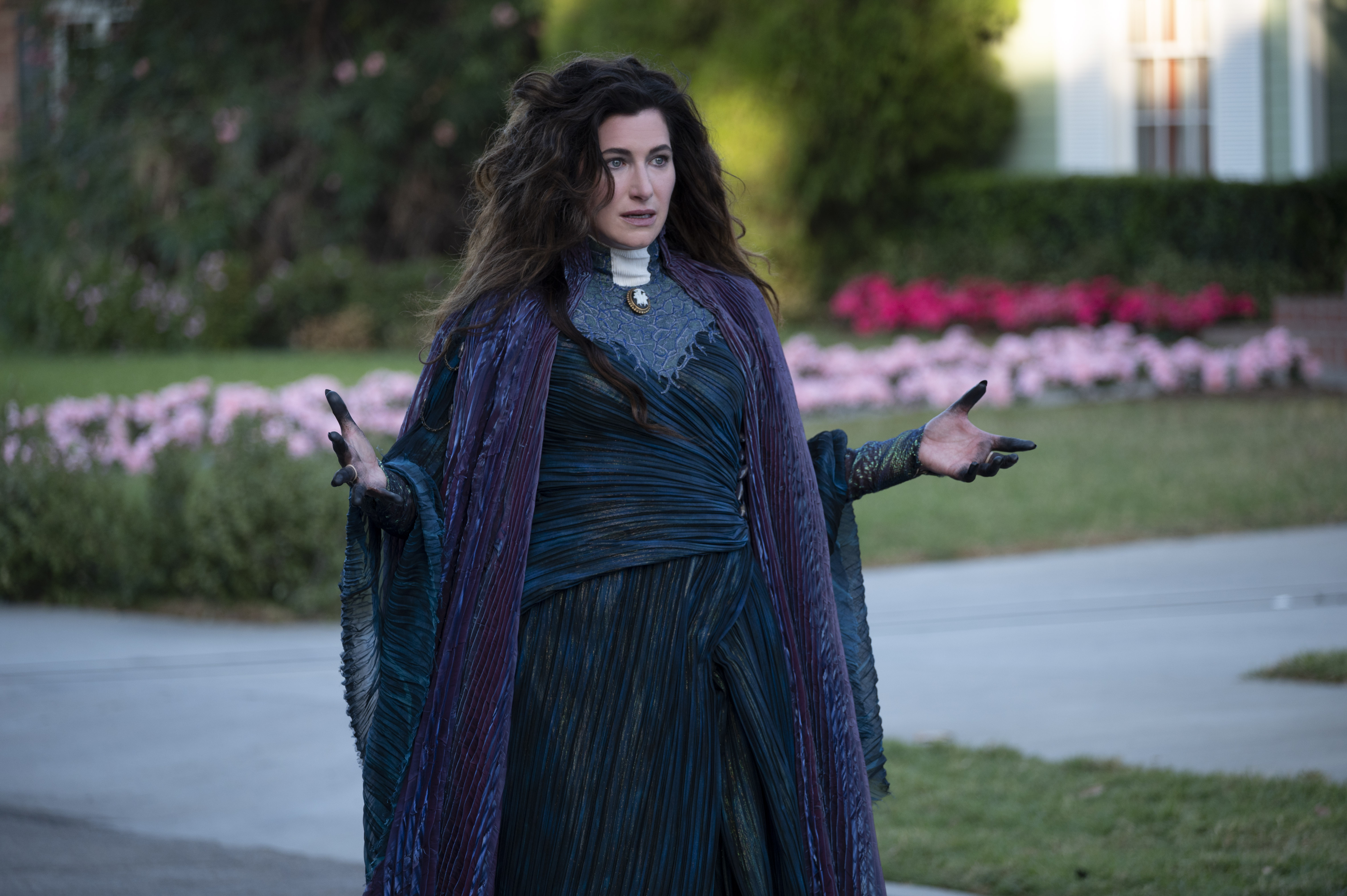 Later, on, in the ultimate showdown between Agnes and Wanda, it appears the latter has lost after zapping the former with enough red bolts. Wanda looks drained, but alas, it’s Agnes without the power, as the former regains her energy.

“In a given space only the witch who casts them can use her magic,” Wanda tells Agnes about using the Runes, “Thanks for the lesson. But I don’t need you to tell me who I am”. And the red witch ears begin to form on Wanda’s head as she absorbs all of Agnes’ power and becomes the Scarlet Witch in her full uniformed red gown.  “Oh, God. You don’t know what you’ve done,” says Agnes. The two float back to the Westview town square where Wanda’s punishment for Agnes is making her the nosy neighbor indefinitely in Westview.

–A hysterical line from tonight, “Boys, handle the military, Mommy will be right back,” Wanda instructs Billy and Tommy on taking out Hayward’s troops in the town square. 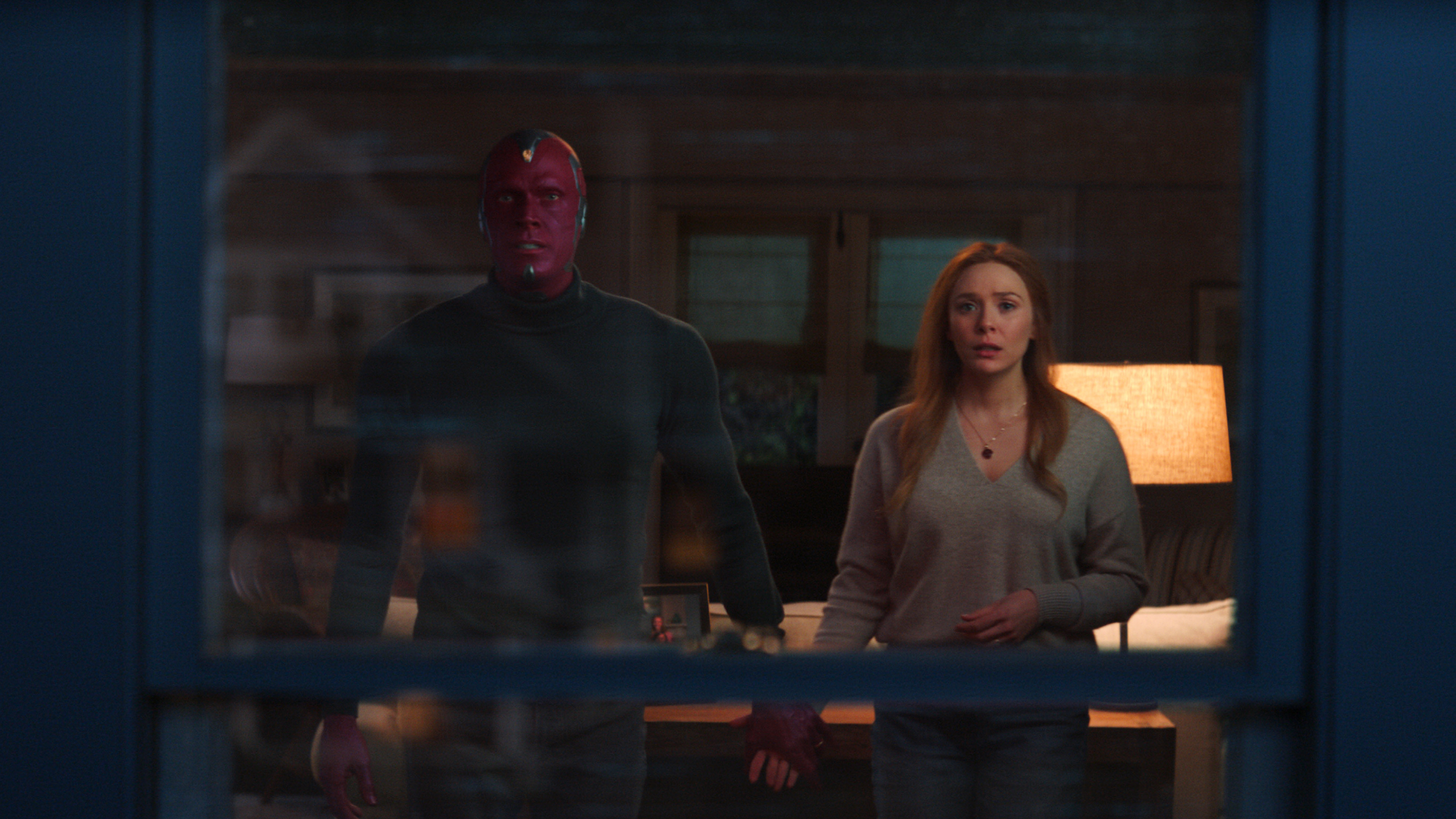 Toward the end, Wanda and Vision take their sons home to put them to bed. Wanda has the Hex dissipating around Westview. As it approaches their house, Wanda and Vision know it’s the temporary end of him, as well as a long nap for the boys. Wanda and Vision see the red Hex coming, and he knows it’s the end, for a while. He may be back at some point in the future, but he gets he can’t live in Wanda’s world right now. In a teary moment, Vision asks Wanda, “What am I am?” She answers, “You, Vision, are the piece of the mind stone that lives in me. You are a body of wires and blood and bone that I created. You are my sadness and my hope. But mostly, you are my love.”

And if that didn’t make you cry, well, then you’ve got the stone cold heart of Thanos.