In the American film industry today, actors don’t come much more credible or committed than Hilary Swank. This is a judgment that would be endorsed by almost everybody, including the voters at the Oscars, who gave her the Best Actress award for Boys Don’t Cry in 2000 and again for Million Dollar Baby in 2005.

Since this double triumph, Swank has moved in and out of the spotlight, dropping out of showbusiness entirely for a few years in the mid-2010s in order to care for her sick father. The film she’s discussing today, the independent science-fiction thriller I Am Mother, was shot in Adelaide in 2017 not long after she returned to work.

At the time, Swank was juggling two other projects, which coincidentally share with I Am Mother the theme of parents and children—the feature What They Had, where she starred as a woman whose mother (Blythe Danner) is afflicted with Alzheimer’s, and the TV series Trust, where she played the mother of kidnapped oil heir John Paul Getty III (Harris Dickinson).

“It was kind of a mad rush to get them all done around the same time,” she recalls over the phone from New York. “But it was definitely an entertaining ride.”

Swank’s performances suggest a highly focused, level-headed personality behind them, and this is borne out in conversation. Her tone is friendly and straightforward, her answers carefully considered, suggesting that she approaches being interviewed as seriously as every other aspect of her job.

“I don’t take roles because I see them as being Academy Award worthy,” she says when asked specifically about her past success and how it affects her current career choices. 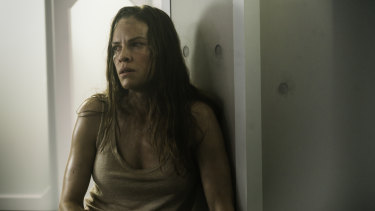 Hilary Swank in the post-apocalyptic tale I Am Mother, which was filmed in Adelaide.Credit:Netflix

While she’s grateful for the recognition, what she looks for are characters that will challenge her — that call on her to rethink how she walks in the world, as she puts it, in both a figurative and literal sense.

As she points out, in I Am Mother she plays a supporting though crucial role, given that she’s one of only two main cast members whose faces are visible on screen.

The feature debut of Perth-based director Grant Sputore, the film takes place after an apparent global apocalypse, in an underground bunker where the nameless teenage heroine (Danish newcomer Clara Rugaard) is raised by a droid she addresses as “Mother” (played physically by Luke Hawker, and voiced by Rose Byrne).

Their life together is disrupted by the arrival of Swank’s character, a bleeding woman who pleads for admittance to the bunker, and who subsequently casts doubt on Mother’s motives and on the true nature of the world outside.

While I Am Mother was conceived by Sputore and writer Michael Lloyd Green with a genre audience in mind, Swank admits that she’s no great fan of science fiction.

Rather, what drew her to the script was the strength and mystery of the character .

“How does someone have the fortitude, both physically and mentally, to make it through a post-apocalyptic world that it doesn’t seem like anyone else is living in? That was fascinating to me. Like, what makes someone even want to continue living in that space?” 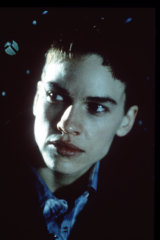 Parts of the plot hinge on whether Swank’s character is telling the truth about her experiences. Right up to the end, certain mysteries linger — although Swank says she was conscientious about working out the answers in her own mind. “I do my backstory, and I have an understanding of what brought her to where she is.”

At the same time, it was important not to go too far beyond what was explicitly set out in the script. “You want to leave a little bit of it to the imagination so that it makes you ask questions.”

Some of the biggest challenges, she says, were physical — again, literally a matter of walking in the world, in this case as someone with a serious injury. “At the end of a 15-hour day, I had to get chiropractor adjustments,” she says. “It was very difficult, more difficult than I actually imagined from reading it.”

I Am Mother is a story in which men play almost no direct role, but Swank is reluctant to read too much significance into this: “It’s nice to have a movie with three female leads” is as much as she’ll allow. Still, given that most of her scenes are one-on-one with Rugaard, did she see herself as any kind of mentor to her younger co-star?

Yes and no, Swank says, describing her relationship with Rugaard as that of a caregiver: “You want to make sure that they’re having a great experience and that they have as much time as they need to figure it out.”

On the other hand, she had no desire to steer Rugaard down a specific career path. “I’ve been in the business for so long, and I have my experience of it, and I don’t want to project that onto her.” 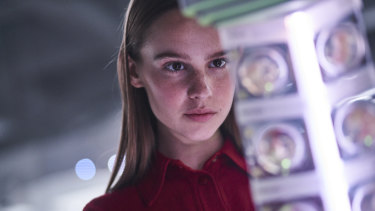 Clara Rugaard as Daughter in I Am Mother.Credit:Netflix

Rather, the learning experience was a mutual one. “It’s so refreshing to work with someone who’s new, and hasn’t had a lot of experience, and how they show up differently. They show up very open-minded. And that’s also always a good reminder for myself, so we help each other in that way.”

The idea of experiencing things afresh comes up from a different angle when I ask what it was like for her working in Adelaide. “I love Australia,” she says with enthusiasm, stretching out the vowel in “love”.

Despite being indoors for most of the shoot (or perhaps because of this), what she appreciated especially was the unfamiliarity of the natural world: the wide-open sky, the calls of birds. 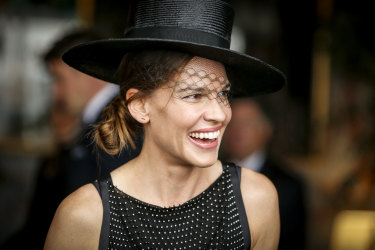 ”I love Australia”: Hilary Swank at the 2015 Derby Day in Melbourne.Credit:Eddie Jim

Her process, it seems, is about discovering the new, and, equally, about identifying the aspects of each of her characters she can recognise and connect with.

Swank has always had a special gift for portraying intense suffering, physical and mental as she does in I Am Mother, where her character is in a state of distress throughout the film, and as she did as an aspiring boxer in Million Dollar Baby and as a victim of transphobic violence in Boys Don’t Cry.

The key, she says, is empathy.

“I think that we all suffer, right? And whether we suffer about the same thing is beside the point. The point is that suffering has the same feeling inside, to different degrees.”

Swank acknowledges that this sort of empathy will only take you so far — that in Boys Don’t Cry, for instance, she “only scratched the surface” of what her character, trans man Brandon Teena, might have gone through in real life.

But she believes that simply making the attempt can be enriching in itself. “It’s being able to empathise, put yourself in someone else’s shoes, and have an idea what that must have felt like, to experience whatever they did.”

I Am Mother is released on Netflix on June 7.