The all-male revue Chippendales didn’t truly take shape until choreographer Nick De Noia came on board. Similarly, Hulu’s new drama Welcome to Chippendales gets a significant boost midway through the premiere when Murray Bartlett shows up as the Emmy-winning director with Big Ideas who quickly partners with Kumail Nanjiani’s Somen “Steve” Banerjee.

TVLine recently chatted with Bartlett, who earlier this year took home his own Emmy for playing beleaguered hotel manager Armond in HBO’s White Lotus. Topics included: Fabio, dancing with dishtowels and an “incredibly challenging” aspect of mirroring choreography. Read on for his thoughts.

TVLINE | I know what my preconceived notions of Chippendales were, going into all of this. What were yours?
I had no idea of any kind of backstory. So, I just think, like campy, fun, male burlesque show, really, with these guys that always seemed to have like unusually long hair and kind of reminded me of Fabio, you know? That was the look.

TVLINE | I think people thought straight women wanted that, right? Like, that was it.
What were they thinking, Kim? [Laughs] But so, it turns out, a lot of people did. 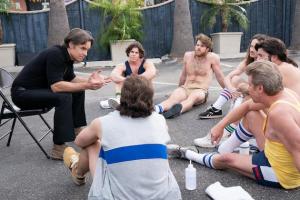 TVLINE | It also seems a little pure and quaint now, considering how social standards have changed in the years since and what you see in pretty much any popular media.
Right. Yeah. I think you’re right. It was burlesque, really, right? Because they never showed the full kit.

TVLINE | Right.
There were always things covered, and there was this sort of air of mystery and holding back a little — I think not in the beginning of Chippendales, from what I know of the original L.A. club, but it definitely evolved into that. Yeah.

TVLINE | We meet Nick at what seems like a low point in his life. When you’re watching Unicorn Tales [aka the show for which De Noia won his Emmys] with a glass of wine in the afternoon, it’s probably not a good thing.
Have you watched Unicorn Tales? It’s so brilliant, I think.

TVLINE | I actually have not seen it, but I will try to find it if it’s good.
Find it on YouTube. Yeah. It’s good.

TVLINE | Do you think he would’ve ever taken on something like Chippendales had he not been at that low place in his life/career?
I mean I think it’s hard to separate it. He’d had high points, and he won two Emmys for Unicorn Tales. It was a kids’ show. So, it wasn’t quite what he had in mind for the sort of the manifestation of his creative genius, I think. And yeah, you’re right. He is kind of at a low point, or moving into a low point, when we meet him at the beginning of the show.

So, he’s even moreso looking for that kind of avenue to pour all his creative energy into, but I think he was always looking for that. It was just that it happened that he was in this place, and then Chippendales kind of appeared, or this opportunity appeared, and he was like, “This is it, I can do it with this.” So it was a combination of him being fiercely ambitious, always looking for a creative outlet. I feel like he’s this body that just can’t contain all this incredible creative energy that he has. So when it came along, he was like, “This is it. This is my thing.”

TVLINE | You’re no stranger to taking parts that are physical — like in Physical. Correct me if I’m wrong, but you are not a trained dancer, right? These are skills you’ve developed over time?
[Laughs] I love that you’re asking that, Kim, but no, I’m not a trained dancer.

TVLINE | Well, you move better than I do.
Had great choreographers.

TVLINE | Do you think it’s harder to pull off looking like you know what you’re doing when you’re moving solo — like when Nick is choreographing with the dishtowel in Episode 2 — or in a scene where he’s teaching the choreography to the group of guys?
I mean, there’s joy in it for me, having the focus on me, pretending that I’m a dancer. I like leaning into that and being able to play that. The thing that was most challenging for me was — because the choreographer is meant to be sort of not the best dancer but to know the moves through and through — I had to do this routine where I’m teaching the routine to the dancers where I’m mirroring them, first, doing the routine but like opposite to what they’re doing, and then turn around and do what they’re doing.

So, as a non-dancer, that was incredibly challenging and incredibly satisfying. Because I did it, but after many hours of practicing that and having great choreographers who helped to create moves that were not beyond me. But yeah, I love a challenge as an actor, and that kind of physical stuff is a great challenge that I love to try and meet. So, it was joyful for me and kind of thrilling.