After 13 years in the wilderness following “Coraline” and the ill-fated passion project “The Shadow King,” Henry Selick returns to form with “Wendell & Wild.” It’s an afro-punk celebration made in collaboration with Jordan Peele (“Nope”) that redefines stop-motion animation with a 2D aesthetic and more experimental approach.

The Netflix Oscar contender follows Black teenage orphan Kat (Lyric Ross), who makes a bargain with demon siblings Wendell (Keegan-Michael Key) and Wild (Peele) to bring her parents back to life. Selick’s admiration for Key and Peele’s eponymous sketch-comedy series led to their involvement, with Peele taking an active role as producer and co-writer, emphasizing the subversive horror/comedy ethos that he’s established through his Monkeypaw Productions label.

For animation supervisors Malcolm Lamont and Jeff Riley (both stop-motion vets from Laika), this reunion with Selick was a DIY-like departure from “Coraline,” with a smaller crew working in a more confined studio space outside of Portland. For “Wendell & Wild,” they embraced a rougher, more handmade style of stop-motion, in which maintaining the 2D look of the concept art was encouraged by Selick, as was retaining the seam lines on the puppet faces. And, with such graphic, angular faces from concept artist Pablo Lobato, they had something unique to work with.

Lamont told IndieWire that the animators were keen on staying true to Lobato’s artwork, but it posed a challenge for 3D-printing the characters’ face replacements. “You’d see these weird lines in Pablo’s drawings,” he said. “What does it look like when you turn? Does it have an edge? Does it have an actual return on it? We wanted, from any angle, to keep the 2D design.”

To be economical, they limited their library of facial expressions to only what was emotionally called for in a scene (cutting down on the in-betweens). For Kat, the conflicted protagonist who’s forced to confront personal demons along her heroic journey, they went for the most sophisticated, naturalistic performance. “We definitely had more choices for her,” Riley added. Yet her body had a quirk in that her legs were different lengths, which became most apparent when she kneels down beside a gravestone. 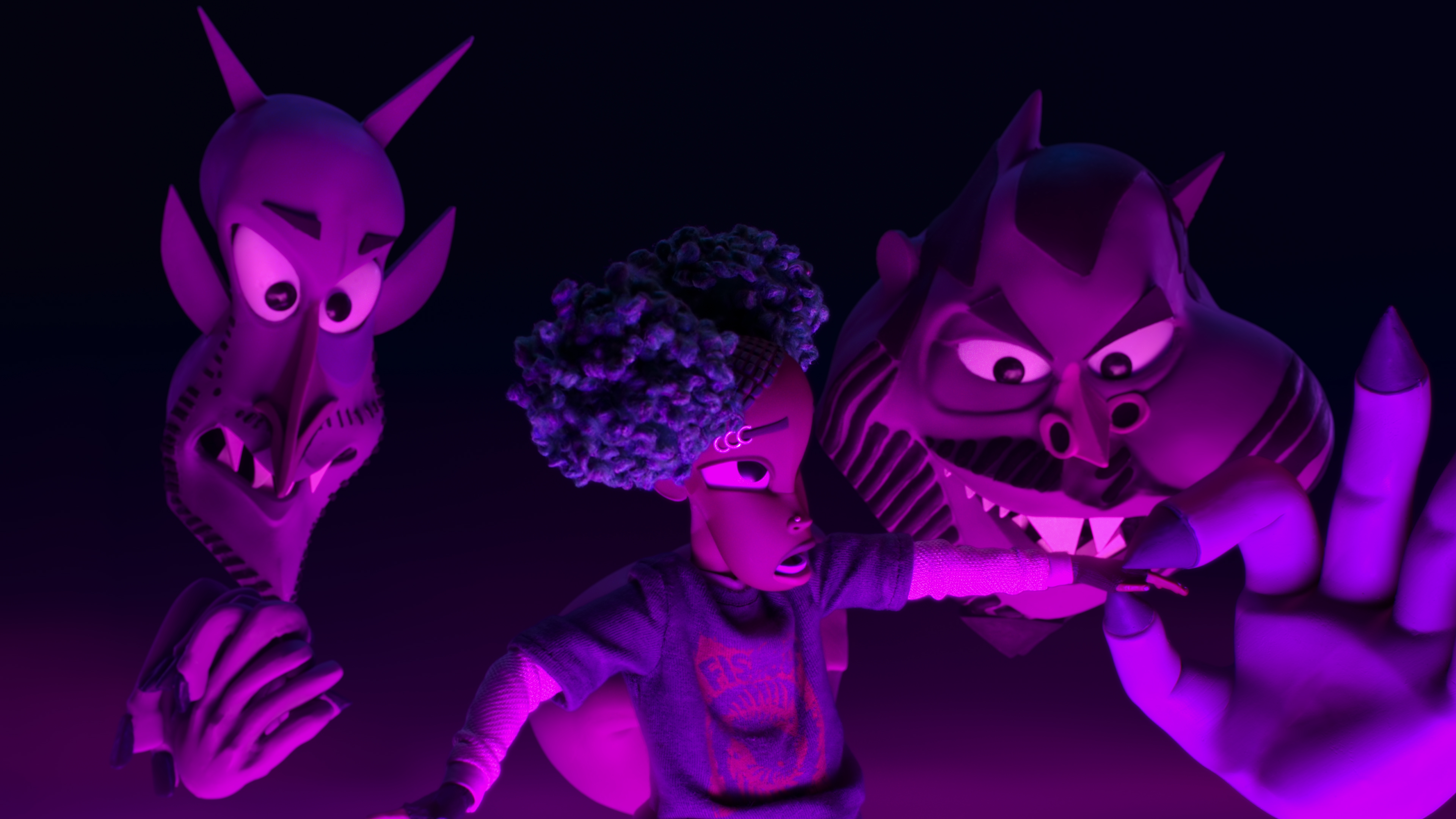 At Selick’s request, the more caricatured and comical Wendell and Wild had two sets of faces: One for the underworld and one for the human world. “In the underworld, their faces looked like bas-relief sculpts with crazy mouths,” Lamont said. “They were specific to angles and words. It’s like cutout animation. For turning the head, you needed several different facial positions, including three-quarter. They were sculpted in clay and scanned. We were convinced it wasn’t gonna work, but it was extremely entertaining because of the comedy Key and Peele brought to it.”

A more bizarre version of the siblings was built for their first encounter with Kat, to whom they appear in a nightmare as giant floating faces and hands. As inspiration for the scene, Selick sent Lamont and Riley a YouTube video of a finger puppet whose facial features could be elongated and squashed via tubes on the back of the toy. “It was kind of creepy and funny and he said he wanted to do the Wendell & Wild faces like this,” Lamont said. “So we built 12-inch giant silicone faces and on the back they were hollowed out, and they had armatured pieces poked into the eyebrows and around the mouth. So the animator had them on these giant rigs that allowed them to float around the set. You could stretch the faces and pull the eye socket right over so you could see the eyeball floating around inside there. This was insane and we didn’t know what people were going to think of it. It was a weird, surreal version of already weird, surreal characters.” 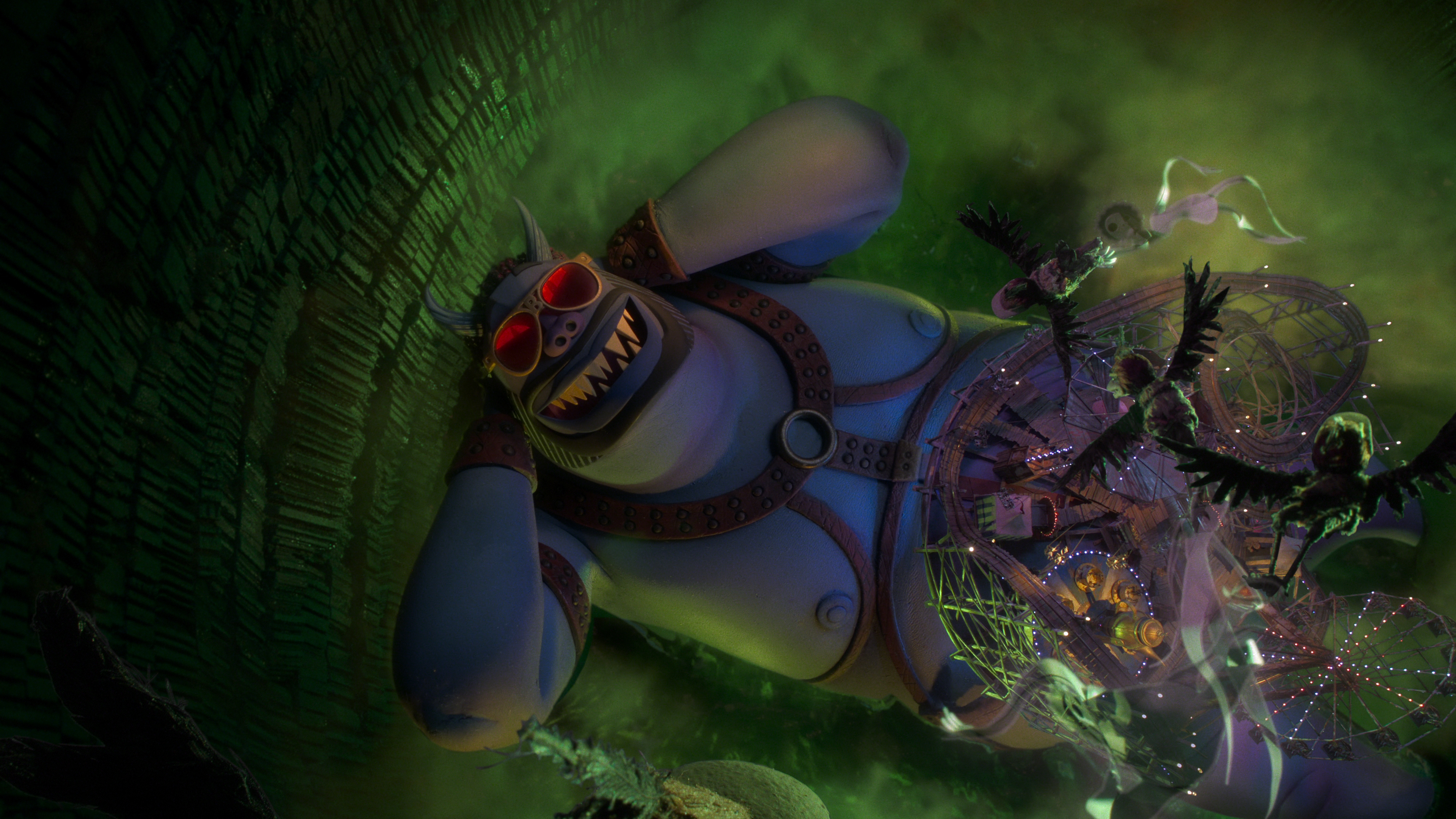 The most technically challenging puppet proved to be Buffalo Belzer (Ving Rhames), a giant demon whose belly is home to the Scream Fair, a theme park of the damned. There were several Belzer puppets, both large and small, including a 16-foot hero puppet and 6-foot hands. “He’s naked and virtually made of all silicone, which looks like flesh but weighs a lot,” added Lamont. “He needed a lot of external support with the motion-control rigging just to have him lying in his pool of boiling oil.”

Another one of Selick’s 2D-inspired ideas involved the souls doomed to ride the Scream Fair’s torturous attractions. To achieve the desired cutout animation look, the puppets were made out of tin and then coated with silicone and affixed with magnets and bolts for a flowing, ripply effect. “I worked out an animation cycle of them rippling,” Riley said. “We 3D-scanned it, and then printed out hundreds of replacement cycles for the smaller ones in groups in wide shots, which were about an inch tall. They were super fragile because they were so small.” 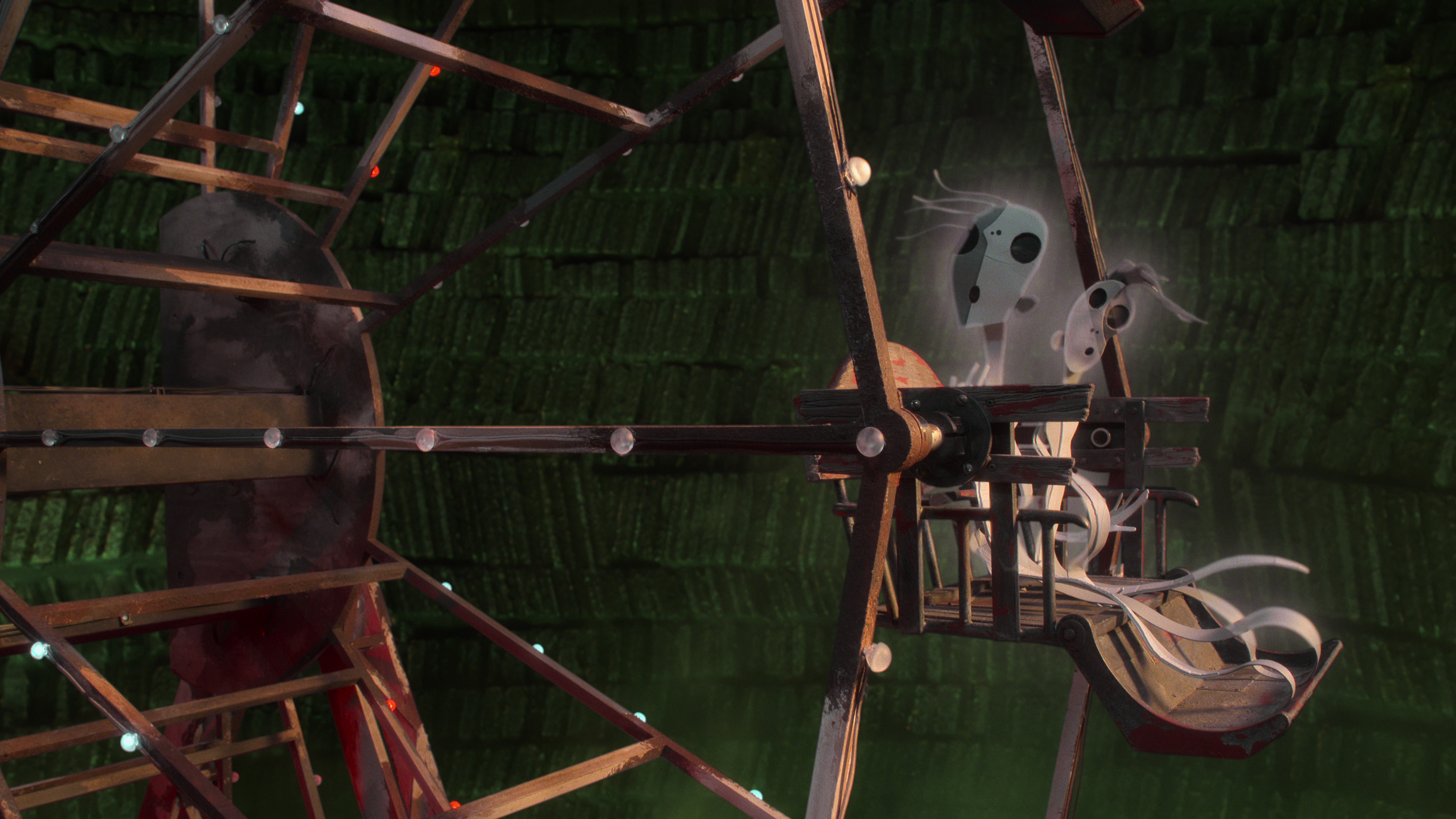 Selick also carried over the idea of doing shadow puppets projected onto the wall from “The Shadow King.” This was reserved for the intense “Redemption Chamber” sequence in which Kat relives her terrifying past. Taking inspiration from the shadow-puppet work in “Harry Potter and the Deathly Hallows: Part 1,” the director and animation supervisors employed a combination of stop-motion animation and very imaginative CG — after it was realized that traditional cutouts would be too limited in their motion and too time-consuming.

“Henry was pragmatic enough to accept the advantage of CG here,” Lamont said. “A special team required to pull off all the individual cutouts was overwhelming. One person could go off and take five or six months and build everything in the computer. We tried to work in the way a face changes if we were doing face replacement in stop-motion. Instead of being super articulated from one shape to another, we [toned it down]. We then brought in extra animators to finish the sequence and everyone was also a stop-motion animator. 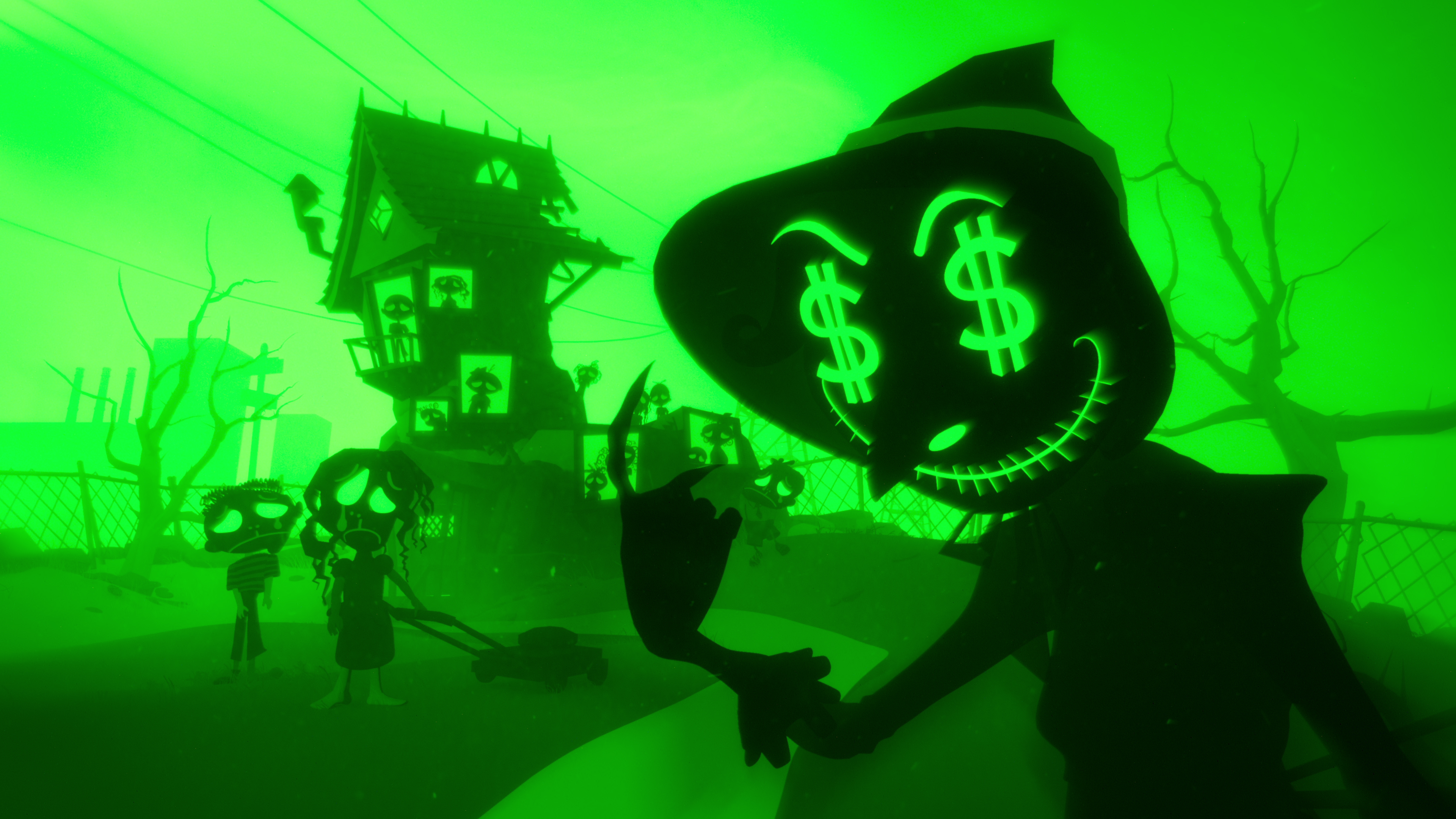 “What was great was Henry had a wild suggestion, and whatever was best for a specific scene, we’d go for it, whether it was changing scale or using a completely different technique,” Riley added.