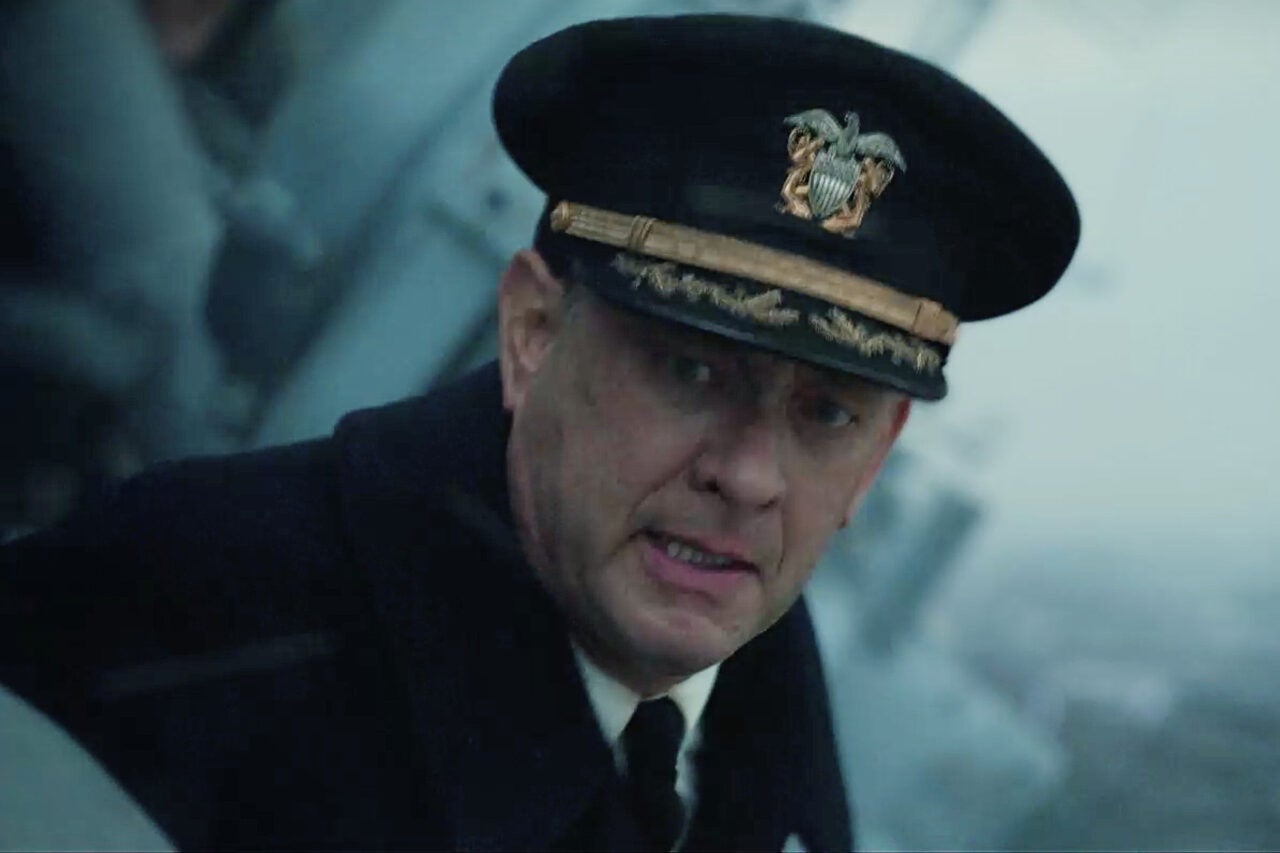 The taut Tom Hanks action film “Greyhound” is set in the middle of the Atlantic Ocean in 1942, as a convoy of battleships dodge enemy torpedos. Practically the entire movie was filmed on sound stages or aboard the docked U.S.S. Kidd in Baton Rouge, Louisiana. Visual effects provided the aesthetic reality — but sound effects deliver the visceral, you-are-there quality that makes the scenes whizz and whoosh.

“Greyhound” was rewarded with an Oscar nomination for Best Sound, the first film released by Apple TV+ to receive Oscar attention. (The company’s “Wolfwalkers” was also nominated in the Animated Feature race.) The four sound mixers, Warren Shaw, Michael Minkler, Beau Borders and David Wyman, talked to TheWrap about the aural design of one specific scene, which you can watch below in three different sound versions.

The scene finds Hanks anxiously navigating his gargantuan ship as it is fired upon by two simultaneous torpedos. “The goal in this scene is to portray the urgency and terror of being on the offense in battle,” Minkler said. “And then to have to instantly go on the defensive to save the ship and crew.”

Shaw took a trip to the U.S.S. Kidd after filming had wrapped there. The visit was essential for the film’s sound design. “I was given a personal tour by a small group of World War II veterans” he said. “I heard from these men what it was actually like to be on a ship like this: to feel the crashing waves, to hear and to shoot the guns, to man the sonar, to survive for weeks in the claustrophobic quarters. It was moving, humbling, and as important as any other research I did.”

Wyman also spent time aboard the docked ship. “The veterans working on this floating museum showed great pride and knowledge,” he said. “The sonic environment we created for our actors was key to their filmmaking experience and it allowed us to do justice to those brave men who served.”

Listen carefully to this first version of the scene for what you do not hear. You’ll hear the carefully recorded dialogue of the actors and the intense musical score by Blake Neely, but the special sound effects are absent. Very early in the clip, watch the coffee mug that falls and breaks without making a sound.

Enjoy the dialogue now, because it won’t be as audible in the next two clips. For their roles, the actors strived to achieve the authenticity of naval commands on a ship at war. In addition, the original 1940s-era communication equipment were carefully modified to all members of the team to use speakers and headphones in a live format.

“What we hear are a series of commands for ships heading, sonar reports and lookout reports,” Wyman said. “Even when the actors were unseen by camera they were heard through our created comms channels directly to the actors ears via headphones, speakers  and ships phones. The actors were frequently in areas completely off set, using specially created voice channels piped directly to the original  equipment from the 1940s. The net result was a truly immersive  experience for the actors,  allowing for a fast-paced, continuous flow of dialogue and action.”

Version 2: With Only the Special Sound Effects

Here you’ll hear everything that was missing in the previous clip. And in every way, it’s a lot: waves, wind, artillery fire, creaking metal, cranking tillers, the hiss of incoming torpedos. And yes, the coffee mug crashing to the floor.

The layers of sound add to a sense of chaos and heighten the tension. “This scene is a prime example of how the many layers of sound played a crucial role is keeping the momentum,” Borders said. “We hear the constant firing of the cannons and guns, and the ship’s groaning and pounding through the waves acts as a response to the captain’s commands for maneuvers.”

Borders mentioned that the whirring of the torpedoes subtly mimicked a ticking clock as the weapons rush closer to the ship. When we see the torpedoes through the water, there is also the harsh, unsettling noise of a high-pitched engine acceleration. “It’s such a fun challenge trying to keep the soundscape feeling authentic,” he said, “while also picking moments to bend reality for dramatic purposes.”

Here you can see how elements of the previous two clips combine to form the scene, as it appears in “Greyhound.”

“It was a very rewarding experience for all of us at the end,” Minkler said. “We were all so full of joy and pride at what we accomplished.”

“Greyhound” is available for streaming on Apple TV+. The Oscars will air on April 25.