110,000 fake health passes are circulating in France where they are needed to access public transport or restaurants

Some 110,000 fake health passes are in circulation in France, the interior ministry said Thursday, with hundreds of investigations launched against the makers and users of the forged documents.

The health pass, showing proof of vaccination, Covid recovery or a recent negative test result, is required for access to public transport, restaurants and cultural events.

As they investigate users and distributors of the fake documents, police have found that medical staff is sometimes complicit in the fraud, said Interior Minister Gerald Darmanin. 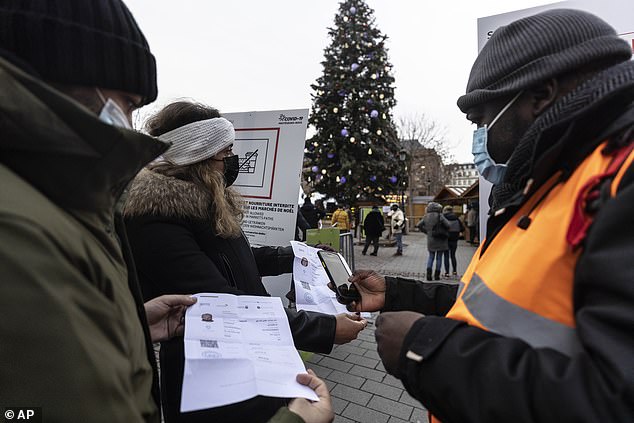 Some 110,000 fake health passes are in circulation in France, the interior ministry said Thursday, with hundreds of investigations launched against the makers and users of the forged documents. Pictured: Security personnel check a COVID-19 health pass to access a Christmas market in Strasbourg, eastern France, December 3, 2021 [file photo]

‘The problem with the fake health passes is that they often involve the collusion of real doctors or real nurses,’ he told the France 2 broadcaster. This makes offences ‘very difficult to prove’.

The ministry said 110,000 fake health passes are currently in circulation, but they have not revealed how they know that figure.

Some 100 people had been arrested as a result of 400 investigations since the health pass became mandatory in parts of public life, Darmanin said.

They risk up to five years in prison, he said, adding that some have already been sentenced to suspended or actual jail terms.

Last month, a doctor who allegedly sold at least 220 fake health passes in the Paris region was charged and detained.

Darmanin said he was in favour of dropping cases against users of fake health passes who agreed to get a real one legally instead.

The French government has warned that the number of Covid patients in intensive care could reach 4,000 during the Christmas season, compared to 3,000 now. 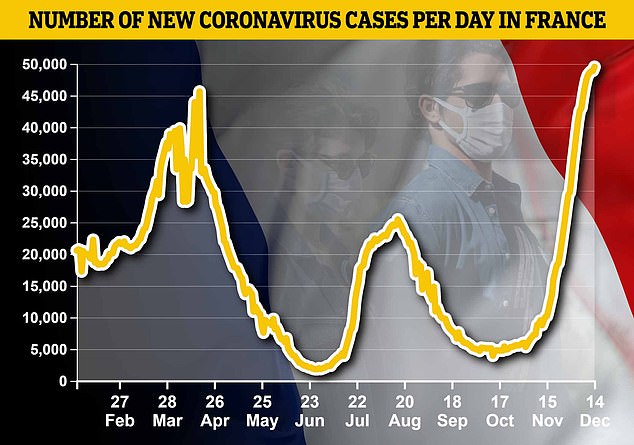 France reported on Tuesday over 63,400 positive Covid tests, the highest figure since April, while almost 2,800 people are in intensive care with the illness. Pictured: A graph showing the seven-day rolling average of new Covid-19 cases in France 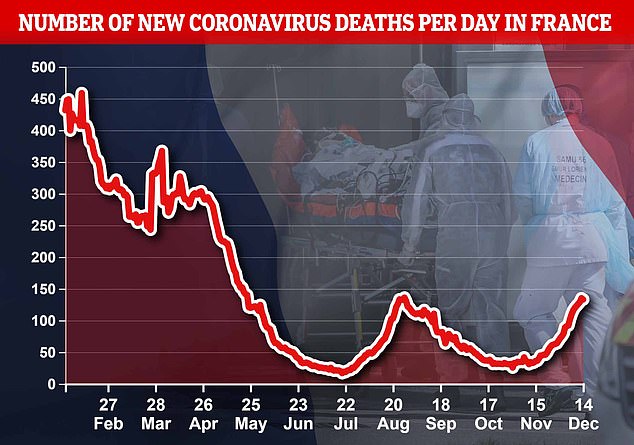 It is promoting booster vaccine shots to control the worst of the onslaught of the Omicron variant, and has warned that health passes will no longer be valid from mid-January unless holders get a vaccine top-up.

The new rules meant that over-65s in France without their Covid-19 booster jabs lost their health pass yesterday.

People in the 65 plus age group who have failed to take up the booster shot will see the QR code in their health pass generated by a mobile phone app automatically dis-activated.

The rule, which further tightens one of the tightest health pass systems in Europe, will from January 15 be expanded across all age groups.

The only option for people without a booster – other than to get one – will be to have a negative test a maximum of 24 hours old.

France has already carried out almost 16 million booster shots and is confident of reaching its target of 20 million before Christmas.

The booster is now seen as a key weapon in defeating the Omicron variant which experts believe spreads faster than previous Covid variants and could become dominant in Europe in the next few weeks.

France reported on Tuesday over 63,400 positive Covid tests, the highest figure since April, while almost 2,800 people are in intensive care with the illness.

Over 76 percent of people have been double vaccinated in France and children deemed at risk can be jabbed from Wednesday, with vaccinations soon also expected to fully opened to the very young.