A Louisiana State University student who died after she was hit by a car while on her way home from a bar was allegedly raped shortly before the fatal crash, authorities said.

Madison Brooks, 19, was struck by a car while on the roadway early on Jan. 15 and died at a local hospital, authorities said. The driver, who was determined not to be impaired and contacted emergency personnel immediately, has not been charged, the sheriff’s office said.

Within hours of the deadly incident, Brooks was captured on surveillance footage stumbling and falling at a Baton Rouge bar, before leaving with the four suspects, according to the arrest warrant affidavits.

Kaivon Washington, 18, and a 17-year-old male were arrested and charged with third-degree rape, court records show.

Carver, Lee and Washington were booked on Monday and appeared in court for a bond hearing Tuesday morning, during which their bail was set at $50,000, $75,000 and $150,000, respectively, according to the East Baton Rouge Clerk of Court. 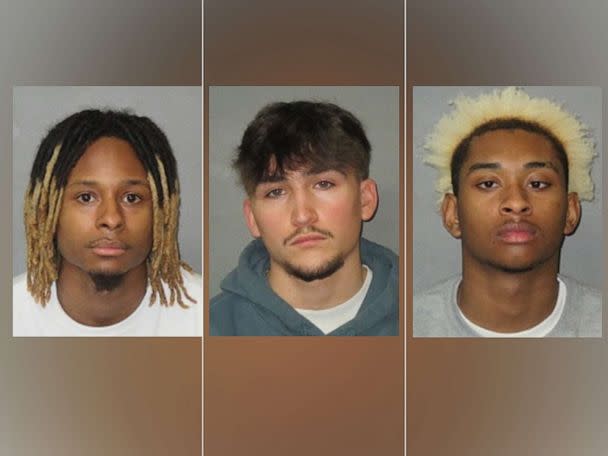 The 17-year-old was booked into juvenile Detention and has not been identified by the sheriff’s office because he is a minor.

The four suspects met the victim at the bar, Reggie’s, and were taking her home, when two of them allegedly raped her, according to the arrest warrant affidavits.

During an interview with detectives on Jan. 16, Carver reportedly stated that while walking to his car from the bar, Brooks “was very unstable on her feet, was not able to keep her balance, and was unable to speak clearly without slurring her words,” the affidavits stated.

Carver reportedly told detectives that she had asked for a ride home and “he admitted that he agreed to give her the ride because he did not want to leave her while very intoxicated and the bar was closing,” according to the affidavits.

Carver stated he asked for Brooks’ address but “she fell over and could not answer him,” according to the affidavits.

Carver and Lee, who was identified as Washington’s uncle, allegedly remained in the front seats of the car the entire time, according to the affidavits.

Brooks was hit by a car while in the middle of a roadway near the subdivision shortly before 3 a.m., about 50 minutes after leaving the bar, authorities said. Her blood alcohol content upon being admitted to the hospital was .319, according to the affidavits. The state’s legal limit to drive is .08.

When asked if Brooks was too impaired to consent, Carver allegedly replied, “I guess,” according to the affidavits.

The 17-year-old suspect and his mother did not want to provide a statement to detectives, while Lee reportedly confirmed to detectives that he was in the passenger seat that night, according to the affidavits.

In a phone interview with ABC Baton Rouge affiliate WBRZ before his surrender, Washington denied raping Brooks and said the sex was consensual, WBRZ reported.

His attorney, Ron Haley, also denied the rape allegations and told WBRZ that they have video proof that refutes the claims.

Attorney information for Carver and Lee was not immediately available.

In a statement to the school community following news of the arrests, LSU President William Tate called this a “horrific scenario.”

“Madison was a daughter, a granddaughter, a sister, a niece, a classmate, and a friend to many of you,” he said. “By all accounts, she was an amazing young woman with limitless potential. She should not have been taken from us in this way. What happened to her was evil, and our legal system will parcel out justice.”

Tate also condemned that Brooks and three of the suspects were underage yet “able to consume alcohol at a local bar.”

“As such, our action plan starts with a deep and relentless focus on any establishment that profits off our students by providing alcohol to underage individuals,” he said. “In the coming days, we will call a meeting with these business owners to discuss how their responsibilities directly impact the safety of our students. We will work openly against any business that doesn’t join us in efforts toward creating a safer environment for our students. Enough is enough.”

State regulators announced on Tuesday they have temporarily suspended Reggie’s liquor license over “recent incidents at this establishment.”

“Due to the seriousness of the allegations and the potential threat to public safety, an emergency suspension will be issued today,” the Louisiana Office of Alcohol and Tobacco Control said in a statement. “This action immediately suspends the service or sale of alcoholic beverages at this location. An emergency hearing will be held next month to determine what penalties (if any) should be imposed following a presentation of the evidence.”

In a statement to WBRZ, Reggie’s said the bar’s owner “has fully cooperated with the East Baton Rouge Sheriff’s Office, Louisiana State Police and the East Baton Rouge [Alcoholic Beverage Control] office since their first requests for assistance in their ongoing investigations and will continue to do so.”