In the past week, Benjamin Nichol has slept in a paddock and an empty house, and will now sleep in a tent until he can go home.

The 26-year-old theatre director lives in a share house of four young people in Northcote, and the household, except for him, has come down with COVID-19. 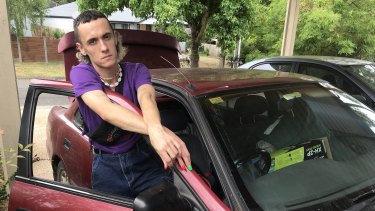 Benjamin Nichol is on the road with a friend as the try to avoid COVID-19 which has spread through their sharehouses.Credit:Daniel Sewell

Just by chance, Mr Nichol had not seen his three housemates in the lead-up to them testing positive on Monday and had a window to get out and stay negative. He paired up with an unexposed friend whose own housemate had also tested positive.

“The both of us were like, ‘well, we’ll jump in the car and we’ll just go camping for a few days and see if we can wait this out until our houses are safe again’.”

“We ended up at this place in Kilsyth through an app online where people with these big properties let you camp in the corners of paddocks or their backyard, which was the only place we could find.”

After three nights in Kilsyth, the pair spent two nights house-sitting an empty house owned by a relative in Ringwood North and on Saturday were headed to Phillip Island to camp until they could safely return home.

Mr Nichol’s housemates, aged between 24 to 26, work across different industries: retail, events and finance. He and his mate, Daniel, had considered just surrendering to the virus and going home but seeing how unwell his housemates had become this week made camping the easier option.

“I’ve got too much sort of going on work-wise at the moment, I can’t afford to be that sick for a week,” Mr Nichol said.

Victorian authorities this week revealed that 40 per cent of all new COVID-19 cases were being detected among people in their 20s. Five per cent of Victorians in that age group have the virus. In NSW, the age group represents 30 per cent of all infections recorded in the past week with 69,906 new infections – far outpacing the second largest group of 40-somethings which recorded 43,318.

The “pandemic of the young” is contributing to supermarket shelves going unstocked and hospitality venues closing due to lack of staff, but it’s also causing mayhem in the lives of young housemates. 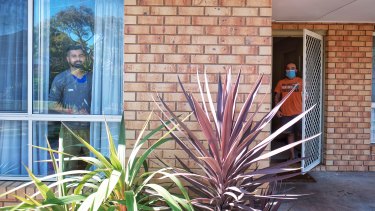 Until recently in Victoria, infected people unable to properly isolate at home were offered a free stay in hotel quarantine, but Victorian Health Minister Martin Foley said on Saturday that due to the “sheer numbers” of local cases, it was “simply not possible to accommodate everyone”.

It means share-house members, such as 32-year-old PhD student Dipjyoti Goswami and his four housemates need to manage infection-control themselves.

Mr Goswami is one of three COVID-negative housemates in a five-person house near Bundoora in Melbourne’s north-east.

“It’s not easy,” he said. The two positive housemates are staying confined to their rooms and getting food delivered through delivery apps, while the other three who are still negative are wearing masks and constantly sanitising communal areas.

There are two bathrooms in the house, so those without the virus can use the same one. But one positive housemate has to travel through the house to reach the designated “positive” bathroom.

“He passes through the kitchen, there is no other way,” Mr Goswami said.

“Even though he’s wearing a mask, it’s stressful. In my family back in India, when COVID was at its peak, I saw my sister and my father both at ICU, so I know how severe it can be.”

While the situation for housemates is stressful, some have tried to make the best of a bad situation.

The six-person Sydney share house where 24-year-old law student Christian Holman lives has become a “COVID commune” as one housemate after another became positive over the past fortnight.​

Mr Holman’s housemates began to turn positive over the Christmas period, and even those who tried to get out early and hide out at their partners’ houses eventually contracted the virus, too.

At that point, Mr Holman’s house decided to fling open the doors as a house where anyone within their social circle who was COVID-positive could come and stay.

“Our house had six or seven positive people in it at the end – anyone whose partners who didn’t want to infect their own housemates in their respective share houses, we said ‘come on in’,” he said.

The group named their COVID fraternity “Delta, Delta Omicron” and made a documentary about their time together.

Mr Holman said in his social network, everyone who had turned positive and lived in a share house had passed it onto their housemates.

“People do try it for like a few days before they end up dropping anyway which is quite concerning,” he said.

The silver lining was that most members of the household got the virus at the same time.

“Because in a shared house of six people if we’d all got it individually, we’d all have to isolate as close contacts probably cumulatively for a month.” Mr Holman said