Australians who are fully vaccinated will have the chance to win a $1 million prize as part of a new lottery created by a philanthropic group.

Following the lead of major Vax-a-Million lotteries in the United States, the Million Dollar Vax competition will launch on Monday for those who get both jabs before mid-December.

With a prize pool of $4.1 million, the campaign has been created by the Million Dollar Vax Alliance, comprising a group of philanthropists and corporations that hope to push national vaccination rates above 80 per cent.

Craig Winkler, co-founder of software firm MYOB and part of the Million Dollar Vax Alliance, said the free lottery aimed to “reward people who decide to be vaccinated now rather than waiting”.

“The aim is to accelerate Australia’s COVID-19 vaccination program in a safe way throughout the month of October,” he said.

“The faster we reach higher vaccination rates nationally, higher than 80 per cent, the sooner we all can safely resume our full range of community and business activity.

“The purpose of the promotion is not to convince people to be vaccinated. That’s a decision you should make in consultation with a health professional.”

The move comes just days after the Victorian government announced it would mandate about 1.25 million authorised workers to get at least one jab by October 31, following similar mandates for healthcare workers and the construction industry.

Victorian Premier Daniel Andrews said he supported any measure that would drive up vaccination rates, saying high vaccine coverage was “our only way out of this” pandemic.

“It’s great … anything we can do to encourage people,” he told reporters on Sunday.

“I’m not so fussed by what motivates you, whether it’s for your health, the health of the people that you love, to protect their health system … or to win $1 million. Just go and get vaccinated.”

The US state of Ohio has held lotteries offering $US1 million ($1.38 million) to people who had at least one shot of a coronavirus vaccine.

More than 2.7 million Ohioans initially entered, with a full scholarship to college offered for children aged 12 to 17.

The idea gained traction across the country, as states such as Colorado, Maryland and Oregon offered similar incentives to boost waning vaccination rates. 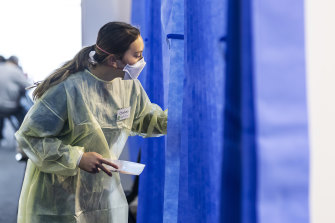 A health worker in a vaccination hub at Whitten Oval on Saturday.Credit:Daniel Pockett/Getty Images

The Australian version of the scheme is also offering weekly draws of $1000.

Philanthropy Australia chief executive Jack Heath said the campaign was a “collaborative, targeted intervention that will save lives, ease the burden on healthcare workers, and benefit the wider community”.