A nation of fat cats: Nearly half of Britain’s felines are obese with more than 50,000 suffering from diabetes

More than three million cats in Britain are overweight and more than 50,000 cats have diabetes.

A recent survey by Cats Protection shows that more than a quarter of the 2,000 cat owners polled admitted to overfeeding their pet since the lockdown in March 2020.

Owners can put their fat cats in a clinical trial by the Royal Veterinary College in the hope of losing weight and eventually reversing their diabetes with a strict diet.

One pet cat on the trial weighed almost two stone at 12kg when it was diagnosed with diabetes, only for it to reverse and go into remission after the trial.

The study will also look at whether the microbiome in a cat’s gut changes like what happens to humans who reverse their diabetes. 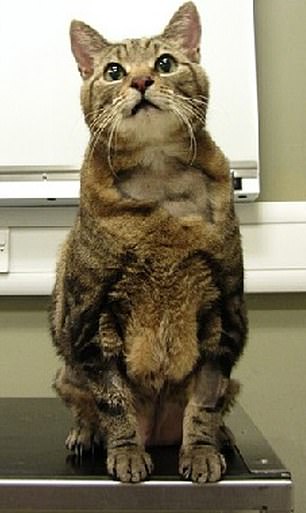 She told The Telegraph: ‘I have watched Lester turn back into a happy, affectionate, playful cat again as the symptoms of his diabetes has disappeared and for that I am eternally grateful’.

The Diabetic Remission Clinic team will give overweight diabetic cats a therapeutic diet so they can lose weight.

To apply for the trial cats must be overweight and have been diabetic for six months.

The cats will get an ‘underlying disease assessment’ at the Queen Mother Hospital for Animals.

They will then be looked at again in several re-examination appointments.

They will then get a whole year of an ultra-low carbohydrate diet which will be free to owners.