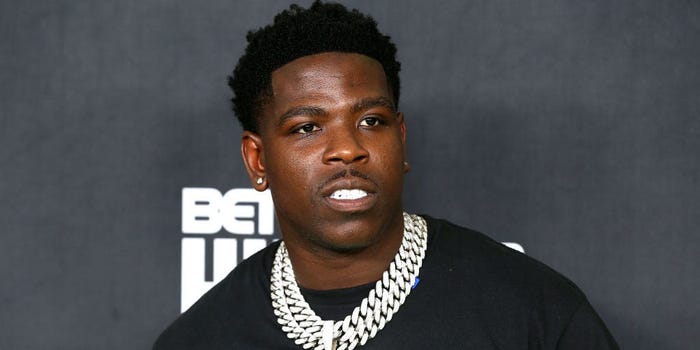 Eighteen members of a New York street gang were charged in a 16-count indictment this week, and among those facing charges is rapper Casanova.

In the indictment that was unsealed this week, federal prosecutors say Untouchable Gorilla Stone Nation gang member Brandon Soto participated in, and facilitated the murder of 15-year-old Jalani Jones in Poughkeepsie, New York, in September, while other members have been accused of assaulting and attempting to kill rivals, dealing drugs including cocaine and marijuana, and committing firearm offenses.

Casanova, whose real name is Caswell Senior, is facing three of the 16 charges detailed in the indictment: conspiracy to commit racketeering, conspiracy to distribute controlled substances, and possession of a firearm in furtherance of a drug trafficking crime.

Alongside firearms drug, and racketeering charges, prosecutors say the group also created a fake nonprofit so they could receive donations and grants to fund their lifestyle.

According to court documents seen by Insider, the nonprofit was run by member Christopher Erskine and was called D.A.E.M.P.I.R.E. — Determined Adults Exceedingly Motivating Peers Into Responsible Entrepreneurs.

A New York Department of State corporations entity database shows the charity was created in December 2019 in Brooklyn, New York.

Alongside the fraudulent nonprofit, prosecutors say members of the gang also fraudulently obtained benefits from unemployment and "relief programs meant to assist small businesses in response to the COVID-19 pandemic."

"Members and associates of the Enterprise promoted and celebrated, in music and on social media, the criminal conduct of the Enterprise, namely narcotics distribution, acts involving violence, and the use of firearms," prosecutors said in the indictment.

Senior, who records for Jay-Z's Roc Nation, turned himself in to police on Thursday, and all 17 other defendants have already been taken into custody, the US Attorney's Office Southern District of New York said in a statement.

Acting US Attorney Audrey Strauss called the alleged crimes "terrible acts of violence," in the statement.

FBI Assistant Director William F. Sweeney Jr. added: "As the indictment alleges, the violence and drug activity committed by these gang members threatened the safety of our communities and placed innocent lives at risk.  Their unabashed criminal behavior, as alleged, included the murder of a 15 year-old and even extended to defrauding programs meant for people suffering economic hardship due to the pandemic.  But thanks to the partnership and hard work of all law enforcement agencies involved in this investigation, we were able to stop this violent criminal organization – and show that Gorilla Stone is actually not 'untouchable.'"