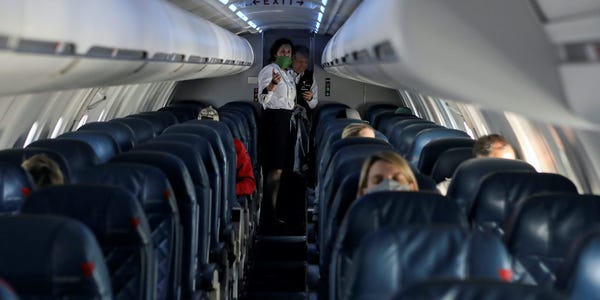 A woman from Garland, Texas, died of COVID-19 in July while waiting for a commercial flight in Arizona to take off, Dallas County Judge Clay Jenkins announced on Sunday.

According to a report from NBC Dallas Fort-Worth, the woman, who has not been publicly identified, had difficulty breathing and was given supplemental oxygen while on the tarmac in Arizona, where she died before the flight took off, according to the report.

As BuzzFeed News noted in its report Monday, it's not clear whether the woman was aware that she had been infected by the coronavirus before she boarded the flight. According to a Sunday news release from Jenkins, the woman who died had "underlying health conditions," which increase the severity of a COVID-19 infection. Information on what those conditions were or how many she had has not been made public.

Jenkins told WFAA, the local ABC affiliate, that officials in Dallas county hadn't been made aware of the woman's death until August, and it only recently had been informed that the woman's death was the result of COVID-19.

According to data analyzed by Johns Hopkins University, there have been more than 850,000 confirmed cases of COVID-19 in Texas, which have resulted in 17,465 deaths in the state.

The airline industry has been particularly hit hard during the ongoing pandemic, as air travel has decreased far below typical numbers. On Sunday, US daily air travel topped 1 million passengers for the first time since March, according to data from the Transportation Security Administration.