Under brilliant sunshine with Flemington’s roses in full bloom and an outsider snatching victory in the Melbourne Cup, the punters who managed to secure one of the 10,000 tickets on offer felt very lucky indeed.

Among them was 100-year-old Richard Waycott, who first went to the Melbourne Cup in 1946 when chestnut stallion Russia won by five lengths. 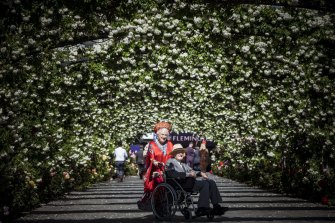 Mr Waycott has lost count of how many times he has been to the Cup since then.

“I was in business for years and years and this was my relaxation,” he said. “I love everything about it, the atmosphere and the horses.”

After the isolation of Melbourne’s lockdowns, Mr Waycott and his wife Jane were determined to attend this year and managed to secure a prime table overlooking the track in the Victoria Racing Club members’ stand.

“It’s fabulous,” he said. “I’ve been locked up in Melbourne and I couldn’t go out, so it’s great to be out today. It’s very special.”

With a range of form guides spread out before him, Mr Waycott explained his strategy was to bet only on the Cup itself. He had backed Incentivise, as he wanted to see trainer Peter Moody win.

However, it was not to be, with the highly backed favourite beaten by Verry Elleegant in a race that had the small but passionate crowd on their feet in the grandstands, cheering the horses down the straight.

It was a very different Cup Day, with attendees strictly segregated into pink, purple and green zones to try to limit the spread of coronavirus in one of the first major events since the end of Melbourne’s sixth lockdown. 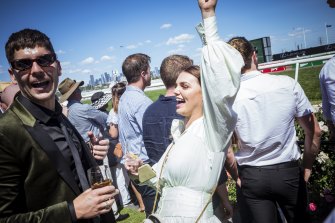 “I put on fifty bucks, so I just won $1000,” Ms Abdoo said after cheering Verry Elleegant home. “Honestly, I just felt very elegant today, so I just went with the name. It’s not a favourites’ day.”

There may not have been the same atmosphere as when 100,000 punters pack the track, but there was plenty of space and small wins such as walking straight into the women’s toilets without any queue.

The bookmakers on track would have liked more punters, with takings down on their usual trade during the busiest week of the year for betting. 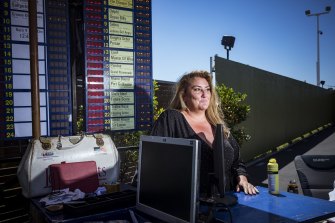 “It’s good to be out, people are happy to be out, but I think the [racing] clubs are finding their feet a bit,” she said. “With COVID we lost 90 per cent of our business because we couldn’t come to the track. Real punters want to come on track and be a part of it all.”

However, Ms Watts was one person happy to see Incentivise lose.

“If [the favourite] gets beaten it’s a great day usually, as most people bet on the favourite and that’s where you hold most of your money if they get knocked over,” she said.

Parents Angelina and Patrick Barbaro were not really focused on the horses, and were instead just relieved to be out of the house and no longer battling through remote learning with their six- and eight-year-old children. 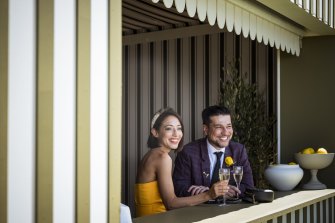 Angelina and Patrick Barbaro enjoy the hospitality in the Wildflower precinct at Flemington. Credit:Chris Hopkins

“I love them dearly, but it’s great to have a day out and have a drink without them,” Ms Barbaro said. “It’s good to get a sense of normality back. Melbourne deserves this.”

The couple were enjoying a glass of champagne in a corporate marquee in the Wildflower precinct while watching the races.

“It’s stunning, it’s amazing. It’s a shame that there can’t be more punters here but other than that it’s pretty phenomenal,” Mr Barbaro said. “I feel we’re very lucky to have it to ourselves.”

Stephen Rodgers, 68, from South Yarra, has been at the Cup for the past 50 years and even watched last year from Scotchman’s Hill when spectators were banned from the track.

He secured one of the 500 tickets available to the general public by logging on early to Ticketek and frantically pressing refresh. The racing and football fanatic said it was an omen for Melbourne that the winning horse’s colours were red and blue, the colours of Melbourne Football Club.

“It was another tough year [for Victoria] losing the grand final for the second year in a row,” he said. “It’s just so lucky, if this had been three or four weeks earlier we might not have been here.”

Get a daily update on the climate summit that will shape our future. Sign up to our Clear Air newsletter here.