The real winners of Loot Island: ALISON BOSHOFF on the TV masterminds behind Love Island and how the show is a magnet for money

Suck in that six-pack and plump up that pout, the most hyped TV show of the summer is back.

Love Island, which started on ITV2 on Monday, has locked 12 more Instagram-perfect attention seekers in a house in Majorca and invited them to ‘couple up’.

Now in its fifth series, the pop culture phenomenon has broken TV ratings records, won a Bafta, and launched the (probably short) careers of a whole new category of ‘stars’. 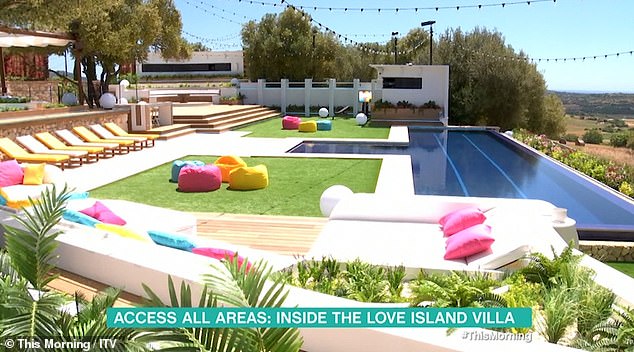 So who are the biggest winners — and losers — on Loot Island? Since 2017, Love Island has been filmed in a villa in Sant Llorenc des Cardassar, Majorca. Its German owner rents it out to ITV every year for two months. It can be rented by private individuals outside of Love Island season for around £4,500 a week

More than that, it has made an awful lot of money. It is about to launch on CBS in America in a deal worth millions to ITV, which has already sold versions of the show to Germany, Australia, Sweden, Norway, Denmark and Finland.

Advertising on the UK version alone is said to be worth around £25 million, while sponsorship revenue brings in another £5 million.

In a bid to counter negative publicity following the suicides of two former contestants, the broadcaster announced improved counselling for islanders and axed some of the more combative elements, such as the so-called lie detectors.

So who are the biggest winners — and losers — on Loot Island?

Presenter Caroline Flack will earn £250,000 for the three-month stint she’ll spend in Majorca hosting the show and is rumoured to have dated Prince Harry

WHERE DOES THE MONEY GO?

Dani Dyer, who won last year, has an endorsement with a clothing line, released a book and secured TV work, including presenting at the Baftas

It flopped and was axed after series two, but returned in 2015, renamed Love Island and aimed at 16 to 34-year-olds.

This time, ITV executive Richard Cowles — also one of the originators of I’m A Celebrity Get Me Out of Here — is responsible for the format. Which makes him one of the biggest earners in entertainment, right?

Wrong! As an ITV staff member, the programme rights belong to his employers. And, as the show’s executive producer and creative director of ITV studios entertainment, he is understood to be on a deal worth around £300,000 a year.

Married with a teenage son, Cowles admitted last year: ‘Sadly I’m on a salary, so I just get the warm feeling of success.’

He added: ‘We didn’t expect series three to be so big. When it launched in 2015 it wasn’t an immediate hit.

‘Production is expensive, it took quite a bit of vision to get people to stay with it — but each year it doubled its ratings. It’s unifying — it’s attracted a young audience in a way people didn’t think was possible any more.’

Last year, it was the most-watched show on any channel at 9pm, and the most followed on Instagram, with 1.7 million followers. ITV doesn’t wholly own the rights. Co-producer Motion Content Group has a chunk and the company is itself owned by ad giant WPP.

The makers won’t say how much the show earns, but according to the last filed accounts for Motion Content Group, the company has a revenue of just over £43 million — much of it generated by Love Island.

A slot during the ITV2 show is thought to cost advertisers more than £100,000, and Love Island’s engagement with young viewers with high disposable incomes makes it an ad man’s dream. Network boss Carolyn McCall said last year: ‘Love Island is a phenomena which has got legs that will be commercially fantastic for ITV.’

Dame Carolyn said the World Cup and Love Island had made ‘outstanding contributions’ to that increase. A TV source suggests the show may earn as much as £25 million in advertising revenue, though ITV sources say that the figure ‘sounds high’. It all rather makes the £50,000 of prize money sound like absolute chicken feed.

A new sponsor is in place this year, and paying more than double what was paid in 2018, reflecting the show’s status as the most popular show with 16 to 34-year-olds.

Uber Eats, the taxi company’s food delivery service, is reportedly shelling out around £5 million to sponsor the show. Previously, Superdrug paid £2.25 million and said the association with Love Island had helped to swell its profits.

This year, bidding started at £3.5 million and was driven up by ‘serious’ offers from nine advertisers. This is the most paid for TV sponsorship for a single programme not run on a flagship channel such as the main ITV and Channel 4 stations. (C4 gets £5 million from Bake Off sponsorship.) 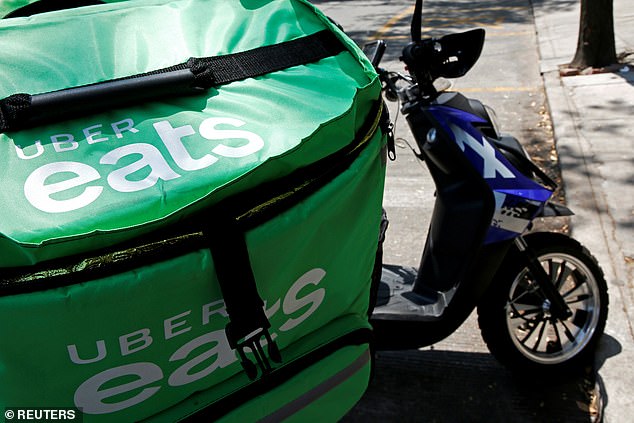 Uber Eats, the taxi company’s food delivery service, is reportedly shelling out around £5 million to sponsor the show. Previously, Superdrug paid £2.25 million and said the association with Love Island had helped to swell its profits

Last year, local versions of Love Island were screened in Australia, Finland, Germany, Hungary, New Zealand and Sweden. They are all showing a second series this year.

Danish and Norwegian broadcasters also picked up the show last year, but are not showing it again this summer.

Not only does ITV get money from selling the format, it also rakes in a production fee as ITV crews end up filming, editing and managing the show, wherever in the world it has been sold.

How much money is involved? To indicate a ballpark figure, sales of the equally successful Top Gear format to countries around the world are said to make around £50 million a year for the BBC.

Love Island crosses the Atlantic this summer to the US, where it will be screened every weeknight on CBS for a month, starting on July 8.

CBS executive Sharon Vuong says: ‘As the buzziest reality show in the UK, Love Island has won the hearts of viewers across the pond as well as around the world, creating appointment viewing and fanfare for audiences everywhere.

‘We are thrilled to bring our version of this cultural phenomenon to CBS. This fun, light-hearted series is like watching your favourite romantic comedy five nights a week.’ 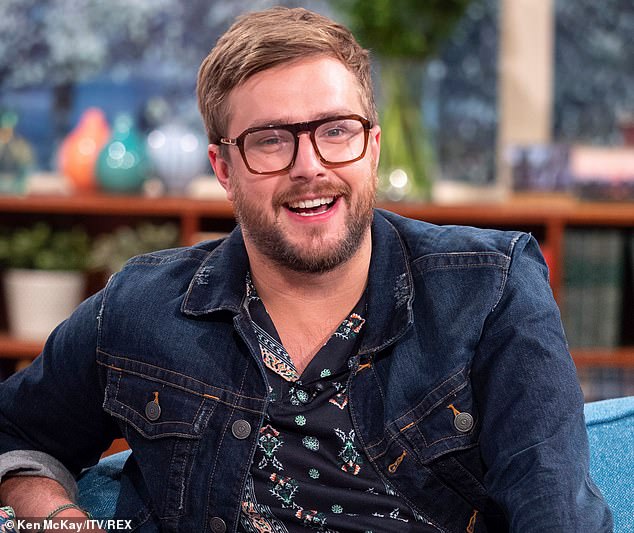 Comedian Iain Stirling’s sardonic observations have become a vital part of the show’s success. A one-time CBBC presenter, he fronted a comedy dating show on ITV2 last year and also released a book called Not Ready To Adult Yet, to cash in on his popularity

Producer David George said: ‘CBS wants a lot of what the UK is doing brought over here with a US sensibility. We are staying pretty true to the format: those are the initial discussions we’ve had and it will be easier for us as we’re not looking at dramatic changes to what’s already gone on.

‘CBS is obviously a mature network and Love Island attracts a particularly young audience, but that’s also one of the big drivers as to why they wanted it. If promoted properly, it will attract a new audience to CBS, and they see this as a big play for the future.’

The show is already becoming popular in America. The last UK series was made available in the US on the streaming platform Hulu this spring.

SOME ISLANDERS HAVE GOT IT MADE

The Islanders are paid £250 a week which, if you figure they are working for the entire period, ends up at around £1.48 an hour — well below the minimum wage.

However, they all know that for a period of probably six months, and possibly more, they have a chance to make big money out of sponsorship deals, Instagram posts and personal appearance fees. Several who appeared in earlier series are reportedly millionaires.

Gabby Allen, a 2017 finalist, reportedly made £1.3 million in a year from Instagram posts and clothing deals, and earned more money by going on Big Brother.

The 2016 runners-up, Alex Bowen and Olivia Buckland, made £3 million. At one point, Alex was said to be making £500,000 a year from appearances at nightclubs.

Gabby Allen (left), a 2017 finalist, reportedly made £1.3 million in a year from Instagram posts and clothing deals, and earned more money by going on Big Brother. Last year, contestant Rosie Williams (right) said she was earning more from Instagram posts and making personal appearances than she had as a solicitor. She said: ‘For me I went from a job that I studied eight years to achieve to doing this. I feel like the legal profession is struggling at the moment. I’ve made my year earnings in a month, let’s just say that, doing this’

Dani Dyer, who won last year, has an endorsement with a clothing line, released a book and secured TV work, including presenting at the Baftas.

Best pals Chris Hughes and Kem Cetinay, who met on the show in 2017 and became something of a double act, have made money from a spin-off show, an appearance in TV programme Hunted and a rap song they wrote.

Last year, contestant Rosie Williams said she was earning more from Instagram posts and making personal appearances than she had as a solicitor.

She said: ‘For me I went from a job that I studied eight years to achieve to doing this. I feel like the legal profession is struggling at the moment. I’ve made my year earnings in a month, let’s just say that, doing this.’

THE NARRATOR’S CASHING IN, TOO

Comedian Iain Stirling’s sardonic observations have become a vital part of the show’s success. A one-time CBBC presenter, he fronted a comedy dating show on ITV2 last year and also released a book called Not Ready To Adult Yet, to cash in on his popularity.

He records the voice-overs in a Portakabin in Majorca after watching footage, and stays with the rest of the crew in a hotel close to the villa. He is believed to earn a six-figure salary.

Love Island is fronted by presenter Caroline Flack, 39, who, ironically, has a rather disastrous relationship record of her own.

She’s best known for dating Harry Styles when she was 32, and he was barely out of school at 17. She’s also said to have dated Prince Harry. Last year, she got engaged to — and broke up with — former Apprentice contestant Andrew Brady and this year ended a fling with rugby star Danny Cipriani.

Having won Strictly in 2014, she landed the Love Island job a year later and is said to be paid £250,000 for the eight-week show. Shortly after presenting the first series, she released her autobiography, Storm In A C Cup.

This year, Flack was unveiled as an ambassador for the cheap and cheerful High Street clothes retailer River Island — a commercial deal said to have netted her £400,000.

The ‘merch’ is melting wallets

Although voting via the app is free, it turns out there are ways to get money directly out of Love Island fans.

In 2017, ITV started selling the ‘Official’ Love Island water bottles — the same design used by the contestants — for £15. 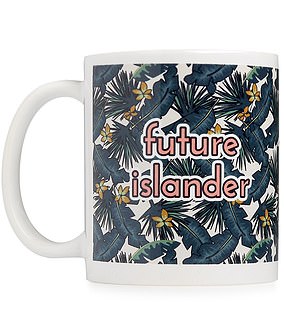 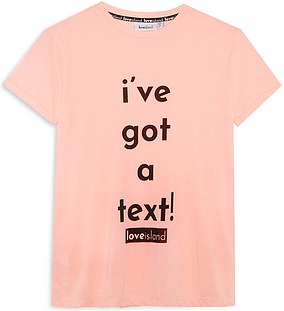 There are also Love Island suitcases at £55 and £80, Love Island phone cases at £10 and £1 Love Island reversible wristbands which read ‘Coupled Up’ on one side and ‘Single’ on the other.

A deal was struck last year with Primark, selling £6 shirts featuring slogans like ‘absolute melt’ and ‘100 per cent my type on paper’.

Many have ended up on eBay for five times that.