The 129 guests evacuated from a Brisbane CBD hotel at the centre of a coronavirus cluster have tested negative, Queensland Premier Annastacia Palaszczuk has revealed.

"That was our high-risk group that we were looking at," she said. 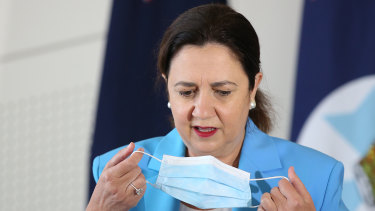 "The 147 people who left since 30 December, the ones that were in Queensland, have all been tested and have tested negative. Once again, good news.

"Of the 226 staff, all have been contacted and some of them have been tested. We are still working through that.

"Out of the 502 in total, the Queenslanders have been contacted and the vast majority are negative."

Queensland police and health officials are investigating how a casual cleaner contracted the highly infectious UK strain of coronavirus while working at the Hotel Grand Chancellor in Brisbane's CBD.

The case triggered a three-day lockdown, of Greater Brisbane, which was lifted at 6pm on Monday, and new restrictions on social gatherings and rules on wearing masks.

There are now six cases in the cluster.

There are now 30 active cases in the state.

"We're not worried about them. Two were acquired overseas and are in hotel quarantine and none of them are from the guests at the Grand Chancellor," Ms Palaszczuk said.

"There is one case that has been reported in Cairns but that is a historical case. We have no concerns about those three today."

How the six cases became infected

December 30: A man who had come to Brisbane from the United Kingdom with the mutant strain tests positive. He then infects his partner who was staying in the same room, on level seven of Hotel Grand Chancellor in Brisbane's CBD.

January 6: A hotel cleaner tests positive for the virus. The 22-year-old had returned a negative test on December 29 but authorities believe she was unknowingly infectious in the community for five days.

January 8-11: Brisbane goes into lockdown. No new cases are detected in the community.

January 11: The cleaner's partner tests positive. He was infectious in the community for two days before he went into isolation on January 7.

January 12: A father and son who had returned from Lebanon test positive to COVID-19 on day 10 of their hotel quarantine stay. They were housed on level seven of the Grand Chancellor.