The Police Federation, which represents British officers, branded the shirts ‘deeply offensive’ and last month asked Amazon to remove them from sale on its site.

Previously on sale for £17.95, the blue shirt shows a white officer striking a pair of arms from above and appears to have been taken down by the individual seller.

Dozens of other merchandise bearing the slogan were on sale, including a T-shirt featuring officers in riot gear manhandling a hooded man. 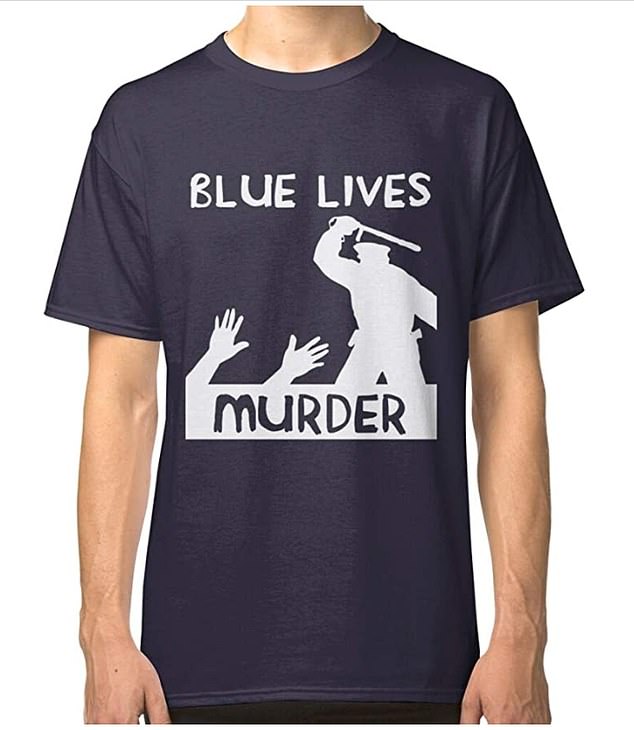 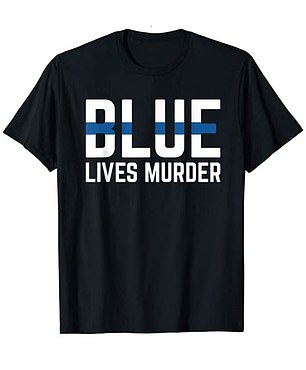 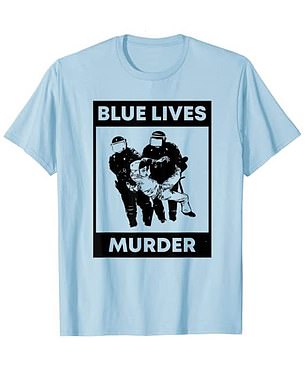 The slogan appeared on dozens of T-shirts on the site, which have now been taken down by individual sellers rather than being banned by the company

Chair of the federation John Apter has now revealed he had a meeting with Amazon UK executives on Monday to try and convince them to stop the sales.

Last month the Police Federation claimed its pleas to stop the sales of the T-shirts was backed by Home Secretary Priti Patel.

But he claims their plea was ‘rejected’ and added: ‘The company maintained the merchandise does not contravene their policies.’

He branded the decision a ‘kick in the teeth’.

Mr Apter said: ‘Together with police colleagues, who have contacted me from across the UK, I consider this merchandise to be highly inflammatory and deeply offensive. 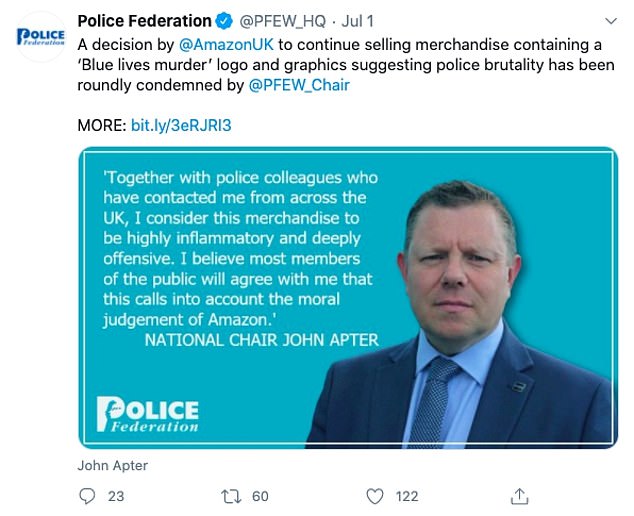 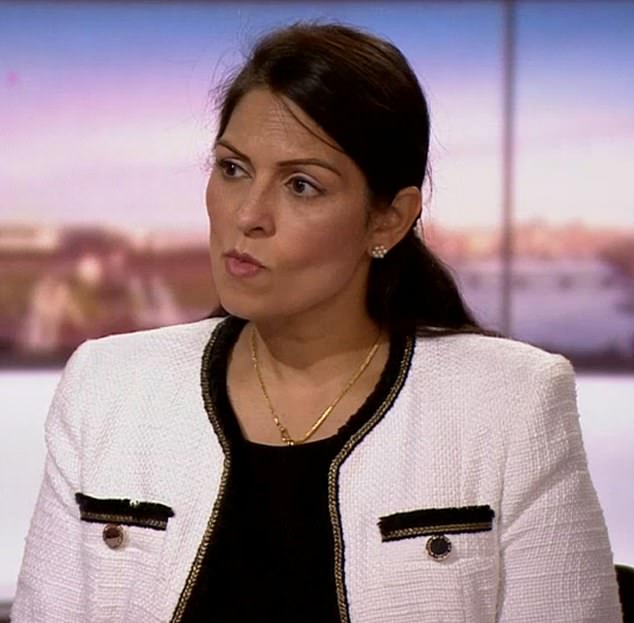 On Twitter the Police Federation said the immediate stopping of the sale of the ‘disgusting’ t-shirts in June was backed by Home Secretary, Priti Patel

‘I believe most members of the public will agree with me that this calls into account the moral judgement of Amazon.

‘I really can’t contain my anger and disgust that Amazon failed to act and refuse to remove the ‘Blue Lives Murder’ merchandise from sale.

‘I met with senior directors from Amazon UK and they did not consider that the sale of these disgraceful items contravenes their policy on offensive and controversial materials.

‘I think this is a bad decision and a wrong decision and smacks of poor judgement. I believe that this is a decision police officers and the public will find hard to understand and stomach.

‘Given recent attacks on my colleagues, this was an opportunity for Amazon to hear the voices of those officers, their families and others who have objected to the sale of these items and to show support for policing during this difficult and dangerous time. 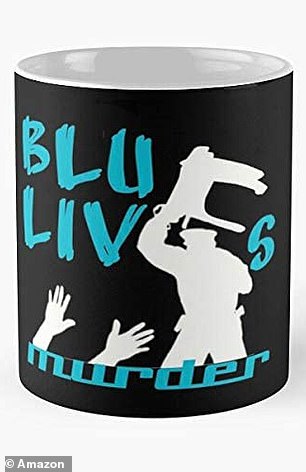 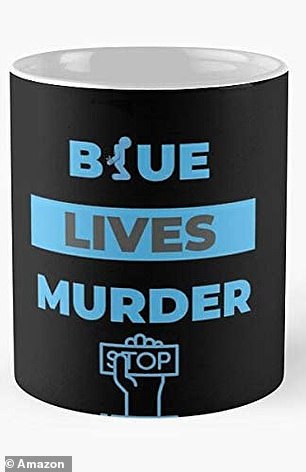 Mugs priced at £12.95 with the ‘Blue Lives Murder’ logo emblazoned on them continue to be sold on the Amazon UK website

‘With policing under so much pressure and being unfairly vilified by some, this is a kick in the teeth.

‘I hope Amazon will urgently reconsider their decision and put right the wrong many of us feel.’

A spokesperson from Amazon UK said: ‘Amazon has strict guidelines in place and follows the local laws of every country we operate in. We also have public policies for third-party sellers, so that they understand the standards we expect of them.

‘We have policies governing offensive and controversial materials which are posted publicly, and we invest significant time and resources to ensure our content guidelines are followed.’ 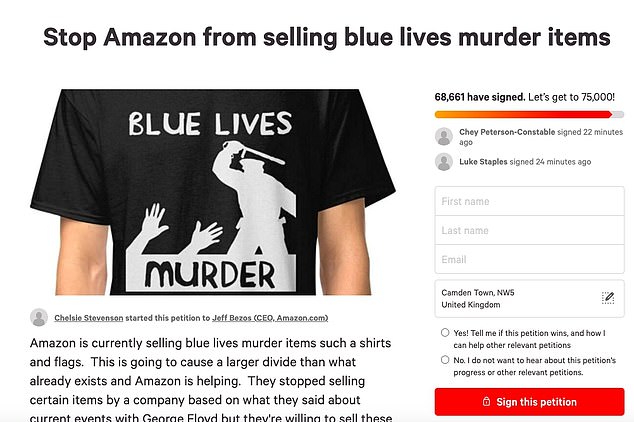 An online petition started by Chelsie Stevenson to remove the items from Amazon has reached more than 68,000 signatures out of its 75,000 goal

While T-shirts emblazoned with the ‘Blue Lives Murder’ logo are not currently available on the Amazon UK website, mugs priced at £12.95 continue to be sold on the site.

Amazon UK refused to comment on whether it removed merchandise from its website or if individual sellers took the decision to remove items when questioned by MailOnline.

An online petition started by Chelsie Stevenson to remove the items from Amazon has reached more than 68,000 signatures out of its 75,000 goal.

Among those to complain was serving police officer Carl Blower, who has been working with Greater Manchester police for 18 years. 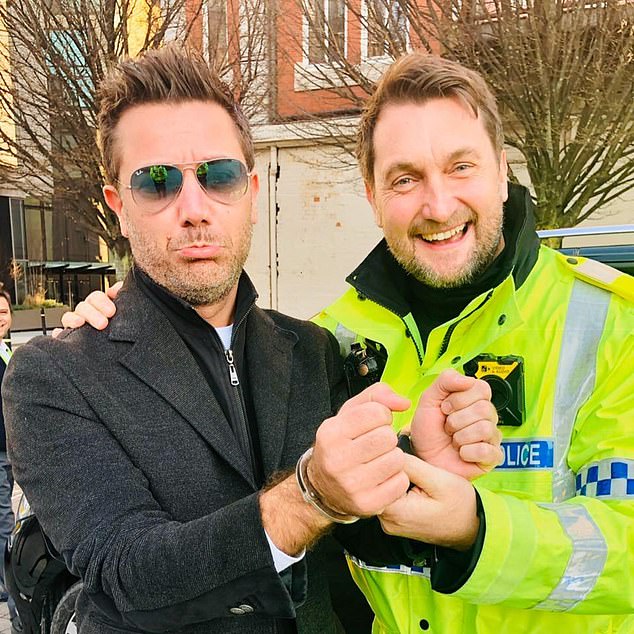 Among those to speak out against the t-shirt was police officer Carl Blower, 50, (pictured right, with Gino D’Acampo) who has been working with Greater Manchester police for 18 years

He took to the retailer’s Facebook page saying: ‘I am appalled and disgusted that Amazon would sell and associate themselves to T-shirts with Blue Lives Murder slogans.

‘You are adding to the cause of what is wrong with the world today. Please ban all these products.’

Facebook user Lesley Michel also posted a picture of the shirt and said: ‘Shame on you Amazon! #Bluelivesmatter’.

Lawrence Hemmings added: ‘Disgusting, I will no longer use Amazon.’

And Kate John said: ‘Still live to buy, how dare you.’