Tides go out, then come back in again, but the boat blocking the Suez Canal still won’t budge.

Monday, however, will bring an unusually high tide, called a “spring” tide, to the canal. It’s expected to push the canal’s water level up as much as 18 inches, which could help dislodge the Ever Given, as The New York Times and other outlets reported.

Tugboats and dredging crews are working to refloat the ship, which has been blocking the canal since Tuesday. They moved it slightly on Saturday. But Monday’s tide will add a little extra room for it to float, which might help move the ship, according to experts.

“The significance of this high water is that it’s higher than at the time of the grounding so in theory it gives you your best shot,” a retired British Navy commander, Tom Sharpe, told The Wall Street Journal. 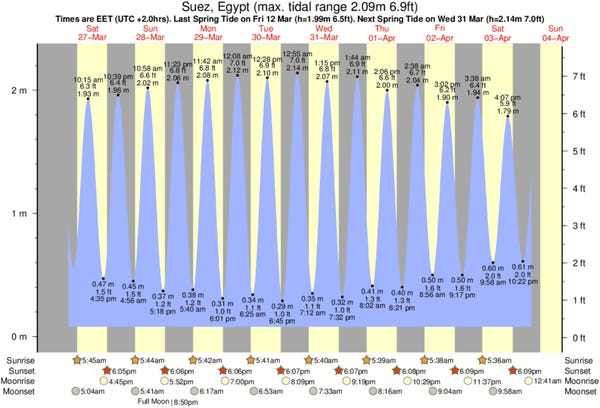 “You have a significant increase in water in there,” Richard Meade, a managing editor of Lloyd’s List Maritime Intelligence told Bloomberg.

Spring tides are also called “king tides,” according to the National Oceanic and Atmospheric Administration (NOAA0. The “spring” is a reference to the “springing forth” of the tide as a new or full moon arrives, according to NOAA. 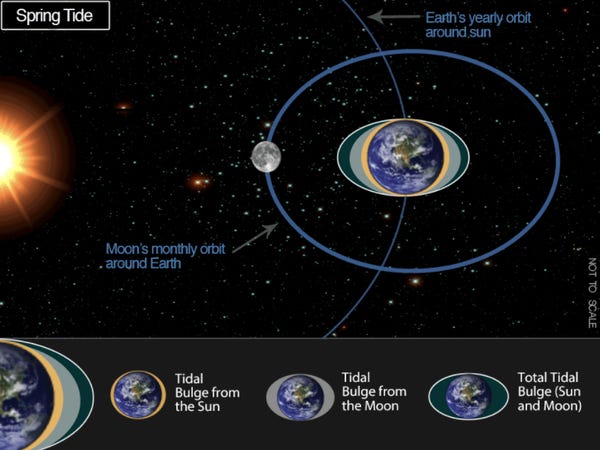 After Monday, when the spring tides peak, the high tides will begin getting lower, according to data from Tide-Forecast. As the tides become lower, it may become more difficult to refloat the Ever Given, although Reuters reported that experts were divided on the subject.

If the ship can’t be moved soon, teams will begin removing some of the containers aboard the ship, attempting to lighten its load, Lt. Gen Osama Rabie, the chairman of the Suez Canal Authority, told reporters on Saturday. That process may take weeks.

“I think the most likely outcome is that it will be refloated on Sunday or Monday. But the worst case (stuck for weeks) is a real possibility,” Clemens Schapeler, of Transporeon, told Reuters.