Animal rights activists have set up a blockade at what they claim is the only UK factory to produce McDonald’s beef burger patties in a bid to persuade the fast food giant to commit to a plant-based menu.

Dozens protestors set up a blockade outside the OSI Food Solutions factory in Scunthorpe last night.

The demonstrators, who have said they will stay ‘as long as it takes’, are using trucks, tents, bamboo structures and a roof occupation to stop the facility from distributing burgers and urge them to switch to a plant-based menu.

Professor Joy Carter, Emeritus Professor of Geochemistry and Health, University of Winchester said: ‘There is no second chance in averting climate breakdown – we have just one opportunity to get this right. 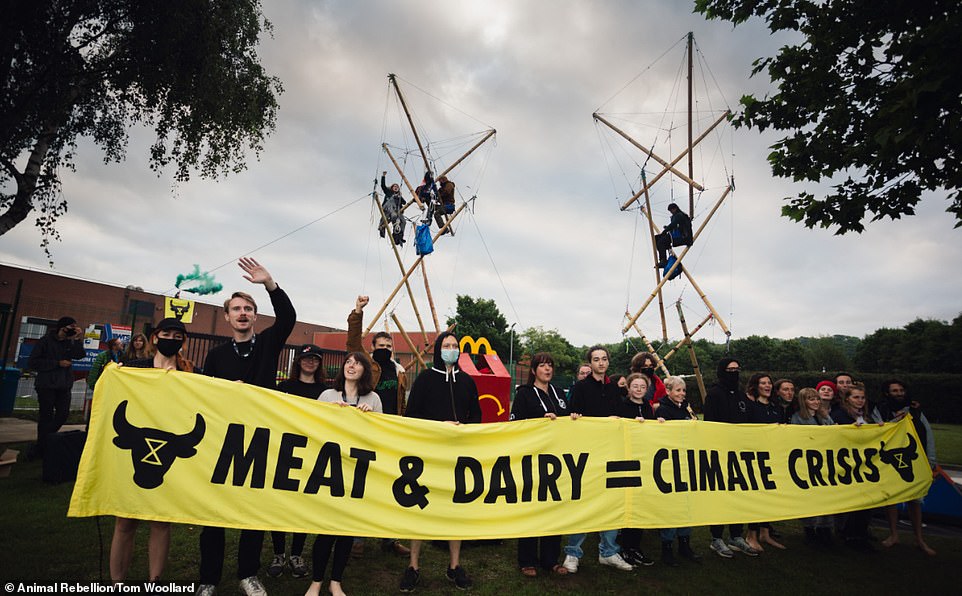 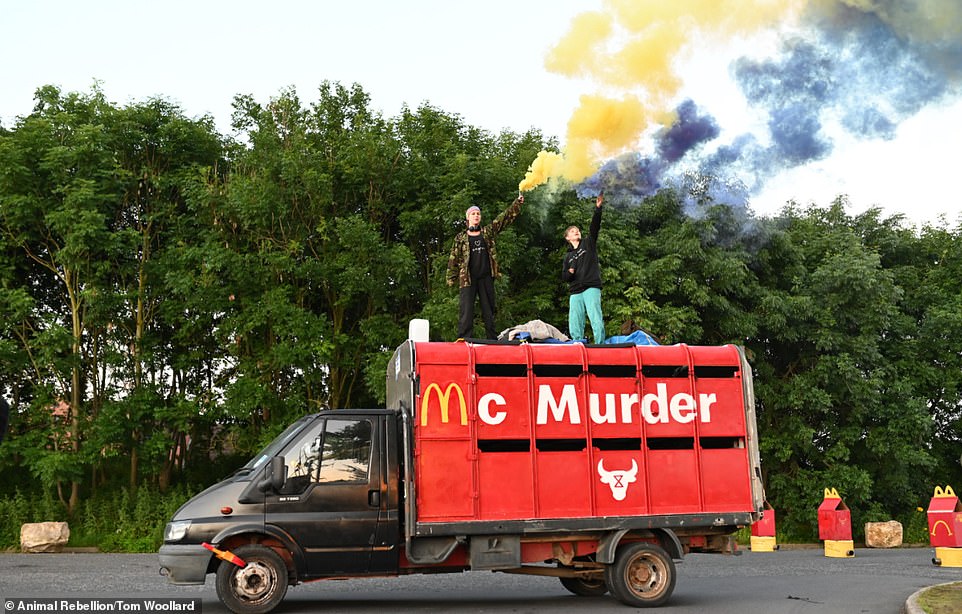 ‘We need to radically change our food system and it must start with the meat and dairy industry. Until we make large-scale systemic changes and move towards a plant-based food system, we will continue to destroy our planet.’

According to an online brochure, OSI Food Solutions UK is ‘the exclusive supplier of red meat products to McDonald’s Restaurants in the UK.’

Animal Rebellion, which claims the factory produces three million burgers a day, is demanding that McDonald’s becomes fully plant-based by 2025.

They have said that they will end the blockade if McDonald’s makes the first step towards this goal by committing to becoming 20 per cent plant-based within 1 year.

Rose Patterson, a spokesperson for Animal Rebellion, said: ‘We’re living in a time where massive change is possible, but our window to act on the climate crisis is closing quickly. 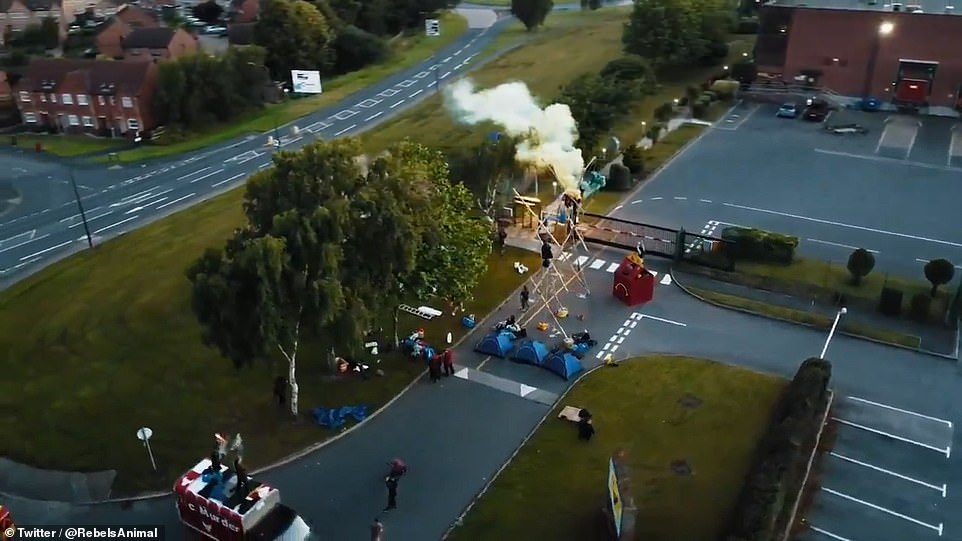 The group have used tents, bamboo barricades and what they call a ‘roof occupation’ as part of their demonstration today 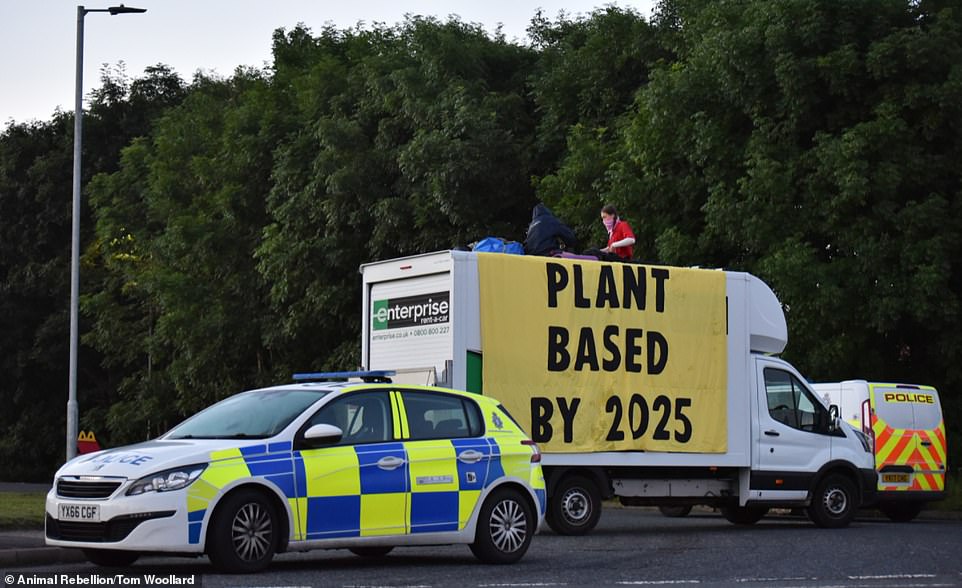 ‘The meat and dairy industries are responsible for 80-90% of Amazon deforestation, at least 18% of global emissions, and for exploiting and killing billions of animals every year.

‘To save ourselves and the future of our children, we must start transitioning towards a plant-based food system.’

The group – which had been planning the blockade for ‘months’ – is an offshoot of Extinction Rebellion, which blocked access to three newspaper printing presses in September last year.

This protest comes after the group shut down four McDonald’s distribution centres two months ago to call out the meat and dairy industries for their role in the climate and ecological emergency causing economic disruption to McDonald’s supply chain.

Up to 100 Animal Rebellion demonstrators blocked the entrances to distribution sites in Hemel Hempstead, Basingstoke, Coventry and Greater Manchester using trucks and shackling themselves to bamboo structures in May this year.

The action resulted in 14 arrests of Animal Rebellion activists and impacted the restaurant chain’s stock levels. 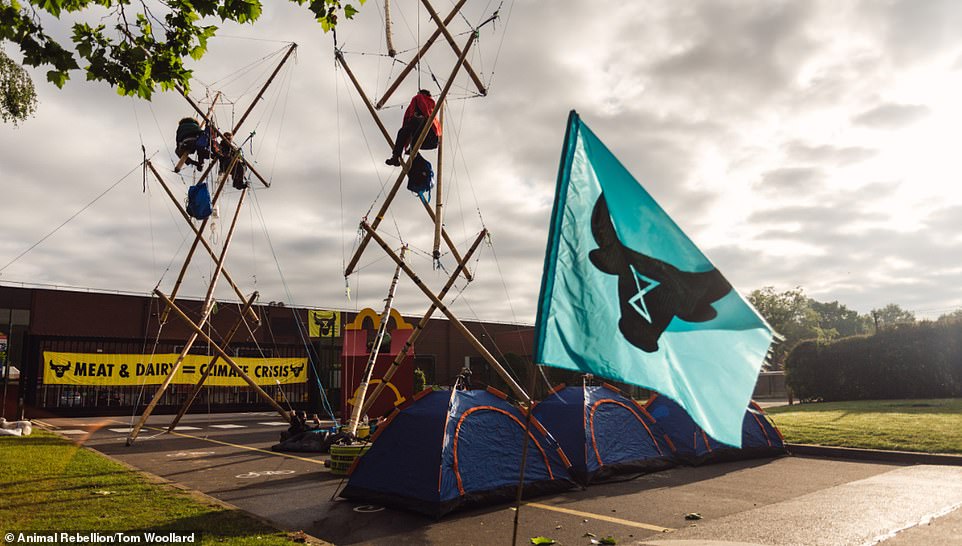 Pictures from the scene show police are in attendance at today’s demonstration and Humberside Police have said they are liaising with all parties involved ‘to address concerns’.

‘Officers are in attendance in order to allow people to go about their lawful business and to protect the right of individuals to take part and exercise their right to peaceful protest.

‘The roads in and around the industrial estate remain unaffected as the demonstration is at the entrance to one premise.

‘We are liaising with representatives from all sides to address concerns. We are committed to fulfilling our duty to protect the human rights of all the groups and individuals with an interest in this situation.’