Apple has won its EU court battle over an order claiming it owes almost £12billion in Irish back taxes, dealing a blow to the bloc’s attempts to crack down on sweetheart tax deals.

The European Commission said Apple benefited from illegal state aid via two Irish tax rulings that artificially reduced its tax burden for over two decades – to as low as 0.005 per cent in 2014.

Dublin appealed against the Commission’s order alongside Apple because it wanted to protect a low tax regime that has attracted 250,000 multinational employers.

The defeat for European Competition Commissioner Margrethe Vestager could weaken or delay pending cases against Ikea and Nike’s deals with the Netherlands, as well as Huhtamaki’s agreement with Luxembourg. 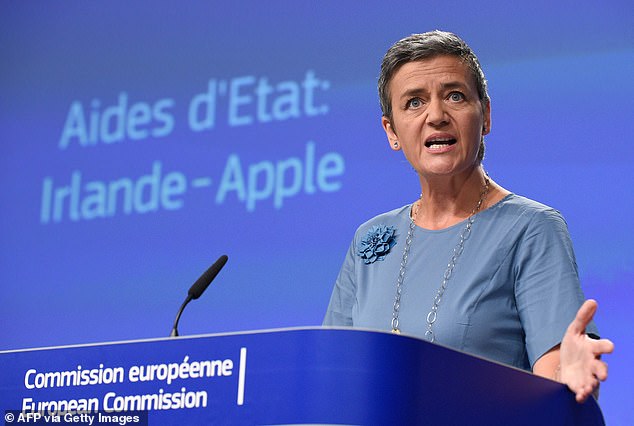 Apple has won its EU court battle over an order asking it to pay almost £12billion in Irish back taxes, dealing a blow to European Competition Commissioner Margrethe Vestager’s (pictured) attempts to crack down on sweetheart tax deals

In its judgment the General Court stated that the commission was ‘wrong’ to declare that Apple Sales International (ASI) and Apple Operations Europe (AOE) had been granted a selective economic advantage and, by extension, state aid.

The court ruled that the commission did not succeed in showing to the ‘requisite legal standard’ that there was an advantage.

In its ruling, it said: ‘The General Court considers that the Commission incorrectly concluded, in its primary line of reasoning, that the Irish tax authorities had granted ASI and AOE an advantage as a result of not having allocated the Apple Group intellectual property licences held by ASI and AOE, and consequently, all of ASI and AOE trading income obtained from the Apple Group’s sales outside North and South America, to their Irish branches.

‘The General Court considers that the Commission did not succeed in demonstrating, in its subsidy line of reasoning, methodological errors in the contested tax rulings which would have led to a reduction in ASI and AOE’s chargeable profits in Ireland.

‘Although the General Court regrets the incomplete and occasionally inconsistent nature of the contested tax rulings, the defects identified by the Commission are not, in themselves, sufficient to prove the existence of an advantage.’

The same court last year overturned Vestager’s demand for Starbucks to pay up to 30 million euros in Dutch back taxes.

In another case, the court also threw out her ruling against a Belgian tax scheme for 39 multinationals. 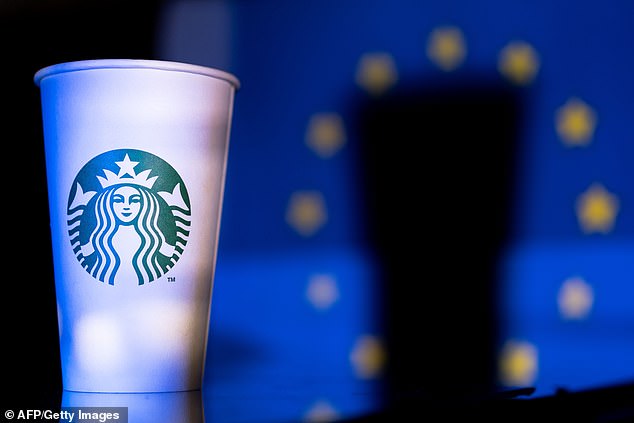 The Commission can appeal against the General Court’s decision to the European Court of Justice. The appeal must be made within the next two months and ten days.

The 13.1 billion euro is being held in an escrow account, meaning the proceeds cannot be released until there has been a final determination in the European courts over the validity of the commission’s decision.

Ireland’s open economy is based on low corporate taxation and other incentives to attract multinationals.

In Apple’s case, it was significantly below the standard 12.5 per cent imposed on corporations.

Apple said that from 2003 to 2014, it paid £457million in tax on profit generated in the country, in line with the tax laws in Ireland.

The Irish Government opposes any effort to force it to change its taxation practices, which have tempted some of the world’s leading financial and technology firms to set up base in Dublin.

In a statement, Ireland’s Department of Finance said it welcomed the judgment: ‘Ireland has always been clear that there was no special treatment provided to the two Apple companies – ASI and AOE.

‘The correct amount of Irish tax was charged taxation in line with normal Irish taxation rules.

‘Ireland appealed the commission decision on the basis that Ireland granted no state aid, and the decision today from the court supports that view.’

The government is set to face fierce criticism for appealing as £12.79 billion (14 billion euros) – including interest – that would have gone a long way to plugging the coronavirus-shaped hole in Ireland’s finances.

The funds could cover at least half of a budget deficit forecast to balloon to as much as 10 per cent of GDP this year.

The defeated side can appeal on points of law to the EU Court of Justice, Europe’s highest court.