A ten-person team of artists have drawn a 4.2-mile-long Black Lives Matter mural made out of tire tracks imprinted in the sand of Nevada’s Black Rock Desert near the site of the Burning Man festival.

The stunning piece of art is getting noticed for its precision as much for its size.

Each of the letters measure 50ft in width and are printed in neat Helvetica font. If the letters were connected and stretched out into a single straight line, it would measure some 25 miles, according to the Reno Gazette Journal.

The mural itself is at the center of a perfectly drawn circle whose circumference measures 13 miles. 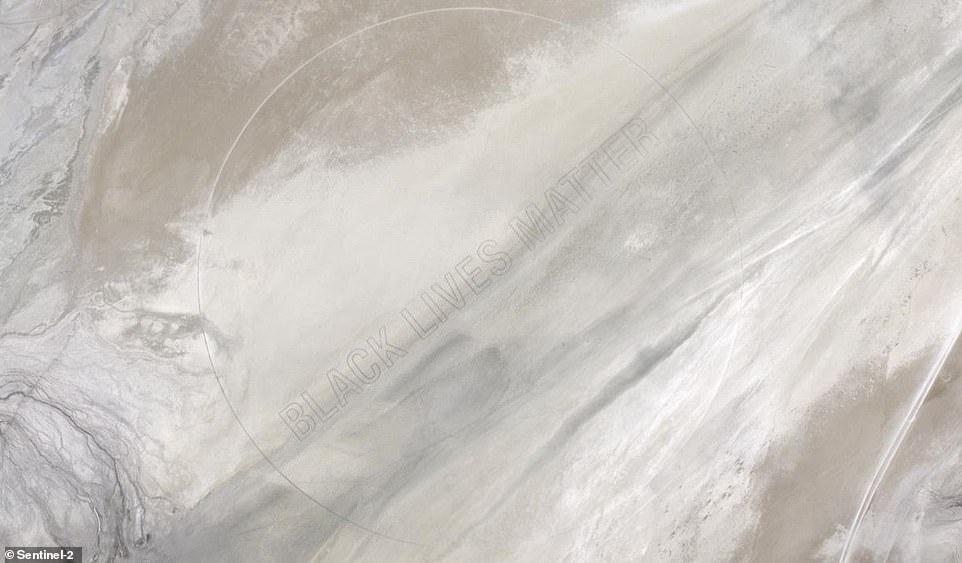 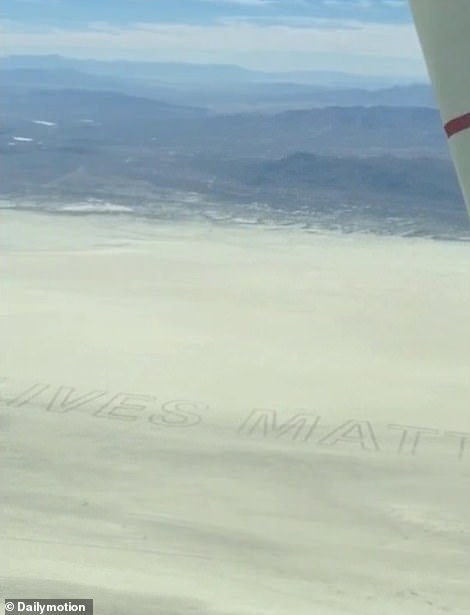 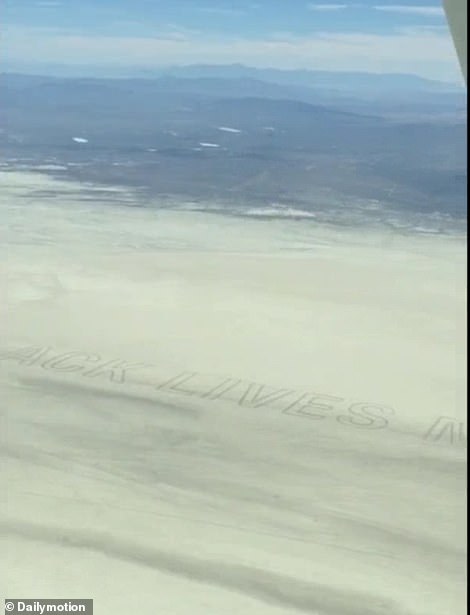 An anonymous group of artists drew the mural over a period of two weeks. They completed the mural on July 3 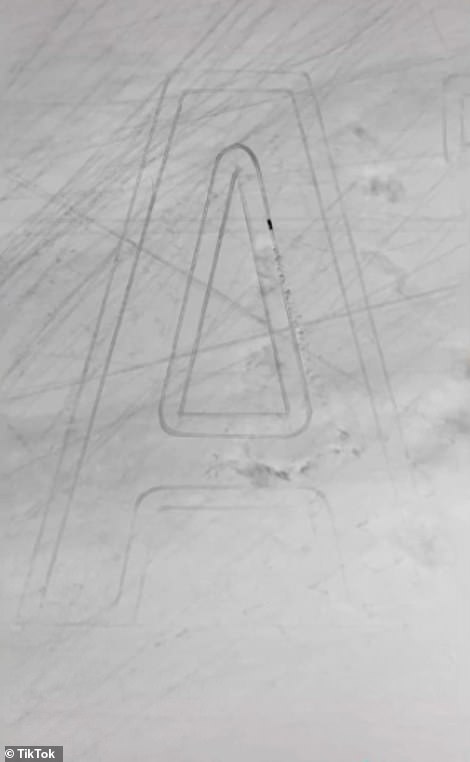 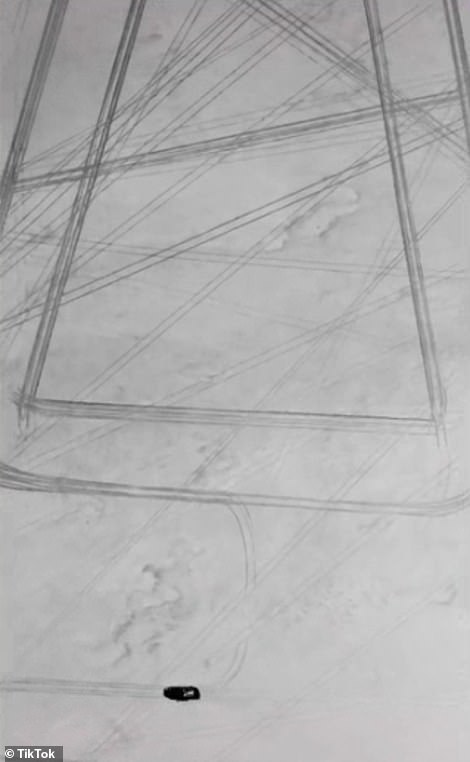 The Bureau of Land Management, the federal agency within the Department of the Interior, believes that the person or people who drew the mural did so with a vehicle in order to imprint the message into the crust of the playa sometime last month.

The precision with which the letters and the circle were drawn also indicates that the authors of the mural must have used GPS technology to get a sense of spacing and location.

‘Someone drove with a GPS and drove several times to make huge, huge letters,’ said Heather O’Hanlon, a Bureau of Land Management spokeswoman.

‘They drove several times so that it stayed imprinted.’ 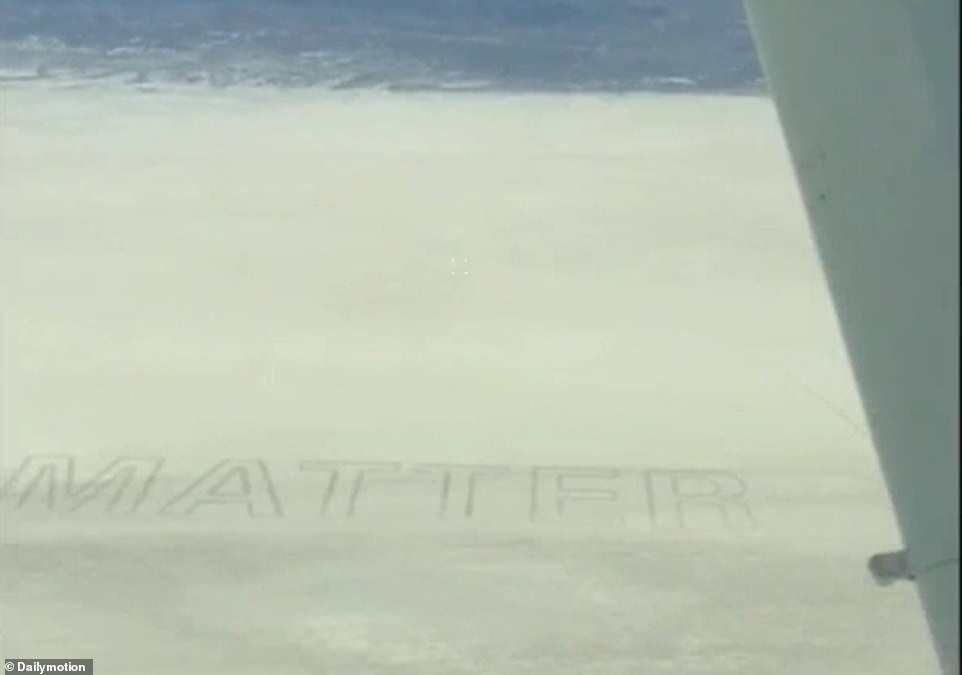 The mural measures 4.2 miles in length with each letter measuring 50ft in width. The mural is seen above from a plane 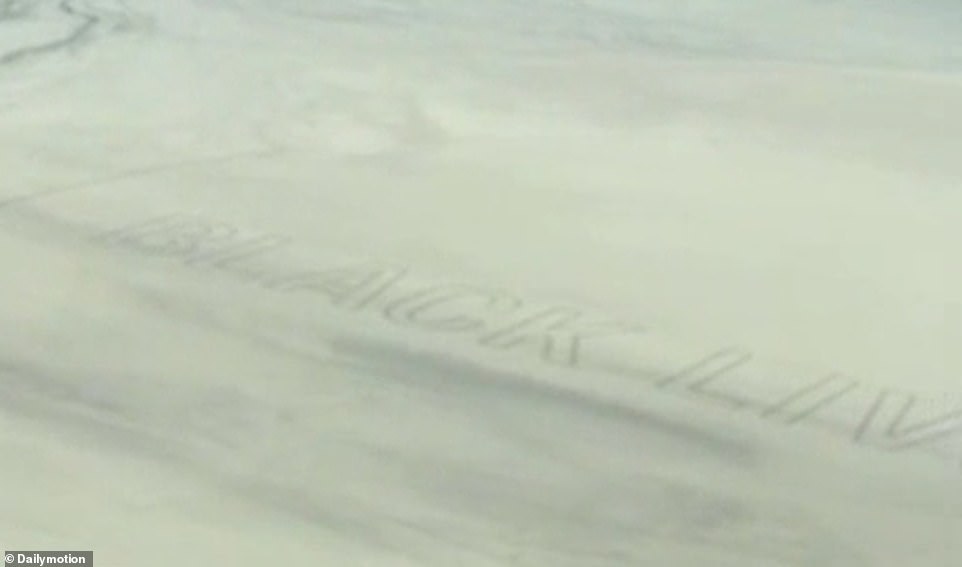 Several videos posted to TikTok by an anonymous artist account titled ‘interdependence day’ show how the mural was created.

In one clip, a pick-up truck is seen driving around to fill out the letters of the mural after it was traced into the ground by someone using a sharp, ax-like object.

The footage appears to have been filmed either from a light aircraft or a drone outfitted with a camera.

The video claims that the mural was completed on July 3.

Anonymous Art Collective said on TikTok that the artists needed seven full tanks of fuel for their pickup truck to complete the mural, which took a total of two weeks.

Fans of the mural have asked the artists to identify themselves so that they can be acknowledged for their work.

‘We released anonymously, we’re not asking for credit,’ the manager of the TikTok account wrote.

Instead, they want the TikTok account to serve as a kind of ‘info hub’ for anyone interested in learning more about the mural. 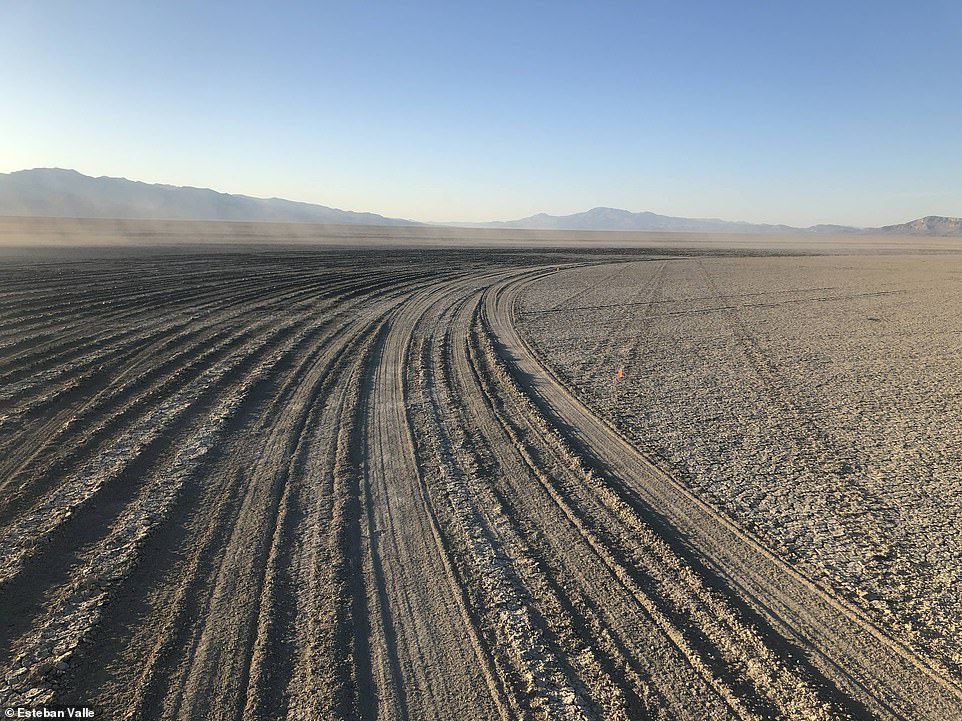 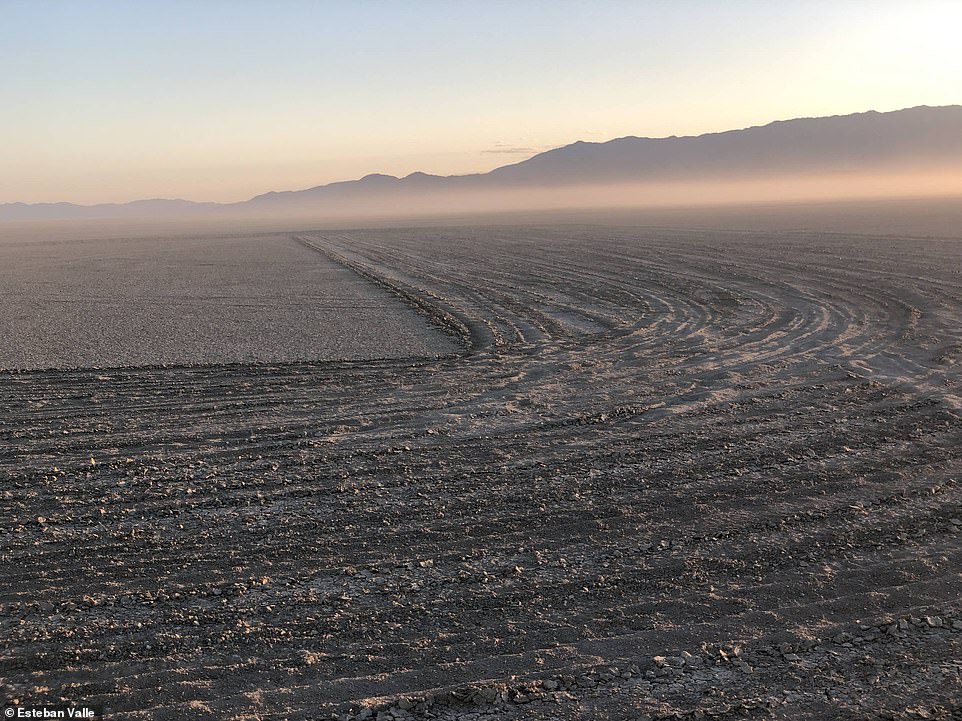 The artists, who chose to remain anonymous, used GPS tracking technology and a small airplane to get precise measurements for the mural

Last month, the mural was captured in a stunning photograph by the Copernicus Sentinel-2 satellite.

Even though the mural was drawn weeks ago, it was only noticed in recent days after pilots flew over the area.

Nick Howard of Petaluma, California, was flying back home from a trip to Idaho when he noticed the mural etched into the Nevada desert.

‘Pure awe,’ said Howard when asked about his reaction to what he saw.

‘How did it get there? It was done so perfectly. It was really impressive how accurate and crisp it was.

‘I tried to figure out how and who, but there still aren’t any answers.

‘You would think that if someone made the effort to make it they’d want some kind of credit.’

While the mural is drawing praise, it is also raising environmental concerns due to the fact that the desert playa in which the letters were drawn is the natural habitat of fair shrimp that lay eggs and live on the surface.

The mural was drawn on top of the Black Rock Desert-High Rock Canyon Emigrant Trails National Conservation Area, a specially designated patch of public land that measures some 1.2 million acres. 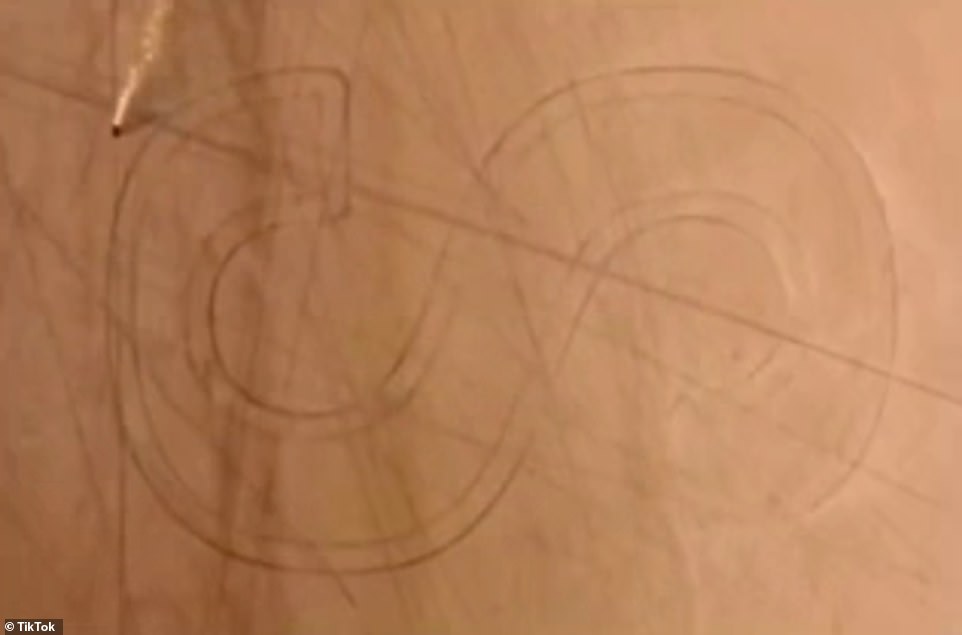 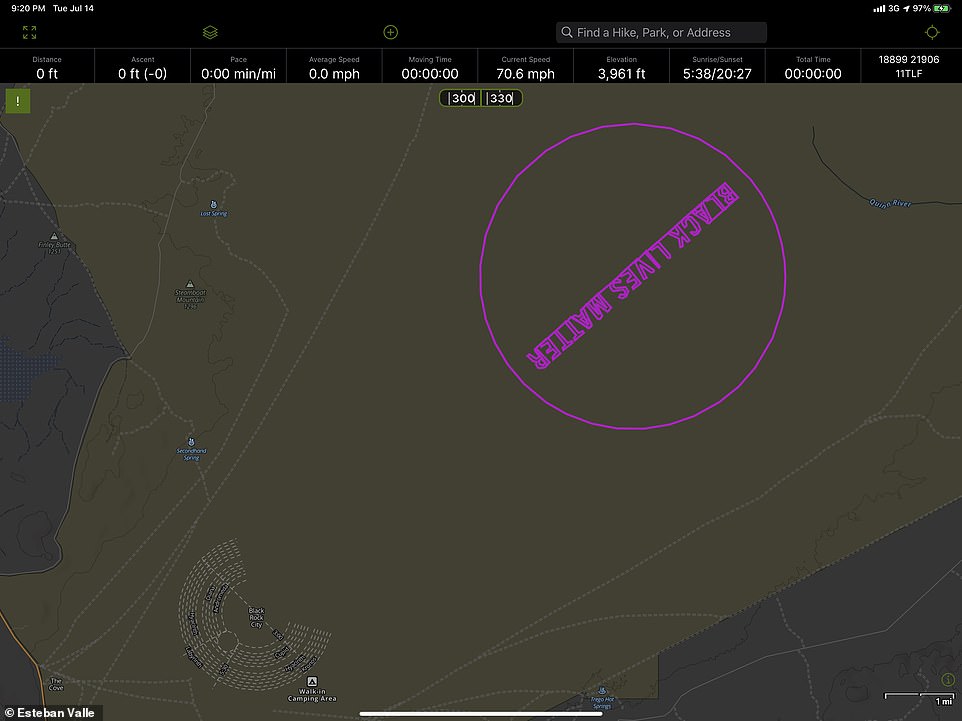 The mural was drawn near the entrance to Black Rock City, site of the annual Burning Man festival

According to its web site, it is the largest national conservation area in the contiguous United States.

Laura Blaylock, an environmental advocate and resident of nearby Gerlach, Nevada, believes that the artists who drew the mural should be cited for vandalism and either made to pay a fine or do community service.

Blaylock told the Reno Gazette Journal that she fears it will lead to others who advocate for certain causes doing a copycat imitation that could potentially do more harm to the environment.

It also goes against the ‘Leave No Trace’ ethos of the Burning Man festival, the annual multi-day arts festival.

‘Obviously somebody made a statement, and it wasn’t us,’ said O’Hanlon.

‘It’s unfortunate it happened on the playa, but mother nature will heal itself. It’s going to be a matter of wind storms and rain storms.’

This year, Burning Man was canceled due to the COVID-19 pandemic. Instead, organizers will have a virtual event online.

While traditionally Burning Man says it is a festival open to anyone and everyone, critics in the past have noted the overwhelming number of white participants and the few people of color who attend.

The festival organizers did release a statement expressing support for the Black Lives Matter movement.

‘Let’s amplify voices and ideas that will lead us to a more equitable society.

‘Let’s create the space to listen and have the conversations needed to make permanent positive change in this world.

‘Burners have always been doers, so let’s do this.