One of Joe Biden’s most ambitious attempts to tackle COVID-19 could soon be thwarted by America’s highest court, adding to the US President’s woes ahead of this year’s midterm election.

As coronavirus infections reached new records this week, a White House push for large employers and health facilities to force staff to get vaccinated became the subject of a fiercely contested legal challenge in the Supreme Court on Friday (AEDT Saturday). 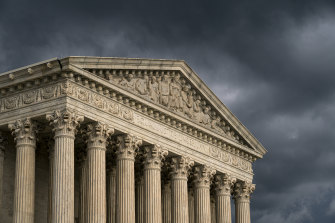 The US Supreme Court in Washington DC.Credit:AP

The vaccination mandate, which could impact more than 100 million workers, formed part of a plan announced in September as the Delta strain of coronavirus ravaged the US, months before Omicron became the nation’s most dominant variant.

Biden directed the federal Occupational Safety and Health Administration to order employers to implement a vaccination mandate for every business with 100 or more employees. Mandates were also issued for healthcare personnel that receive federal Medicaid and Medicare funds.

The changes were due to take effect next month. However, opponents of the policy – which include large and small businesses, numerous Republican states and some individuals – describe it as a government “overreach” that could result in many people losing their jobs due to being unvaccinated. 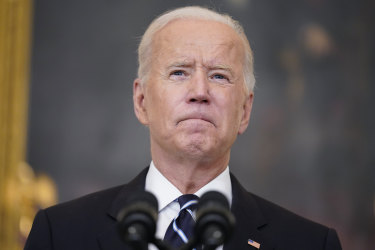 “The short version is, as soon as businesses have to put out their plans, and this take effect, then workers will quit – and that will ripple through the national economy,” lawyer Scott Keller told the Supreme Court today.

Outside court, state-based Republicans also argued that individual liberty was on the line.

“The key is: can the federal government force you into a medical procedure? Because that’s what’s at stake,” Louisiana Attorney General Jeff Landry told Fox News.

“If that is the case, then we are no longer sovereign individuals – we’re basically serfs of the federal government. If that’s where we end up, then we’re on a very, very slippery slope.”

After almost four hours of arguments from both sides of the debate, the Supreme Court appeared to be split on the issue, setting the scene for a potentially explosive decision in a politically charged election year.

Conservative judges – who make up the majority of the nine-member US Supreme Court – questioned whether the Biden administration had the legal authority to force workers from large companies to get inoculated, but appeared to be open to the idea of mandating vaccines for federal health workers.

The court’s liberal justices, the other hand, focused much of their attention on America’s soaring coronavirus rates, and questioned the plaintiffs on why they were seeking to block a policy designed to mitigate the virus. 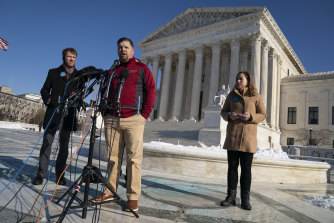 Brandon Trosclair, a grocery store owner that is challenging the Biden administrations vaccine mandate, talks to reporters outside the Supreme Court.Credit:AP

“Hospitals are full to overflowing. People all over the world are getting this and they’re dying – or they’re filling up hospital beds and others are dying because they can’t get a bed,” said Justice Stephen Breyer, while questioning Keller.

“So it seems to me that every minute these things are not in effect, thousands of more people are getting this disease… I would find it unbelievable that it could be in the public interest to suddenly stop these vaccinations.”

The hearing came as the US averages more than 500,000 new cases of coronavirus a day – far more than at any previous point in the pandemic.

While the Omicron variant appears to cause less severe illness than other strains, it has nonetheless contributed to increases in hospitalisations across the country, which have increased more than 50 percent over the last two weeks.

The Supreme Court has expedited the legal challenge due to the sharp rise in cases, and a decision could be handed down as early as next week.

But even a partial pushback could be politically damaging for Biden, who came to office promising to “shut down” the virus – in part through the use of federal vaccine mandates.

Economists have also raised concerns that the latest surge in cases could halt job growth in the coming months, which would add to the Democrats’ uphill battle to retain control of Congress at November’s midterm election.

The latest labour figures released today didn’t paint an entirely rosy picture for the Biden administration. While the unemployment rate has dipped to 3.9 per cent, the economy only added 199,000 jobs in December – down from 249,000 in November.

Biden nonetheless was optimistic about the data, noting that the one-year decline in the unemployment rate was the sharpest ever. “I think it’s a historic day for our economic recovery,” he said.