We have made our live coverage of the coronavirus pandemic free for all readers. Please consider supporting our journalism with a subscription.

Eleven more NSW schools have been forced to temporarily close after people in their respective school communities tested positive to COVID-19.

The schools – of which eight are located in regional NSW – will be shut for at least 24 hours to allow for contact tracing and cleaning.

“All staff and students are asked to self-isolate and follow the NSW Health advice and protocols,” the Education Department said in a statement.

The closures come as NSW today lifts travel restrictions for the fully vaccinated between Sydney and regional areas, and ends quarantine requirements for international arrivals.

The following schools will be shut today:

The first of 16 quarantine-free international flights have touched down in Sydney this morning.

The first flight was from Singapore, while the second flight, which landed just after 6am, was a Qantas flight from Los Angeles.

Melbourne’s first regular, inbound international flight is due to touch down shortly before 11am.

From today, fully vaccinated Australians are able to travel overseas without first obtaining a travel exemption.

Australia closed its borders to non-residents and non-citizens in March 2020 and since that time has only been allowing a limited number of exemptions and repatriation flights, but with mandatory hotel quarantine.

Sydney and Melbourne now allow the fully vaccinated to skip hotel quarantine due to high vaccination rates in their respective states.

Leaders from the world’s biggest economies have fractured in a tense negotiation over climate change that has stalled hopes for a global pact to make deeper cuts to carbon emissions and phase out the use of coal.

The G20 leaders scaled back plans by some of the group’s most powerful members, including the United States and European Union, for an ambitious agreement that would set a collective goal to reduce emissions to net zero by 2050. 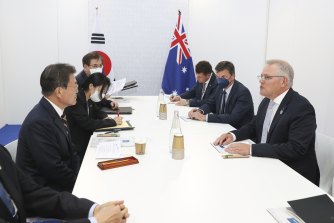 A UN proposal to phase out coal was strongly opposed by Australia, China, India, Russia and other nations. Credit: Alex Ellinghausen

While the group backed the goal of limiting the rise in world temperatures, it made no firm commitments on how to keep the rise to 1.5 degrees Celsius after warnings from scientists two months ago on the need to reach that goal.

Australia was strongly opposed to phasing out coal, and was also opposed to a call to reduce methane emissions by 2030.

United Nations Secretary General Antonio Guterres admitted the failure for leaders to agree on climate change at the summit in Rome, but held out hope of a commitment from a wider group of leaders when they meet at the COP26 climate summit in Glasgow.

French President Emmanuel Macron says Scott Morrison lied to him over the cancellation of a mammoth submarine contract, in a dramatic escalation of tensions between the two leaders.

Asked by The Sydney Morning Herald and The Age at the G20 summit in Rome whether he could trust Morrison again, Macron replied: “We will see what he will deliver. 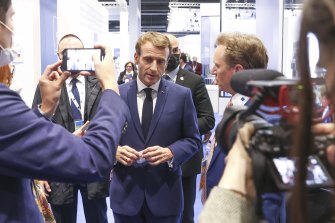 French President Emmanuel Macron at the G20 in Rome.Credit:Alex Ellinghausen

When also asked whether Morrison lied, Macron said: “I don’t think, I know.”

Morrison and Macron had the day before shook hands briefly, but Macron’s anger on the closing day of the Rome summit suggests the rift caused by Australia’s cancellation of a multi-billion dollar submarine contract will be long-lasting.

The Queensland Premier’s deadline for unvaccinated residents to be fully protected before infected interstate travellers pour across the border has expired, with the state still shy of the 80 per cent first-dose milestone.

Today also marks a significant changing of the guard as Dr Jeannette Young officially steps down as leader of the state’s pandemic response and is sworn in as the 27th Governor of Queensland. 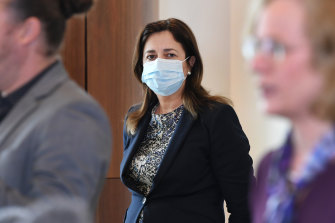 According to Premier Annastacia Palaszczuk, unvaccinated Queenslanders are now out of time to get protected before the border restrictions ease on December 17.Credit:Getty

Yesterday, the total number of Queensland residents aged 16 and older who had received one vaccine dose stood at 77.3 per cent, while 63.5 per cent were fully vaccinated.

Premier Annastacia Palaszczuk set Sunday as the deadline for Queenslanders to get their first jab if they wanted to ensure they were fully protected when the border restrictions ease on December 17.

Read more about the situation in Queensland here.

Good morning and thanks for your company.

It’s Monday, November 1. I’m Broede Carmody and I’ll be anchoring our live coverage for the first half of the day.

Here’s everything you need to know before we get started.