British Airways passengers could face a summer of travel chaos as airline axes 16,000 flights and staff threaten to strike over their pay

The prospect of summer travel chaos intensified yesterday with the news that British Airways is cancelling 16,000 flights – and staff are threatening to strike over pay.

BA announced that flights on several popular routes are being slashed until October as it continues to struggle with staff shortages.

Chief executive Sean Doyle said an average of 60 flights daily – 16,000 in total – will have been axed between March and the autumn – about 10 per cent of all BA flights. 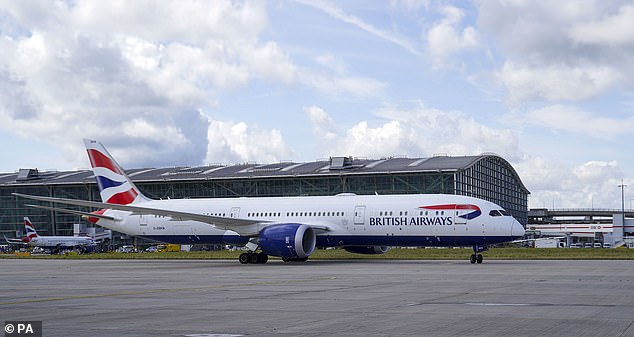 Around 75 per cent of those are short-haul flights to EU hotspots including Spain and Italy.

…but if you’re stuck here, at least it’s hot!

Britain will enjoy a balmy weekend after temperatures yesterday rivalled those of Barcelona, Athens and Istanbul.

Over the weekend, temperatures will stay in the low-20s with cloud and drizzle forecast for northern and western areas before conditions improve again towards the end of the week.

Richard Miles, from the Met Office, said that the current high temperatures have been ‘particularly surprising’ for so early in the month.

The Mail can also reveal that hundreds of BA check-in staff based at Heathrow Airport, where the carrier mostly operates from, are voting on whether to strike.

They took a 10 per cent pay cut during the pandemic and are demanding their full salaries are reinstated amid cost-of-living pressures and passenger numbers surging again after the pandemic.

Nadine Houghton, of trade union GMB, said it is ‘no wonder’ workers are considering industrial action. Both GMB and Unite unions were testing members’ appetite for strikes yesterday and union chiefs are poised to hold a formal, legally binding vote giving a mandate for a walkout if pay demands are not met. Strikes could begin by July and continue into August.

BA said the majority of staff accepted a ‘generous’ one-off lump sum equivalent to 10 per cent of their salary. But check-in staff rejected this because it meant taking a long-term pay cut.

BA has already cancelled thousands of flights in recent months due to staff shortages and an IT meltdown, and critics say it cut too many staff during the pandemic. Mr Doyle said the airline had had ‘significant losses over the last two years’ but ‘I think when you look at what we had to go through, the decisions made at the time were appropriate’.

BA’s owner International Airlines Group said ‘the problems we are having at BA we can see in other airlines’.

Budget carrier easyJet has also cancelled hundreds of flights in recent weeks, but the likes of Virgin Atlantic, Ryanair, Jet2 and TUI have not.