Caught on camera: Brazen bag thief who targeted City workers enjoying a drink after work is jailed for 15 months

A bag thief who targeted London city workers enjoying a drink after work has been jailed.

After he was jailed for 15 months, detectives warned people to keep an eye on their bags in the run-up to Christmas. 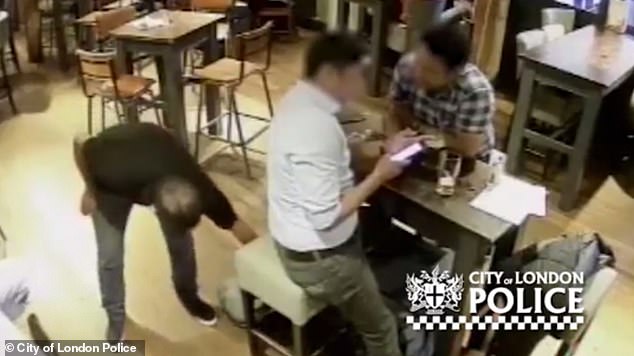 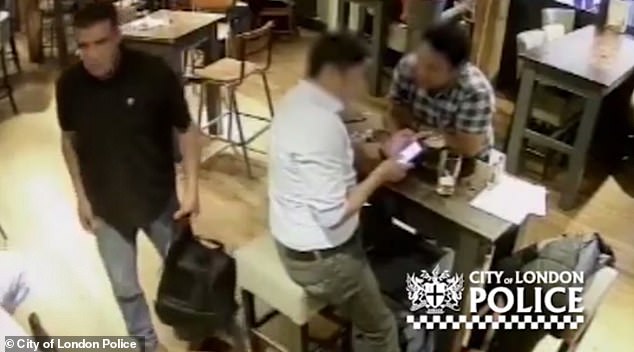 Ismail Lakehal, 45, is then seen walking off with the rucksack in his hand as the two men don’t seem to notice anything

He managed to snatch five backpacks from male victims who were all out after work, having drinks with friends.

Lakehal, of no fixed address, targeted customers at the ‘Rack and Tenter’ bar in Moorgate, in the City of London, during the summer.

His first crime took place on June 25 before striking another four times over the following three weeks.

At sentencing, Judge Jeremy Donne RD QC said his crimes were serious ‘due to the loss and inconvenience suffered by the victims’.

PC Kevin Bassant, from the City of London Police, said: ‘Putting Lakehal behind bars will reduce some of the theft occurring in the City’s licensed premises.

‘However, we have seen a rise in these types of offences recently and expect this trend to continue as pubs, bars and restaurants get busier over the Christmas period.

‘It’s important people keep an eye on their belongings when they are out and about and are aware of their surroundings, especially after work when they might have high value items such as laptops and tablets.

‘It can be easy to think your belongings are safe under a table or chair, but in reality, a busy pub or bar is the perfect environment for thieves to go unnoticed – so keep your bags within reach.’