Labour ‘neutral on Brexit’ meltdown: Andrew Marr ridicules Jeremy Corbyn’s claim he will not campaign for his own deal in second referendum – as John McDonnell insists HE won’t sit on the fence and favours Remain

Jeremy Corbyn’s allies were today desperately struggling to defend his vow to stay ‘neutral’ on Brexit.

Shadow education secretary Angela Rayner was left floundering as she was roasted on the policy by the BBC’s Andrew Marr this morning.

She said it was a ‘hypothetical’ question whether a Labour government would support its own new package.

Meanwhile, shadow chancellor John McDonnell added to the confusion by insisting he will not sit on the fence in the mooted ballot, and is likely to oppose any form of Brexit.

Mr Corbyn caused fury last week by admitting that while he wants to negotiate a new Brexit deal and call a second referendum, he will never tell the British people whether he backs Leave or Remain.

Interviewing Ms Rayner today, Marr demanded to know who would lead the campaign for Labour’s new deal if not the party’s leader.

He also accused Labour of ‘dishonestly’ claiming that only the top 5 per cent would pay for its huge spending splurge – saying basic rate taxpayers faced losing marriage tax allowance. 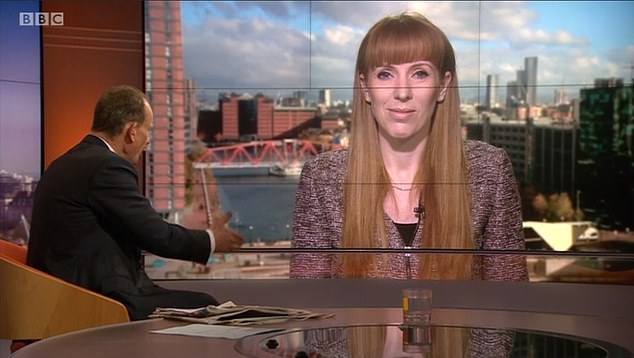 Interviewing Angela Rayner today, Andrew Marr demanded to know who would lead the campaign for Labour’s new deal if not Jeremy Corbyn 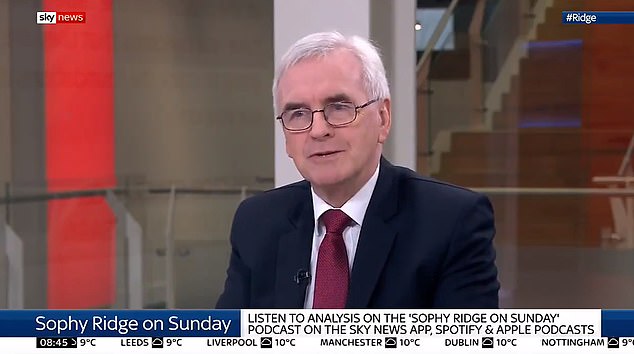 Shadow chancellor John McDonnell added to the general confusion today by insisting he will not sit on the fence in the mooted ballot, and is likely to oppose any form of Brexit

In bruising exchanges as the election campaign enters its final stretch, Marr pointed out that many shadow cabinet members had already publicly said they will campaign for Remain in a second referendum.

‘You negotiate this new deal, you bring it back, the PM is neutral, most of the senior members of the Cabinet are in favour of Remain… what we know about the party is pro-Remain,’ he said.

‘This is going to be the most unloved orphan offer to the British people ever.

‘It is going to be a referendum between staying inside the EU, and an offer no-one seems to be standing up for..

Ms Rayner smiled awkwardly as the question was put to her.

‘The framing of this is that everybody is Remain and that’s just not true,’ she said.

‘The country did vote to leave the EU and we have said we respected that… we will negotiate a deal and we will put that back to the people. They will have the ultimate say and then we will move on.’

Ms Rayner was asked if a future Labour government would take a position on the deal it would negotiate with Brussels or not.

‘Well, that’s a hypothetical,’ she said.

Mr McDonnell has said he will not remain neutral in any second EU referendum.

He told Sky News’s Sophy Ridge on Sunday individual members of the party and the shadow cabinet will be able to campaign on the basis of their judgment.

Labour, he said, would ‘negotiate a sensible deal, put that back to the British people alongside Remain and people will have to make a judgment around that deal as against remain’. 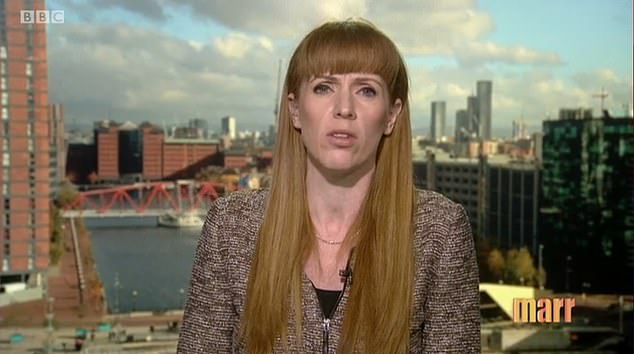 Asked whether he would stay neutral, he said: ‘No, I won’t and I don’t think Jeremy’s asking people to do that.

‘I’ll wait until I see the details of the deal that we negotiate. I’ve said up until now – I was in the negotiations with the Conservatives for six weeks and I couldn’t see a deal even emerging then that could beat remain, but let’s see what we can negotiate.’

Marr also grilled Ms Rayner on the pledge to scrap the marriage tax allowance. The Tory policy allows non-earners to hand £1,250 of their tax-free allowance to their spouse – but can only be claimed by basic rate taxpayers.

‘Are those people in the top 5 per cent?’ Marr said.

Ms Rayner said Labour had been ‘incredibly honest with the public’ that in order to improve the country the wealthiest would have to pay more.

But Marr insisted: ‘I’m really sorry Angela Rayner but you are not being honest with the public when you say that only the top 5 per cent are going to have to pay.

‘Everybody taking marriage tax allowance are going to lose that under Labour. They are not in the top 5 per cent. They are relatively low and medium tax payers and you are taking £250 away from them.’