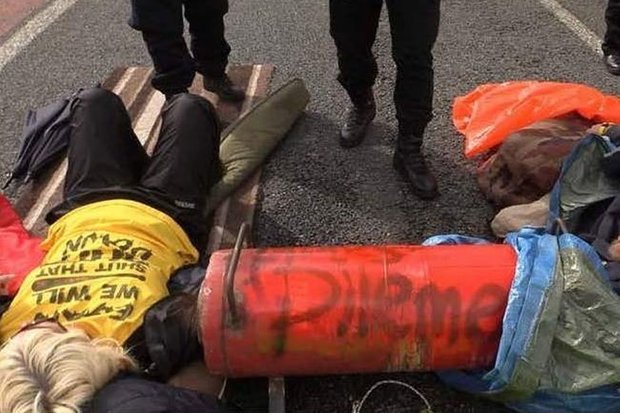 Police had to use angle grinders to free Catherine Jackson, 51, after she attached herself to the gear in a “physically demanding” protest, a court heard.

She pocketed nearly £5,400 in disability handouts claiming to be in so much pain she could “barely stand up” and slept most of the day due to her medication.

Jackson claimed an arthritic shoulder meant she could not hold anything or cook for herself.

She also said she suffered such severe anxiety and depression she could not leave home without suffering a panic attack. But she was pictured taking part in an anti-fracking demo at Little Plumpton, Lancs.

She claimed the protest was good for her mental health.

But prosecutors found her argument was “not convincing” and she was given a 23-week prison sentence suspended for two years.

She was also ordered to obey a 7pm to 7am home curfew for three months by JPs in Blackpool after admitting failing to notify benefit bosses of a change in her circumstances.

Justine McVitie, of the Crown Prosecution Service’s fraud unit, said: “It was clear to the CPS that Ms Jackson was dishonestly claiming this money and was not nearly as incapacitated as she claimed”.