Gettysburg: Joe Biden has made an impassioned plea for national unity and bipartisan co-operation in a speech casting the 2020 election as a "battle for the soul of the nation," with the Civil War's most famous battlefield as his backdrop.

"There's no more fitting place than here today in Gettysburg to talk about the cost of division, about how much it has cost America in the past, about how much it is costing us now, and why I believe in this moment we must come together," Biden said to a small, socially distanced crowd. "Today, once again, we are a house divided, but that, my friends, can no longer be. We are facing too many crises. We have too much work to do. We have too bright a future." 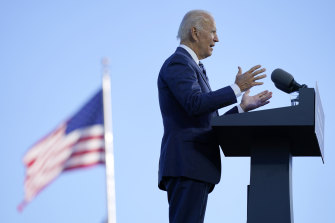 In the speech, Biden sought to place himself above the fray, spending more time discussing universal American values than levelling attacks on President Donald Trump. He layered a presidential tone over his Scranton-bred everyman persona.

With only a handful of attendees aside from members of the news media, security personnel, and campaign staff, Biden's speech was delivered primarily for a television audience. Among the few guests invited were local military veterans.

He spoke from a vista overlooking the Civil War's bloodiest battlefield, where the Union Army won a pivotal victory over Confederate soldiers and President Abraham Lincoln delivered his historic Gettysburg Address affirming that all people are created equal.

Biden's bid to be seen as a national unifier was on display in his attempt to toe a narrow line while discussing racial injustice – rejecting the most aggressive reform proposals pushed by protesters of the Minneapolis police killing of George Floyd but criticising Trump's repeated declinations to denounce hate groups.

"I believe in law and order. I've never supported defunding the police," Biden said. "But I also believe injustice is real. It's a product of a history that goes back 400 years, the moment when Black men, women and children were brought here in chains. I do not believe we have to choose between law and order and racial justice."

Biden, who has not slowed his pace of campaigning since Trump announced he tested positive for the coronavirus on Friday, has made trips to Michigan and Florida over the past few days.

Earlier in the day, Biden attended a virtual fundraiser from Wilmington with Democrat congressman Jim Clyburn, who helped resuscitate his campaign during the South Carolina primary.

The Gettysburg speech comes a day after Trump was released from Walter Reed National Military Medical Centre and encouraged Americans not to be afraid of the coronavirus.

Our weekly newsletter will deliver expert analysis of the race to the White House from our US correspondent Matthew Knott. Coming soon. Sign up now for the Herald‘s newsletter here, The Age‘s here, Brisbane Times‘ here and WAtoday‘s here.

"Don't let it dominate you. Don't be afraid of it," Trump said on Monday in a video from the White House. Trump, who is still contagious, tweeted on Tuesday that he is "looking forward" to his second debate with Biden next week.

Biden slammed Trump's handling of the pandemic at a town hall in Miami on Monday night, urging him to institute a national mask mandate.

"Anybody who contracts the virus by essentially saying masks don't matter, social distancing doesn't matter, I think is responsible for what happens to them," Biden said when asked if Trump is partly responsible for his health situation.

Biden has maintained an advantage over Trump in polls nationally and in Pennsylvania. A Monmouth University survey released on Tuesday showed Biden leading by between 8 and 11 percentage points in Pennsylvania, depending on voter turnout. Half of Monmouth's poll was conducted before the President's diagnosis became public. The survey results were almost the same before and after.

Biden has increasingly travelled to areas where Trump has strong support, visiting an area of Miami with a large Cuban population on Monday, and going to Johnstown and other parts of western Pennsylvania last week.