Biden takes on grandad duties: President stops in Philadelphia to join granddaughter Natalie, 18, on a college tour of the University of Pennsylvania – where he was paid $1million as a professor

Like many high-school seniors at this time of year, Natalie Biden made a college visit on Friday as she weighs where to study.

Unlike most seniors, however, she brought the president of the United States with her.

After delivering a speech on the economy in Maryland, President Joe Biden flew to Philadelphia to join his granddaughter for a tour of the University of Pennsylvania.

They spent about two hours meeting officials and seeing facilities, before visiting the college bookstore where Biden posed for selfies and could even be seen talking on wellwisher’s phone.

They were joined for the tour by Penn President Elizabeth Magill, Sophia Rosenfield, Professor of History – suggesting a possible course of study – and student Emma Demonte.

The president has deep ties to Penn. Natalie’s father, Biden’s late son Beau, graduated from there, as did Biden’s daughter and Natalie’s sisters Naomi and Finnegan.

Now 18-year-old Natalie looks as if she might be the next Biden to attend the Ivy League university. 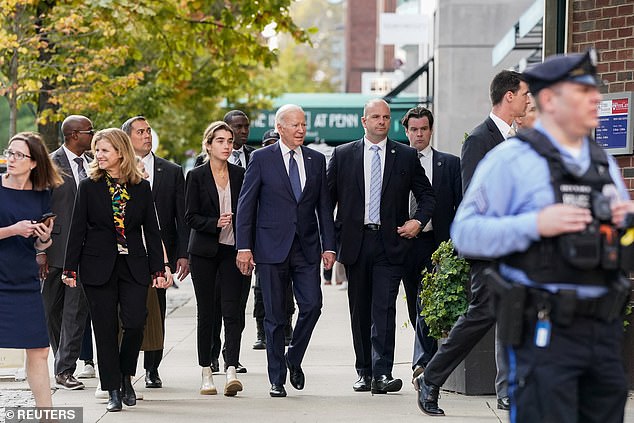 President Joe Biden spent two hours on Friday with his granddaughter Natalie, 18, on the campus of the University of Pennsylvania. Natalie is in the last year of high school 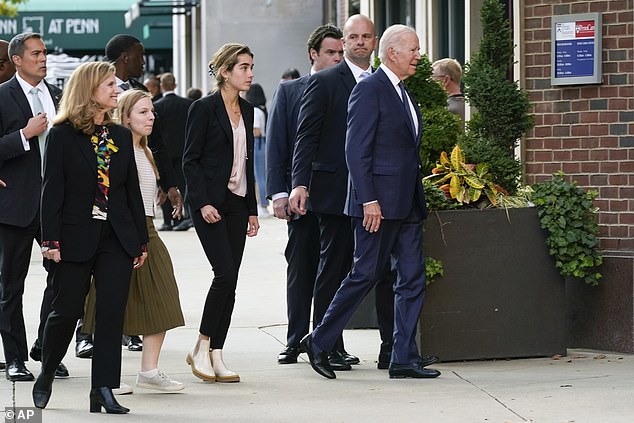 Liz Magill, president of Penn (left) joined the Bidens for their tour as did a professor of history – suggesting a possible course of study for 18-year-old Natalie 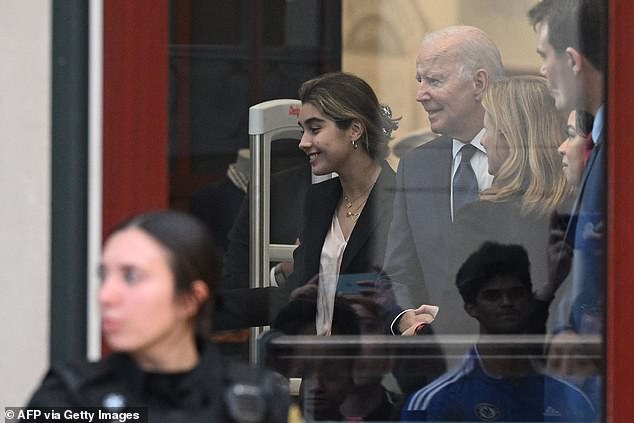 The president has deep ties to the university: Natalie’s father, Biden’s late son Beau and Bidens daughter Ashley graduated from there, as did two granddaughters — Natalie’s sisters — Naomi and Finnegan.

And Biden himself held a $2 million post there, serving as Benjamin Franklin Presidential Professor of the Practice before resigning to run for president.

Now 18-year-old Natalie looks as if she might be the next Biden to attend the Ivy League university.

The visit in the warm fall sun came at the end of a busy week, which saw Biden visit Puerto Rico and Florida to survey storm damage, and a trip to New York on Thursday to tout investment in technology and raise money for Democrats.

On Friday he visited a factory in Maryland where he blamed the actions of Saudi Arabia and Russia for forcing up gas prices, as he tried to say that his administration was driving down costs – while Republicans would let them rise again.

He used a speech at a Volvo engine plant to mark National Manufacturing day to talk up what he and his team believes is a record of economic success.

‘Every kitchen table cost is going to go up not down,’ he said as he painted a dark picture of what a Republican win would mean for families.

‘And I realize costs are going up on food and I was able to bring gasoline down well over $1.60, but it’s inching up because of what the Russians and the Saudis just I’m not finished with that.’

This week his hopes that gas prices would keep inching down were dashed when the OPEC+ oil alliance announced it was cutting production. 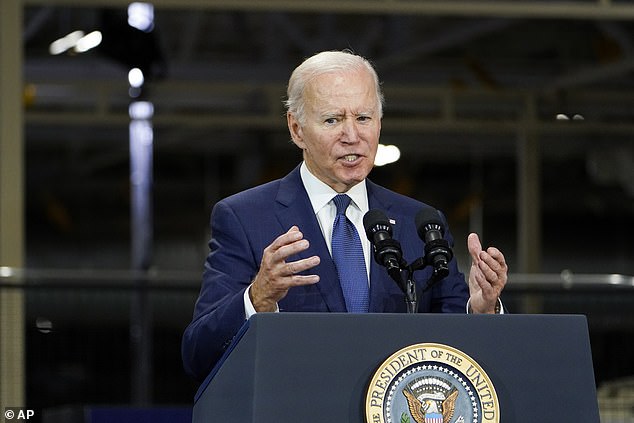 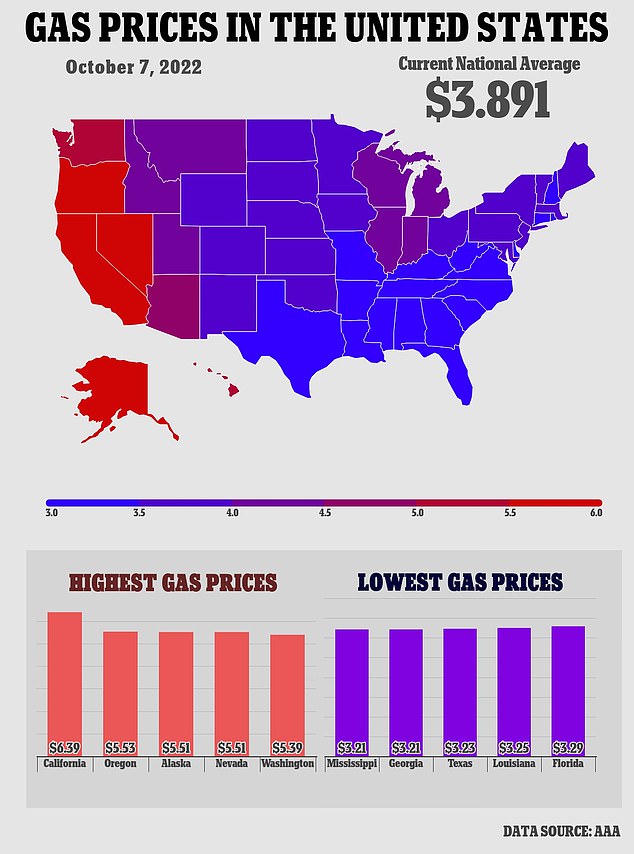 Gas prices have begun going up again across the U.S. after falling in recent weeks 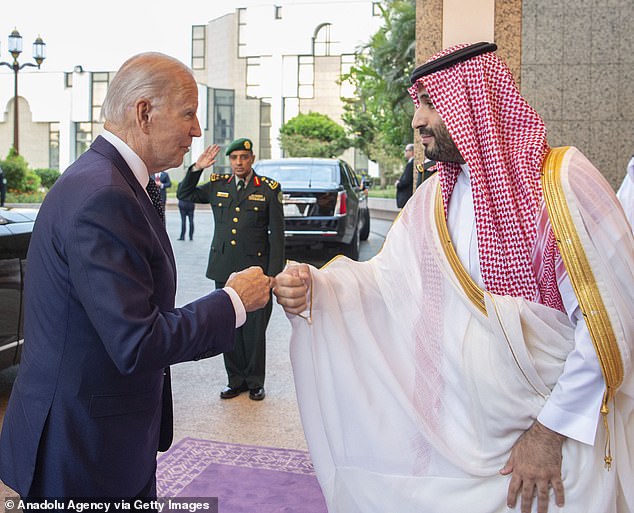 It was particularly embarrassing for Biden who gambled on a public meeting with Saudi Arabia Crown Prince Mohammed Bin Salman, who is accused of plotting the assassination of US-based journalist Jamal Khashoggi, in the hope of mending relations.

And it comes a month before midterms that could return control of the House and the Senate to Republicans.

In his remarks, Biden warned that Republicans would enact policies that could spell the end of Social Security, Medicare and veterans benefits.

He also called out several Republican lawmakers by name, saying they had written to his administration calling for money for the districts despite voting against the bipartisan infrastructure bill and dismissing it as socialism.

He highlighted the latest jobs report, that showed 263,000 jobs were created in September – along with some 10 million during his time in office.

But even with so much good news to share, he could not help starting with a gaffe.

‘We start off with two words: Made in America,’ he told his audience in a warehouse filled with machinery and American flags.

‘Made in America. It’s not hyperbole.’ 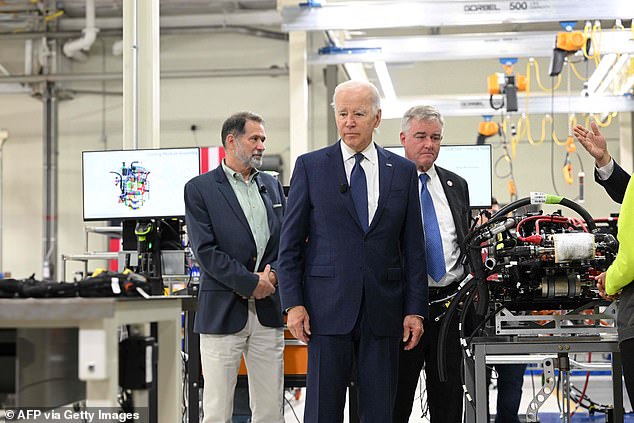 After struggling for much of his term with crippling inflation and record prices at gas pumps, Biden and his team believe they have a good story to tell.

Biden is leaning in to his economic record after several recent legislative victories and a sense that the outlook is improving just in time for the midterms.

‘All across America, we’re proving “Made in America” isn’t just a slogan, it’s a reality, for proving that our best days are ahead of us, not behind us,’ said after after touring the facility.

A day earlier he predicted that a $20 billion investment by IBM in New York’s Hudson River Valley will help give the United States a technological edge over China, during an appearance with two House Democrats in competitive races.

He said IBM’s commitment was part of a larger manufacturing boom, spurred by this summer’s passage of a $280 billion measure – the CHIPS and Science Act – intended to boost the semiconductor industry and scientific research.

That legislation was needed for national and economic security, Biden said in Poughkeepsie, adding that ‘the Chinese Communist Party actively lobbied against’ it.

‘The United States has to lead the world of producing these advanced chips — this law is going to make sure that it will,’ Biden said.

The CHIPS and Science Act, which Biden signed in August, was a rare bill for which the president was able to win bipartisan support. 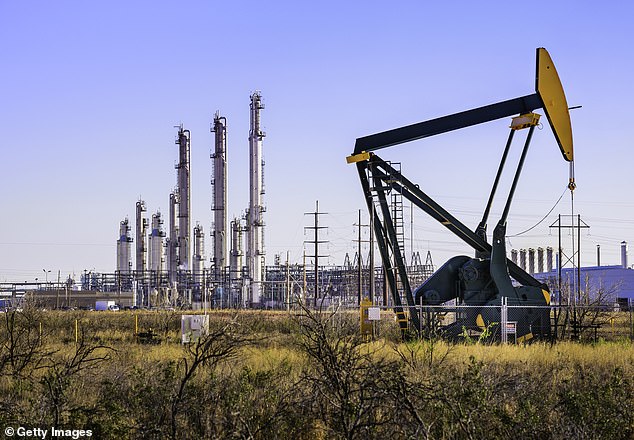 This week conservative economists said the U.S. economy could be making an extra $100 billion a year from rising oil prices if Donald Trump’s policies had been left in place, and Republicans stepped up their attacks on Biden’s handling of the issue

And it has given Democrats hope that voters will respond to good news, despite months of economic pain.

Republicans stepped up their attacks on Biden, however, saying it was his policies that were raising prices at the pump.

‘Under Biden – OPEC controls our destiny rather than American energy independence,’ Pat Harrigan, a Republican House candidate in North Carolina, said in a tweet.

Republican Study Committee Chairman Jim Banks tweeted: ‘US oil production is down 1.2 million barrels per day since it peaked under President Trump. Biden must stop his war on American energy!’

Republicans argue for loosening government restrictions on U.S. energy production as a way to lower costs.

Sen Lisa Murkowski said: ‘The Biden administration has had more than a year and a half to prepare for this turn of events, including more than seven months since the start of Russia’s catastrophic war against Ukraine, but failed to do so.

‘Instead of approving key projects and reforming the broken processes that hold them back, the administration has sold unprecedented volumes from our emergency oil reserves.’

In the meantime, Biden has accused oil and gas companies of profiteering and called on Congress to find ways to reduce OPEC+’s power over prices.

‘The president is also calling on U.S. energy companies to keep bringing pump prices down by closing the historically large gap between wholesale and retail gas prices — so that American consumers are paying less at the pump,’ said Nationa Security Adviser Jake Sullivan and economic adviser Brian Deese in a joint statement.