Budapest: The captain of a cruise ship that collided with a tour boat that sank on the Danube River in the heart of the Hungarian capital Budapest has been taken into custody.

The 64-year-old Ukrainian man, known only as C Yuriy, is suspected of endangering water transport leading to the deaths of at least seven people on board the tour boat. 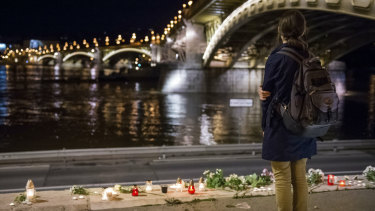 Hungarians have paid tribute at the site where a tourist boat sank on Wendesday night, Budapest time. Credit:AP

Hungarian rescue officials said there was little chance of finding survivors after the boat with South Korean tourists on board sank, with 21 still missing.

The boat, the Mermaid, was cruising when it collided with a larger luxury passenger boat during a rainstorm on Wednesday evening, Budapest time, causing it to capsize and sink with 33 South Korean tourists and tour guides, and two Hungarian crew aboard.

"I wouldn't say there is no hope, rather that there is a minimal chance [of finding survivors]," Pal Gyorfi, a spokesman for the Hungarian national ambulance service, told the M1 state broadcaster.

"This is not just because of the water temperature, but [also] the strong currents in the river, the vapour above the water surface, as well as the clothes worn by the people who fell in." 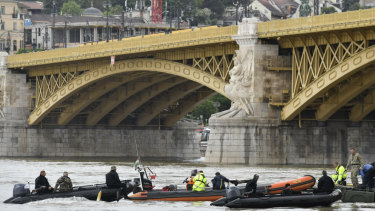 Rescuers in boats work to prepare to recover the capsized boat.Credit:AP

The seven people rescued were suffering from hypothermia but were stable, a Hungarian ambulance spokesman said. Police said the seven people who died had no life vests on.

The Mermaid turned on its side and sank within seconds of the collision under a bridge near the Parliament building.

Video footage from a security camera screened by police showed the bigger boat catching up from behind at a higher speed, clipping the Mermaid's left side.

"The [Mermaid] for some reason turns into the way of the Viking. And the Viking as it bumps into it, pushes it… and within seven seconds … [Mermaid] sinks," Pal said. 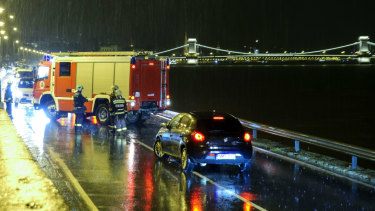 Rescue efforts are being hampered by the wild weather. Credit:AP

Police said a criminal investigation was under way to determine the cause of the accident, but declined to say if the bigger vessel, the 135-metre Viking Sigyn, put out any signals for help.

The hull of the Mermaid, a 27-metre double-decker river cruise boat, was found on the riverbed a few hundred metres from its usual mooring point. 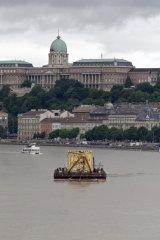 A vessel with a crane approaches the site of the accident. Credit:AP

A crane ship docked near the wreck on Thursday in preparation for recovery operations while divers prepared equipment. Police said the rescue efforts were hampered by high water levels, strong currents and bad visibility.

"Those who were trapped in the hull or were stuck underneath can be lifted only once the wreckage is pulled out," police said.

Hungarian Prime Minister Viktor Orban offered his condolences to Seoul. South Korean President Moon Jae-in said authorities would work with the Hungarian government to investigate the cause of the accident.

People have laid flowers outside the South Korean embassy in Budapest, and burnt candles on the Danube bank. 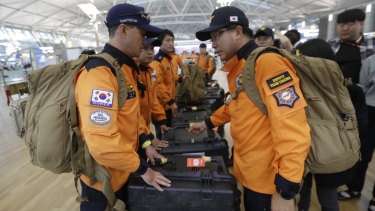 South Korean rescue team members prepare to board a plane to leave for Budapest at Incheon International Airport in Incheon, South Korea.Credit:AP

The Mermaid's owner, Panorama Deck, said the boat – a Soviet model manufactured in 1949 and refurbished in the 1980s – had been in its fleet since 2003, with regular maintenance.

"We are mobilising every resource we have to protect human lives," the owner said.

The larger Viking Sigyn is a 95-room floating hotel of the kind that has multiplied as Danube river cruises gained popularity in recent years.

"There were no injuries to Viking crew or Viking guests. We are cooperating with the authorities as required," said a spokesman for operator Swiss-based Viking Cruises.