Thousands of NSW residents will be excluded from a border bubble with Victoria as the Andrews government moves to prevent coronavirus from spilling over the state line.

The changes, announced on Tuesday, are set to cause headaches for some businesses that have workers spread across both states. 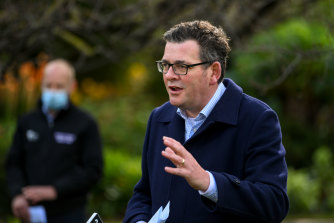 He said a tightening of border restrictions was unavoidable without a “ring of steel” of police checkpoints to limit movement out of Sydney. NSW recorded 172 new locally transmitted cases of coronavirus on Tuesday as Victoria emerged from lockdown after an outbreak seeded by Sydney removalists.

Mr Andrews, who unsuccessfully called for checkpoints around Sydney last week, has flagged a further tightening of border rules in coming days.

“I take no pleasure in having to essentially lock out those four communities from Victoria. But there’s a refusal to lock people in Sydney into Sydney, so therefore I have no choice but to make these changes,” he said.

The four municipalities will now be considered extreme risk zones and residents from those areas will need a specified worker permit, transit permit or an exemption to enter Victoria. All four councils are geographically closer to Melbourne than Sydney.

Some of Emma Ginnivan’s 15-person team was working away from home in Wagga Wagga when Mr Andrews revealed the area was no longer part of the border bubble on Tuesday.

Ms Ginnivan works at Red Airconditioning, a family-owned business based in Albury, and some of her employees live in NSW but others live in the Victorian towns of Wodonga, Wangaratta, Rutherglen, Killara and Leneva.

They meet in Albury and travel to work sites in Wagga for the week, then return home for the weekend, all without the need for a permit under the previous bubble arrangements.

Ms Ginnivan said she had “cold sweats” thinking about going through the worker permit process again, which Mr Andrews said would be granted “only when it is absolutely necessary”.

“Last time it took two months and affected both my mental and physical health,” she said.

Ms Ginnivan, the company’s business development manager, visited the Victorian government website on Tuesday afternoon but could not find information on the changes.

“If we can’t send staff to jobs, I question what will happen. Wasn’t the idea to keep people in work? Why add another unnecessary layer of confusion and challenges?” she said.

Wagga Wagga council area is the largest affected region, with a population of about 70,000. Mayor Greg Conkey said Tuesday’s decision would add an extra layer of complication for workers and residents. 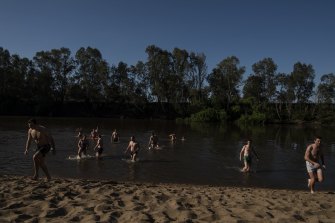 Wagga Wagga Beach on Murrumbidgee River. Wagga Wagga has been removed from the border bubble.Credit:Louise Kennerley

“There are a lot of associations in particular between this city and Wodonga. I can’t quite follow the decision – we don’t have any COVID cases here, nor do other bubble communities,” he said.

Cr Conkey gave the example of the livestock marketing centre in Wagga Wagga, one of the largest in Australia. “There would be hundreds of people coming to buy and sell there that will need to second-guess it now,” he said.

Murrumbidgee Council mayor Ruth McRae said many residents in the south of her municipality regularly travelled to Victoria for education, health and other essential services.

Although the Murrumbidgee Shire does not sit on the border, part of it is within 35 kilometres of Victoria.

Cr McRae said she understood premiers needed to act in the best interests of their constituents during the pandemic.

“It’s frustrating, it’s challenging,” she said. “But this is absolutely no time to be self-indulgent. This is a nation trying to work its way through it.”

She said the rules may be problematic for building contractors with employees working on infrastructure projects in Murrumbidgee, including sports precincts and other community facilities.

The Murrumbidgee Council area is home to about 4000 people. The Hay Shire has about 3000 residents.