Border Patrol agents shoot Russian man, 37, ‘who resisted arrest after he illegally entered US from Mexico’

The U.S. Border Patrol says an agent shot and wounded a Russian man suspected of crossing the border illegally in Arizona.

The agency said Friday that the man was flown to a Phoenix hospital and is expected to survive.

The Border Patrol says the unidentified agent attempted to arrest the man Thursday just east of the border town Lukeville.

Authorities say a physical altercation followed and the agent shot the man. The agent was not seriously injured.

‘On Thursday, 14 November 2019, a Tucson Sector Border Patrol agent discharged his service-issued firearm in an incident near Lukeville, Arizona,’ Customs and Border Protection said in a statement. 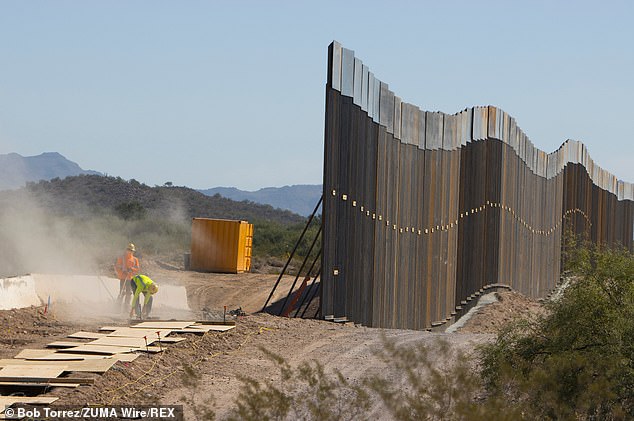 A section of the border wall is being constructed above along the boundary that separates Sonoyta, Mexico, and Lukeville, Arizona, in this November 4, 2019, file photo. A Border Patrol agent shot a Russian national who illegally crossed near Lukeville on Thursday, officials said

‘The subject, a citizen of Russia, was transported via helicopter to a Phoenix area hospital for treatment of non-life threatening injuries.

‘As the agent attempted to arrest the subject, a physical altercation ensued, and the agent discharged his firearm, striking the subject.

‘The subject remains in the hospital at this time. The responding Border Patrol agent was not seriously injured in the encounter.’

Russian diplomats told the Sputnik news agency the person who was shot has been identified as Evgeny Gluschenko, 37.

The Russian government told Sputnik that it has sought consular access to him.

The Federal Bureau of Investigation will investigate the incident, according to CBP.

The Border Patrol has faced criticism over its use of force in the past, but the number of shootings has fallen over the past few years.

Earlier this month, an agent shot and killed a gunman who opened fire near Sunland Park, New Mexico.