Boris Johnson and Narendra Modi today pledged to pursue a free trade agreement which will double UK-India trade over the next decade.

The Prime Minister held a virtual bilateral meeting with his Indian counterpart this afternoon when they agreed to a ‘2030 Roadmap’ which they said will deliver a ‘quantum leap’ in relations.

Mr Johnson said the document will ‘mark the beginning of a new era in the UK-India relationship’ as the two countries seek to work closer together to tackle the world’s biggest problems.

Meanwhile, a new reciprocal migration deal between the two nations will allow young professionals to live and work in each other’s countries for up to two years.

The migration deal will also make it easier and quicker to return Indian nationals with no legal right to stay in the UK and vice versa. 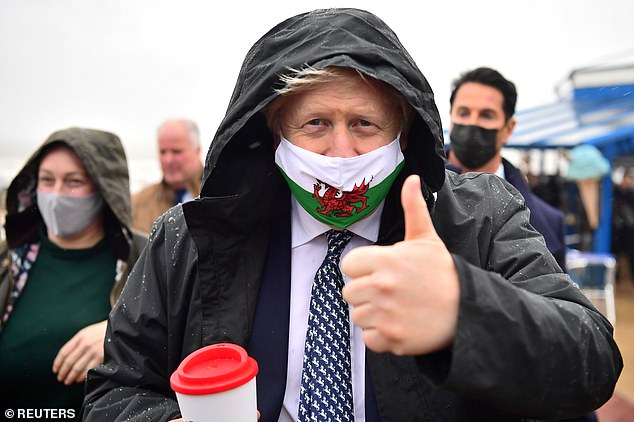 Boris Johnson, pictured during a visit to Barry in Wales yesterday, and Narendra Modi today pledged to pursue a free trade agreement which will double UK-India trade over the next decade 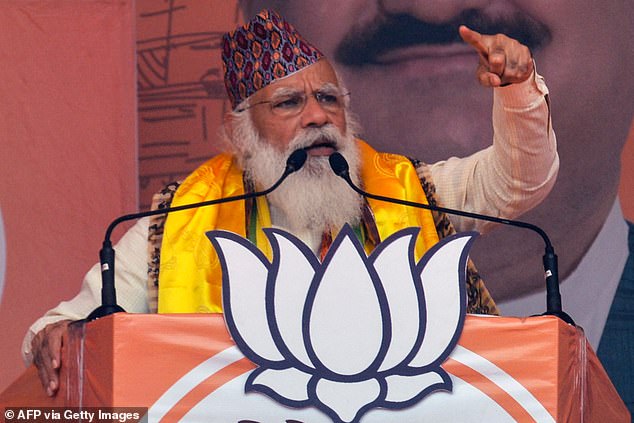 The bilateral meeting between Mr Johnson and Mr Modi had been due to take place in person.

But Mr Johnson cancelled a planned visit to India due to the country’s coronavirus outbreak.

The ‘2030 Roadmap’ agreed by the two leaders today will provide a framework for improved UK-India relations in areas like health, climate, trade, science and technology, and defence.

India has decided to elevate its overall relationship with the UK to the level of a ‘Comprehensive Strategic Partnership’, making Britain the first European country to be granted that status.

The two countries are aiming to deepen their economic relationship in the coming years, with Mr Johnson and Mr Modi confirming their intent to negotiate a free trade agreement. The ambition is to double UK-India trade over the next ten years.

Mr Johnson said in a statement: ‘The UK and India share many fundamental values. The UK is one of the oldest democracies, and India is the world’s largest. We are both committed members of the Commonwealth. And there is a living bridge uniting the people of our countries.

‘In the last week the British people have stepped up in their thousands to support our Indian friends during this terrible time in a demonstration of the deep connection between the UK and India.

‘This connection will only grow over the next decade as we do more together to tackle the world’s biggest problems and make life better for our people. The agreements we have made today mark the beginning of a new era in the UK-India relationship.’

Mr Johnson is due to see Mr Modi in person at next month’s G7 summit in Cornwall, with India having been invited to attend as a guest nation.

Mr Johnson announced yesterday that a new £1billion trade and investment deal with India will help to create more than 6,000 jobs.

The partnership includes more than £533million of new investment from India while UK businesses have secure export deals worth more than £446million.

The Migration and Mobility Partnership agreement will accelerate the process for returning Indian nationals with no legal right to stay in the UK and vice versa.

It will also enable young professionals between the ages of 18 and 30 to live and work in the other country for up to two years.

Ms Patel said: ‘I am committed to delivering for the British public a fair but firm New Plan for Immigration that will attract the best and brightest talent to UK through our new points-based immigration system, whilst clamping down on those who are abusing the system.

‘This ground-breaking new agreement with India is an important milestone in delivering on this pledge.

‘This landmark agreement with our close partners in the Government of India will provide new opportunities to thousands of young people in the UK and India seeking to live, work and experience each other’s cultures.

‘This agreement will also ensure that the British Government can remove those with no right to be in UK more easily and crackdown on those abusing our system.’