Boris Johnson and Nicola Sturgeon met at the COP26 climate change summit in Glasgow today just days after she accused him of having a ‘fragile male ego’.

Mr Johnson and Ms Sturgeon greeted each other with an awkward elbow bump at a breakfast reception hosted by the PM and the leaders of the UK’s devolved administrations.

Ms Sturgeon used the event to urge world leaders to take action to tackle climate change to ‘make sure that the eyes of history judge us fairly’. 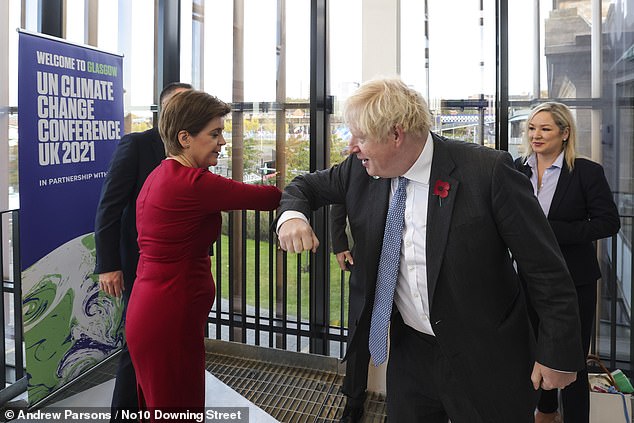 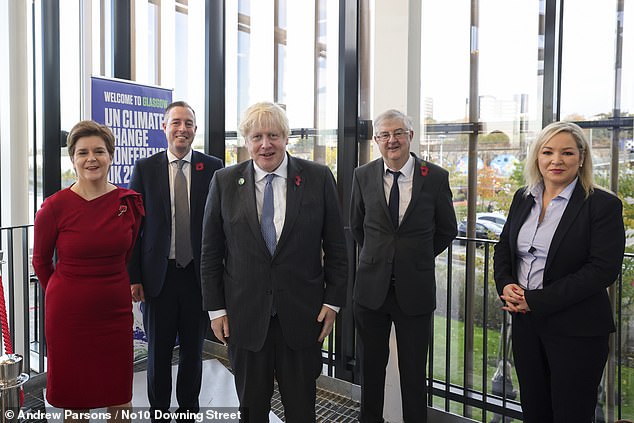 Ms Sturgeon had risked further souring relations with Mr Johnson last week after she told Vogue magazine that the PM seemed to have a ‘disinclination’ to meeting with her.

Asked about her working relationship with Mr Johnson, Ms Sturgeon said: ‘He tends to delegate most of his interactions with the devolved governments to Michael Gove.

‘That’s fine, Michael Gove and I work together well, but it’s a different approach to his predecessors.’

Asked why she thought this was the case, she said: ‘Maybe it’s just a bit of a fragile male ego. He seems to have a disinclination to be, metaphorically speaking, in the same room as me. It’s odd.’

Mr Johnson brushed off the criticism, insisting that he is ‘always delighted to work with Nicola’.

The PM said the SNP leader had been ‘very helpful in the run-up to COP and I’m sure she will play a very useful role as part of the pan-UK effort’.

Asked why he thought she said he has a ‘fragile male ego’, the Prime Minister replied: ‘Search me, I don’t know.’

Following the meeting, Ms Sturgeon said: ‘Glasgow has the opportunity to be a city which helps propel the world into the net zero age.

‘Given our industrial past – an industrial past shared by not all but many of the countries represented here today – we also have a particular responsibility to help lead the world into the net zero age.

‘As leaders here, you have that weight of responsibility on your shoulders.’

She added: ‘Thank you very much for making the effort to be with us here in Glasgow over this very important period – a period I’m sure history will look back on and judge as to whether we faced up to these challenges or not, so let’s make sure that the eyes of history judge us fairly.’