A former aide to Prince William will today be appointed as Britain’s top civil servant.

He will replace Sir Mark Sedwill, who announced he was quitting in June after losing a power struggle with the Prime Minister’s chief aide Dominic Cummings.

He will now be expected to help drive through the radical civil service reform demanded by Mr Cummings, who has warned a ‘hard rain is coming’ to Whitehall.

But allies dismissed the idea his relative inexperience would make him a pushover for the chief aide. ‘He’s a problem solver who gets things done,’ said one. ‘He has impressed everyone since he came back.’ 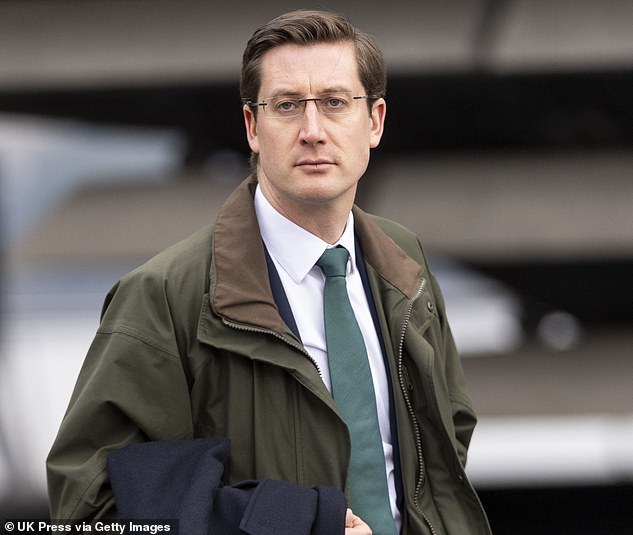 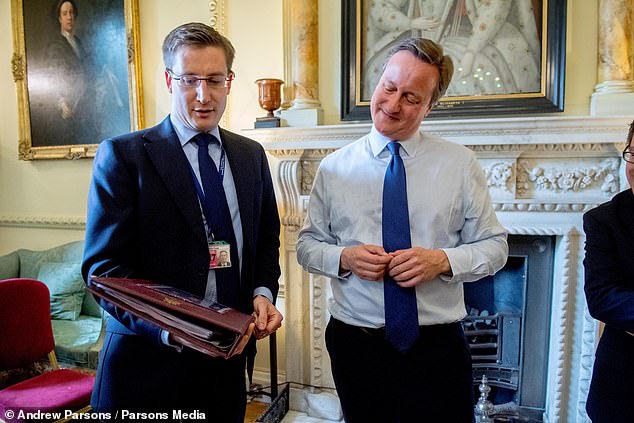 Pictured: Mr Case with David Cameron as he delivers a speech on his last day in Downing Street

Mr Case previously served as private secretary to both David Cameron and Theresa May in No 10.

He then appeared to have left the civil service fast track in 2018 after being poached by the royal household to become private secretary to Prince William.

However, he was brought back on secondment in May this year to the vacant post of permanent secretary at Downing Street to help out with the coronavirus response.

At the time, No 10 denied the move was designed to undermine Sir Mark.

The challenges in his in-tray

Brought in to beef up the response to the pandemic, Mr Case has already impressed, but will be expected to help stamp out the U-turns harming the Government’s record.

Dominic Cummings has warned a ‘hard rain is coming’ to Whitehall, but Mr Case must balance reform against getting the best out of a resistant Civil Service.

Getting Whitehall back to work

More than 95 per cent of civil servants worked at home during lockdown.

Very few have trickled back to their desks as of yet.

Likely to play a central role in ensuring the Government is prepared for the possibility of Britain fully leaving the EU without a trade deal at the end of this year.

This will mean moving parts of departments out of the capital to the regions.

But Sir Mark was ousted the following month after behind-the-scenes rows with Mr Cummings. He was handed a peerage and will receive a taxpayer-funded pay-off of almost £250,000.

Mr Case has held a string of top civil service jobs, including senior roles at GCHQ and the Northern Ireland Office.

He has little experience of serving in big delivery departments. But unlike Sir Mark, he is trusted by the administration’s Brexiteers as well as the Remainers of Whitehall. Whitehall sources last night insisted that Mr Case had not been ‘lined up’ for Sir Mark’s job.

It is understood he had been intending to return to the royal household and did not even apply for the post of Cabinet Secretary initially.

Only when the search was widened following a sift of initial candidates, who included several departmental permanent secretaries, did he agree to throw his hat into the ring.

The Prime Minister is said to have told Mr Case he wants him to become ‘my Jeremy Heywood’ – a reference to the legendary former Cabinet Secretary who served as a Whitehall troubleshooter for four prime ministers.

The role of Cabinet Secretary is the most powerful in Whitehall and includes providing the link between Government and the Queen.

But this will now be filled by the PM’s chief Brexit negotiator David Frost.

Mr Case faces an immediate challenge in balancing demands for reform of Whitehall with the need to smooth feathers ruffled by the departure of Sir Mark and four other permanent secretaries this year.

He will also be expected to help oversee the PM’s push to get hundreds of thousands of civil servants back to their desks following the lockdown. The PM has ordered long backlogs in the issuing of key documents like passports and driving licences to be cleared.

And he will play a key role in the reorganisation of the centre of Government. Mr Cummings has ordered the establishment of a new ‘collaboration hub’ in the Cabinet Office where he and other senior officials will try to fuse policy making with delivery.

One government source said: ‘With all the U-turns, things are clearly not working as well as we want them to be, but hopefully you will now see that start to change.’

Ministers will be formally told of Mr Case’s appointment at a meeting of the Cabinet this morning.

By Daniel Martin, Policy Editor for the Daily Mail

Boris Johnson’s new top civil servant was hired from Kensington Palace, where he is credited with boosting William and Kate’s public image.

Now Simon Case has to try to do the same for the Government, which has been rocked by a string of U-turns since the onset of the coronavius crisis.

The 41-year-old high-flyer – described as ‘patriotic to his core’ – has earned the Prime Minister’s trust since he was appointed on secondment from Kensington Palace as No 10 permanent secretary in May.

Pictured: Mr Case, who will take over as Cabinet Secretary from Sir Mark Sedwill

Now the married father of three – who is a fan of Christmas jumpers – is to be head of the Civil Service, a hugely powerful role that gives him the task of reforming Whitehall from top to bottom.

His appointment was a surprise as it had been thought he wanted to return to his royal duties as the Duke of Cambridge’s private secretary.

During this period he modernised the prince’s operations and helped boost his and his wife’s standing after Harry and Meghan decided to depart for the US.

Born in Bristol in 1978 and educated at Bristol Grammar School, Mr Case studied history at Cambridge University before entering the Civil Service in 2006. He also completed a PhD in political history at Queen Mary University of London.

He worked first in the Ministry of Defence and subsequently served as head of the Olympic Secretariat, a temporary team in the Cabinet Office overseeing the delivery of the 2012 games.

When she became Prime Minister, Theresa May gave him a new role as director general for the UK-EU Partnership, in which he worked on key aspects of Brexit.

In this role he earned the respect of key Brexiteers at a time when most Government officials were viewed with suspicion by Leavers.

However in 2018 he left Government to become private secretary to the Duke of Cambridge.

Now he is back in No 10 it remains to be seen how well he will work together with Dominic Cummings, Mr Johnson’s controversial chief adviser.

Mr Case is married with three daughters and lists his recreations as cycling, rowing, running, swimming and amateur history, according to Who’s Who.

By Rebecca English, Royal Editor for the Daily Mail

Prince William is losing the right-hand man credited with helping him ‘step up’ as a future international statesman.

Simon Case was brought into Kensington Palace as the second in line to the throne’s private secretary – his most senior member of staff – almost two years ago.

Mr Case was intimately involved in successful high profile official tours to Israel, the Occupied Palestinian Territories, Pakistan, Kuwait and Oman, all of which were seen to have given the future king more gravitas on the international stage.

Mr Case was also party to this year’s ‘Megxit’ negotiations between the Queen, Prince Charles, Prince William and Prince Harry. 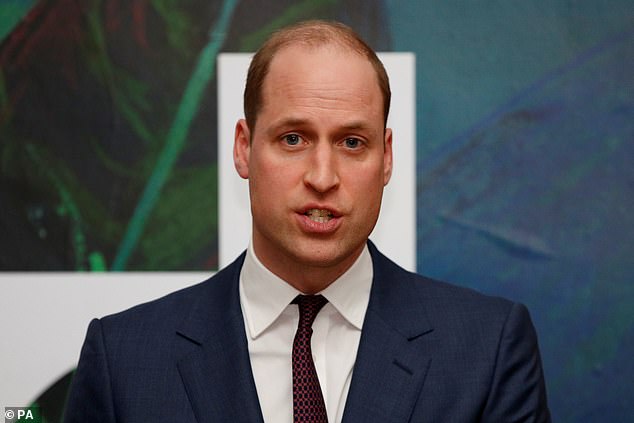 It had been suggested that Mr Case’s move to Downing Street was a temporary one and that he was keen to return to royal service, with the assumption being that he would help guide William in the next stage of his royal career.

But sources made clear last night that he had built a strong team around him and if anything his move to Government would help ensure William’s full potential was better utilised, particularly given the challenges currently facing the country.

William’s current communications secretary, Christian Jones, is standing in for Mr Case and will be considered a strong contender for the permanent role.

Sources said Mr Jones – who has been behind William’s well-received handling of the coronavirus crisis – will remain acting private secretary for the ‘foreseeable future’.