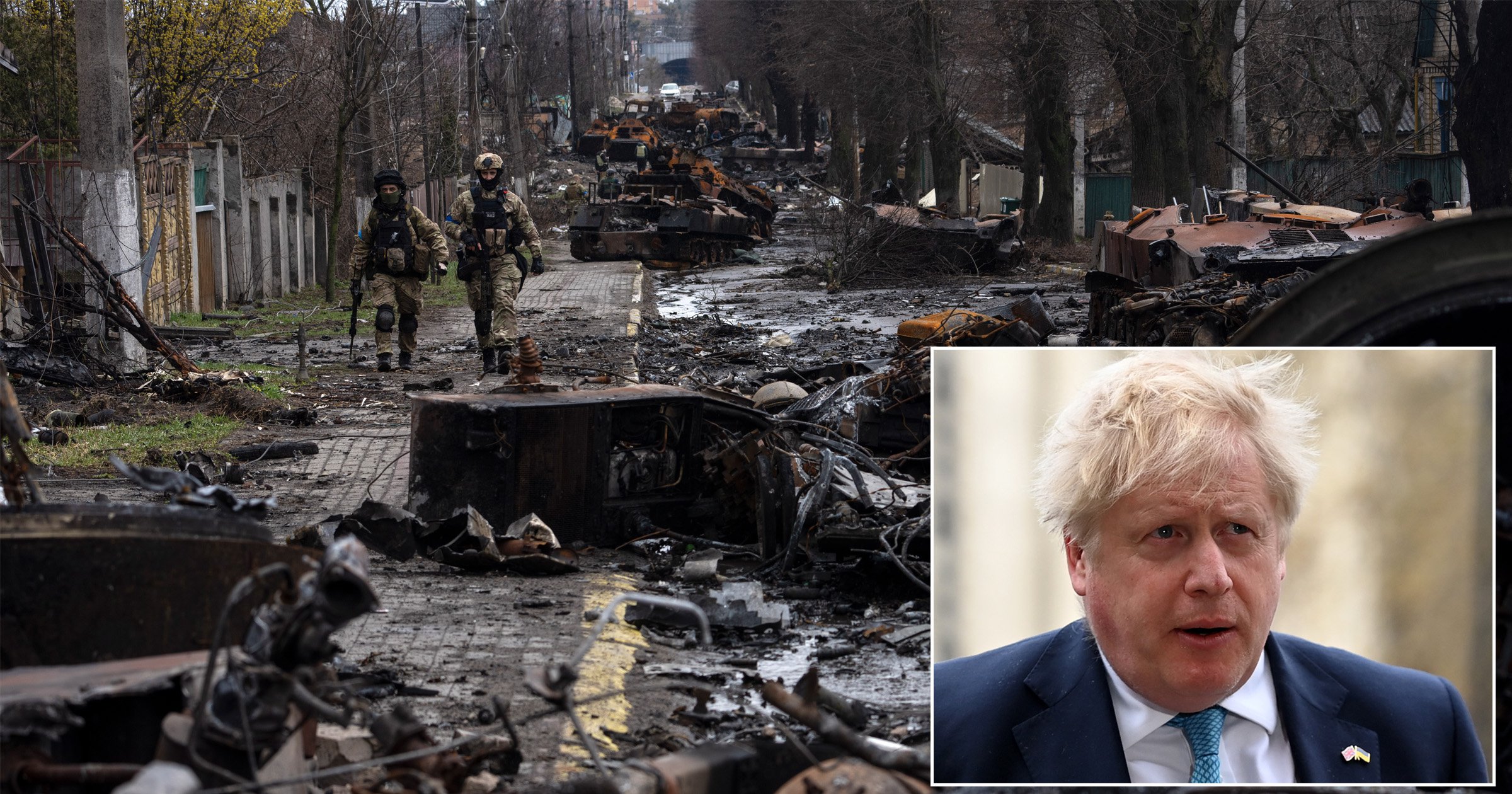 Boris Johnson has now vowed not to rest ‘until justice is served’ as he condemns Russia’s ‘despicable attacks’ on Ukrainian civilians near Kyiv.

The Prime Minister said ‘no denial or disinformation from the Kremlin’ can conceal that President Vladimir Putin is ‘desperate’ and ‘his invasion is failing’.

Mr Johnson’s interventions comes amid widespread horror around the globe at pictures emerging from around the Ukrainian capital as Russian forces retreat.

Mutilated and booby-trapped bodies litter the street or Bucha and Irpin, where countless civilians with their hands tied have been found dead, seemingly killed by Russian troops.

An adviser to Ukrainian president Volodymyr Zelensky said earlier that the scenes resembled a ‘horror movie’.

Ukrainian soldiers used cables to drag bodies off one street from a distance amid fears they may be booby-trapped.

In a statement this evening, Mr Johnson said the UK is ‘stepping up’ its sanctions and military support, and ‘bolstering’ humanitarian help for people on the ground.

He said: ‘The UK has been at the forefront of supporting the International Criminal Court’s investigation into atrocities committed in Ukraine.

‘The Justice Secretary has authorised additional financial support and the deployment of specialist investigators – we will not rest until justice is served.’

Ms Truss said Russia would not be allowed to cover up its involvement through ‘cynical disinformation’.

The Russian defense ministry denied that Russian forces killed civilians in Bucha, saying that videos and photographs of bodies were ‘yet another provocation’ by the Ukrainian government.

President Zelensky accused Russia of genocide amid the global backlash to the scenes in Bucha.

Ukraine is demanding crippling new sanctions on Russia from major Western powers, while Germany said that those responsible for war crimes should pay.

Russia-Ukraine war: Everything you need to know

Since Russia’s invasion of Ukraine began on February 24, the country has suffered widespread damages and loss of life amid a major bombing campaign.

Millions of people have fled the country, with thousands of British people opening up their homes to Ukrainian refugees.

During the course of the war, Ukraine’s President Volodymyr Zelensky has remained in Kyiv, despite the Ukrainian capital being subjected to a barrage of bombing.

Zelensky has continuously pushed for aid and support from world leaders, as well as pressing for fast-tracked NATO membership.

Meanwhile, Russia’s President Vladimir Putin has been widely condemned for his attack on Ukraine.

His actions have been met by harsh economic sanctions, bans from competing in major sporting events, and countries moving away from using Russian oil.

Get in touch with our news team by emailing us at [email protected].