Boy, 14, and woman, 34, die in hospital days after ‘deliberate’ fire at family home in Greenwich that also killed five-year-old boy

The mother and brother of a five year old boy who died after a deliberately-started maisonette fire have also passed away, police have revealed.

Emergency crews were called to the blaze just before 6am on Saturday in which three people had been pulled from the burning property.

A 34-year-old woman and her two sons aged 14 and five were taken to hospital suffering from smoke and fire inhalation. 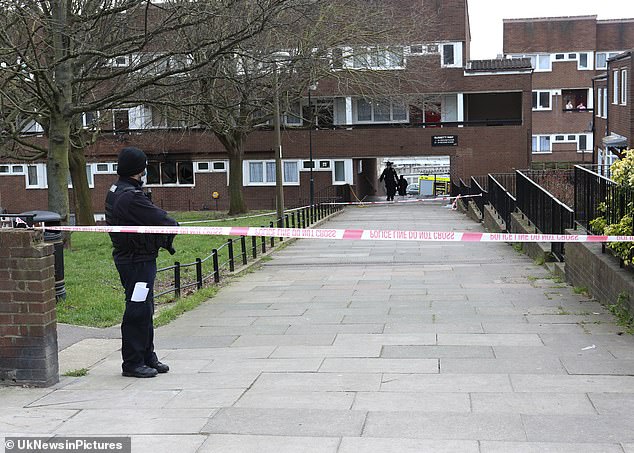 The fire service said six engines and around 40 firefighters were called to the blaze at the block of maisonettes in Russett Way, Greenwich, at 5.44am on Saturday

But police have now revealed his mum and older brother have also died from their injuries following the blaze in Russett Way, Lewisham, south east London.

Officers investigating the blaze say the 14-year-old boy died from his injuries in hospital on Wednesday. And they revealed the 34-year-old mum had died today.

All three were members of the same family and their relatives have been informed and are being supported by specialist officers.

Detectives from the Met’s Specialist Crime Command believe the fire was started deliberately, but they are not looking for anybody else in connection to the investigation.

Detective Chief Inspector Laurence Smith, said: ‘This was a truly awful incident and we are doing everything we can to support the family’s next of kin. 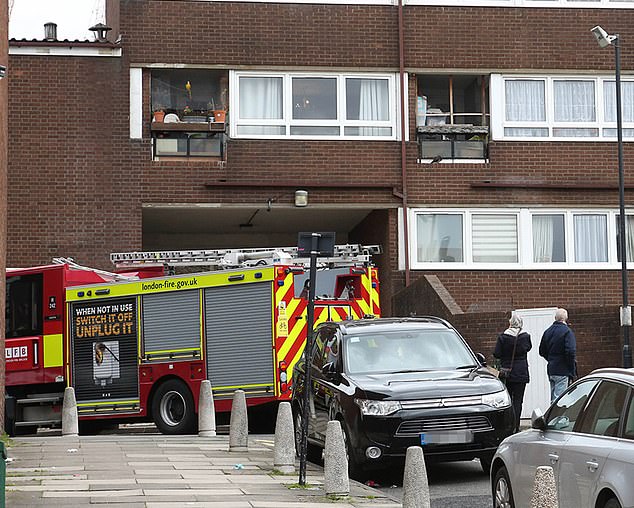 Firefighters rescued a woman and two children from the top floor of the building, London Fire Brigade said

‘We have been working alongside specialist investigators to establish the cause of the fire and it saddens me to say that we believe it was started deliberately, inside the address, by one of those inside.

‘While I accept we may never know the circumstances, I am still very keen to hear from anybody who has information that could shed any light of this tragic incident.’

Heartbroken school friends of a five-year-old boy killed in a blaze at his home have paid tribute to him the day after he died.

Known locally as Joseph, or JJ to his pals, the fun-loving boy was mad for racing cars, digger trucks and the school playground game tag.

Only on Friday, a classmate, also aged five, was running through the nearby playing area with JJ enjoying a game of tag. 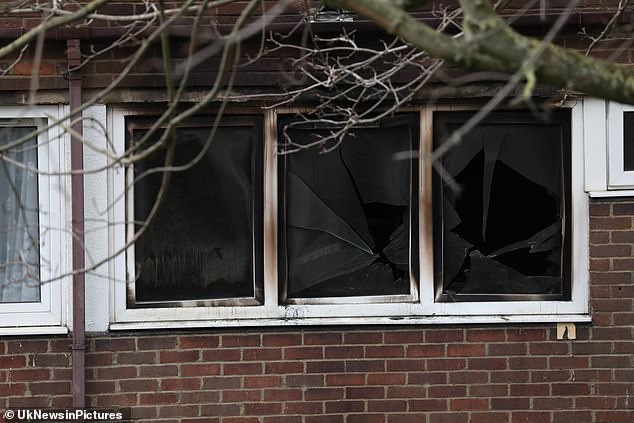 All three were taken to hospital by London ambulance crews. (smashed windows at the property)

With his mother, who asked to remain anonymous, he left a note reading: ‘I will miss you’ and also left a red toy racing car.

His mum said: ‘It is very hard for him to understand. They were playing tag and Joseph was calling after him on Friday. It’s just so awful. We can’t believe he’s gone.’

Balloons and cards signed ‘JJ’ along with flowers were laid to rest on garden walls flanking the family’s 1980s maisonette home.

While another said: ‘For my lovely Joseph forever in my heart.’

One local resident Chantelle Riches, 26, said: ‘He was a happy young chap.’

The full time Mum added: ‘He was always smiling, playing with the kids helping his mother a lot and taking out the rubbish.’

Ms Riches, whose children played with JJ said last week: ‘I knew his mum to say hello to. She is a nice lady.’

JJ attended the nearby Morden Mount Primary School and was popular with teachers and pupils.

Police are appealing for information about the blaze and are urging anyone who can help to come forward.