When he isn't raving about how the deep state is conspiring against him, Donald Trump loves to boast about the economy, claiming to have achieved unprecedented things. As it happens, none of his claims are true. While both GDP and employment have registered solid growth, the Trump economy simply seems to have continued a long expansion that began under former president Barack Obama. In fact, someone who looked only at the past 10 years of data would never guess that an election had taken place. 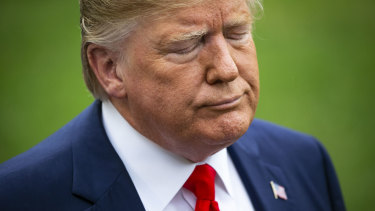 But unlike previous presidents, who were just unlucky to preside over slumps, Trump has done this to himself, largely by choosing to wage a trade war he insisted would be "good, and easy to win".

The link between the trade war and agriculture's woes is obvious: America's farmers are deeply dependent on export markets, China in particular. So they're hurting badly, despite a huge financial bailout that is already more than twice as big as the Obama administration's auto bailout. (Part of the problem may be that the bailout money is flowing disproportionately to the biggest, richest farms.)

Shipping may also seem an obvious victim when tariffs reduce international trade, although it's not just an international issue; domestic trucking is also in recession.

The manufacturing slump is more surprising. After all, America runs a large trade deficit in manufactured goods, so you might expect that tariffs, by forcing buyers to turn to domestic suppliers, would be good for the sector. That's surely what Trump and his advisers thought would happen.

But that's not how it has worked out. Instead, the trade war has clearly hurt US manufacturing. Indeed, it has done considerably more damage than even Trump critics like yours truly expected.

The Trumpist trade warriors, it turns out, missed two key points. First, many US manufacturers depend heavily on imported parts and other inputs; the trade war is disrupting their supply chains. Second, Trump's trade policy isn't just protectionist, it's erratic, creating vast uncertainty for businesses both here and abroad. And businesses are responding to that uncertainty by putting plans for investment and job creation on hold.

So the tweeter-in-chief has bungled his way into a Trump slump, even if it isn't a full-blown recession, at least so far. It's clearly going to hurt him politically, notably because of the contrast between his big talk and not-so-great reality. Also, the pain in manufacturing seems to be falling especially hard on those swing states Trump took by tiny margins in 2016, giving him the Electoral College despite losing the popular vote.

And while many presidents have found themselves confronting politically damaging economic adversity, Trump is, as I said, unique in that he really did this to himself.

Of course, that doesn't mean that he will accept responsibility for his mistakes. For the past few months he has been trying to portray the Federal Reserve as the root of all economic evil, even though current interest rates are well below those his own officials predicted in their triumphalist economic projections.

My guess, however, is that Fed-bashing will prove ineffective as a political strategy, not least because most Americans probably have at best a vague idea of what the Fed is and what it does.

So what will come next? Trump being Trump, it's a good bet that he'll soon be denouncing troubling economic data as fake news; I wouldn't be surprised to see political pressure on the statistical agencies to report better numbers. Hey, if it can happen to the National Weather Service, why not the Bureau of Economic Analysis (which reports, by the way, to Commerce Secretary Wilbur Ross)?

And somehow or other this will turn out to be another deep-state conspiracy, probably orchestrated by George Soros.

The scary thing is that around 35 per cent Americans will probably believe whatever excuses Trump comes up with. But that won't be enough to save him.