The telephone at the East Melbourne pad of governance lawyer and former senior public servant Mark Brennan must have been running hot over the weekend.

That’s because Bendigo boy Brennan has just the CV that makes him the ideal man for the job of independent sessional commissioner at the Victorian Commission for Gambling and Liquor Regulation.

In other words, Victoria’s answer to NSW commissioner Patricia Bergin, whose spectacular carriage of the NSW inquiry culminated in her finding that Crown was not suitable to hold a gaming licence for its new Barangaroo operation. Now that Premier Dan Andrews has moved its seventh casino review onto the front burner, finding someone to run it is an urgent priority.

Hence the interest in Brennan. A previous state Liberal government appointed him inaugural chair of the Victorian Commission for Gambling and Liquor Regulation. And Brennan was later Victoria’s and then Australia’s inaugural Small Business Commissioner, appointed by the federal Labor government.

But there’s competing interest. Crown chair Helen Coonan must add a Victorian flavour to her board following the departure of the dozy former AFL boss Andrew Demetriou on Friday.

And while Brennan has a track record in accepting difficult challenges, his reputation for strict governance might make Crown’s board a step too far.

Crown’s outgoing chief executive Ken Barton clung on in his role for five excruciating days after former NSW Supreme Court judge Patricia Bergin found the executive was “no match for what is needed” at the top of the listed casino group. But once he tendered his resignation on Monday morning, things moved very quickly. Less than four hours after the chief executive and managing director officially quit, his profile had been scrubbed from the casino operator’s website.

His departure came as no surprise given Commissioner Bergin’s scathing appraisal of the executive in her final report into the embattled operator commissioned by the state’s gaming and liquor regulator. Barton’s problems would “not be cured by the appointment of people expert in the field who report to him”, she added. 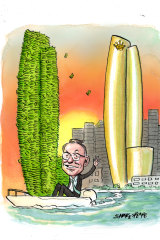 And Crown directors also apparently knew things weren’t likely to end well for the chief executive given their decision to appoint former Auckland SkyCity chief executive Nigel Morrison – a ready made successor – to the board in late January. But we digress.

If Barton’s departure seemed unceremonious after more than 10 years inside Crown and just over a year as chief executive, his pay packet will be some comfort.

The executive has taken home more than $26 million since he started at the casino group in March 2010 as chief financial officer. In his first year he nabbed a $400,000 sign-on payment in addition to a base salary of $385,000.

In 2016, Barton took home a total package of $3.5 million including a $1 million bonus from Crown’s now legendary 2014 long-term incentive plan.

Newswire AAP is in damage control after one of its largest customers Antony Catalano, owner of Australian Community Media told this newspaper on Monday that the company is “doomed” and he was planning accordingly. This was news to AAP’s board and executive, which have been gamely battling on since the company arose from the ashes last August when News and Nine Entertainment Co (owner of this newspaper) decided $15 million a year was too much to pay to subsidise the newswire.

“The AAP executive and board were unaware of any concerns on the part of ACM. We maintain a close operational relationship with ACM representatives and the feedback is always positive. We will seek further clarification on the opinions expressed in the article,” chief executive Emma Cowdroy told staff in an email.

“I appreciate this article makes for uncomfortable reading, but following recent high-level talks Jonty (Low, chairman) and I have had with numerous political figures, we believe AAP is strongly positioned.”

The non-compete undertaking made during the sale of AAP has run out, meaning News Corp’s rival news wire service is free to poach clients.

All this makes for maximum awkwardness when Cowdroy, Low and editor Andy Drummond front Senator Sarah Hanson-Young’s Senate inquiry into media diversity on Friday to emphasise the wire service’s “vital role in the media landscape”.

Qantas chief executive Alan Joyce appeared upbeat at Aussie’s Cafe inside Federal Parliament on Monday. And while he wasn’t prepared to tell CBD who he had met with, subsequent inquiries revealed the airline boss had met with Treasurer Josh Frydenberg and Deputy Prime Minister Michael McCormack. And no wonder too, given there’s just six weeks to go until the end of the JobKeeper lifeline propping up workers in a near-dormant airline sector. Joyce’s rivals at Virgin and a coalition of 13 companies and unions have jointly asked Prime Minister Scott Morrison for JobKeeper – renamed AviationKeeper – be extended past March, but Qantas has gone it alone on the lobbying effort. Last month, a company spokesman said the airline was having its own discussions with government about support for the industry.

How it’s going is anyone’s guess given a month ago the executive infuriated the government with his public pronouncement that either Virgin or Rex would not survive the coronavirus pandemic. But if there was an icy reception Joyce wasn’t letting on. He was smiles all round.