Battle for the beer garden! Britons are struggling to book tables outside pubs and restaurants amid mass scramble to secure spots for al fresco food and drinks ahead of reopening on April 12

Britons desperate for a post-lockdown pint at their local beer garden are facing a huge struggle to get a table with some pubs now booked up for months.

Diners are looking forward to when pubs and restaurants are allowed to reopen outdoor seating areas from April 12 as the Covid-19 lockdown begins to ease.

But one punter said he had called 20 pubs but ‘none have any space whatsoever’, while another said she could not get a table anywhere in London until late May.

Some workers have even taken April 12, a Monday, off work so they can be the first in – but it is proving hard to get a space for those who have not pre-booked.

There have even been claims on social media that some people are selling their pub bookings as the scramble intensifies with less than three weeks to ago.

However not all chains are operating a booking system, with Wetherspoon opening 394 of its beer gardens or terraces from April 12 on a first-come-first-served basis. 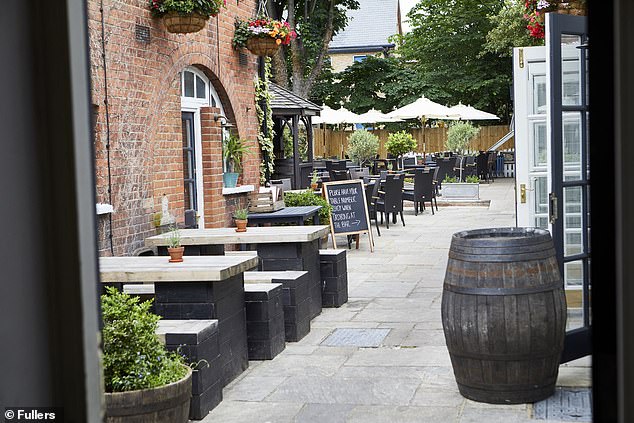 The Turks Head pub in Twickenham, South West London, already has many slots booked up 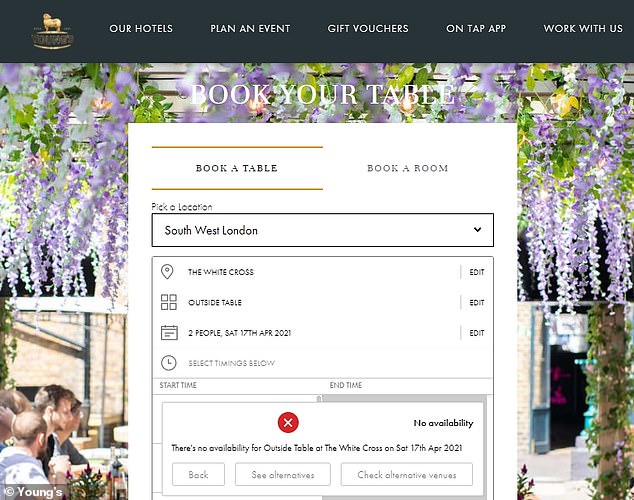 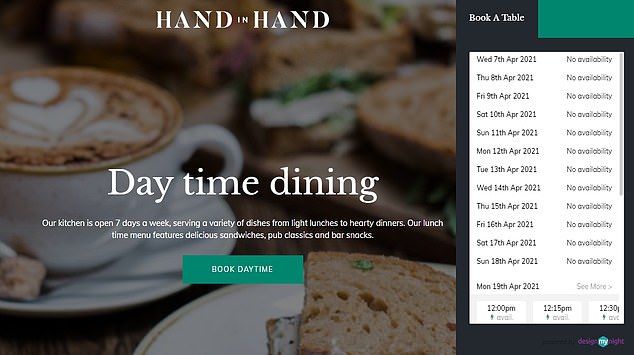 Other pubs and restaurants have received tens of thousands of bookings ahead of the reopening next month, leaving customers unable to get a table for weeks.

Among those struggling was Adam Bloodworth from London, who tweeted: ‘Just tried to book a pub, and can reveal that the whole *pubs opening on April 12* thing may as well be an illusion if you haven’t already got a booking! I’ve tried around 20 and none have any space whatsoever.’

Carrie Walsh added: ‘Have discovered that every pub garden in London is actually fully booked until late May. What have I been outfit planning for?! Where are us spontaneous and unorganised friend groups supposed to go?!’

She added: ‘I have now discovered that people are SELLING their pub bookings. I’m tired.’

Twitter user Lauren from Lancashire added: ‘It’s mental. We’ve really struggled. There’s a few places saying three or less just need to turn up and they’ll try and accommodate, but the thought of just wandering round trying to get in places is a bit s**t.’

And Tom Naden, who lives in Leeds, tweeted: ‘Is there actually a pub left in town or Headingley that isn’t fully booked for the weekend after April 12?’

Another Twitter user said they were ‘frantically booking pub beer gardens as though they were festival tickets’.

In Scotland, pubs will reopen two weeks later on April 26, but there is a similar situation with venues getting booked up.

Molly Upward, of Edinburgh, said: ‘Annoying me already that even (when) we can go pub or out for food, it’s gonna be near impossible cause everything’s fully booked!’

Ash Wilson added: ‘Get ya pub bookings in lads, Edinburgh is filling up fast in all the pubs from April 26. Tons of boozers already fully booked into May.’

Earlier this month pub bosses said bookings have gone ‘gang busters’, with up to twice as many reservations as when they reopened in July last year.

Rick Stein said 20,000 customers had booked into its Cornish restaurants in the last two weeks alone, while D&D has reported taking 50,000 reservations already.

It comes after the industry endured close to nine months of closures because of coronavirus, with more than 660,000 hospitality jobs disappearing in 2020.

The bookings revival also gives hope the UK’s economy will bounce back quickly as consumers unleash £180billion of cash they’ve saved during the pandemic.

Rules on putting tables on pavements and marquees up have also been relaxed to allow restaurants to make the most of outdoor dining.

Des Gunewardena, owner of D&D, which has 42 restaurants, said: ‘We are absolutely chocker. Some of our restaurants are full all the way through April and well into May.

‘We have got double the level of bookings already compared to when we reopened on Super Saturday last year – it’s way strong than we expected.’

Clive Watson, chief executive of City Pub Group, which has 48 sites, said: ‘It’s gone gang busters. People are desperate to catch up with their friends.’

Andy Hornby, boss of Wagamamas and Frankie & Benny’s, said: ‘There is a real sense of pent-up demand and we have seen really strong interest in our beer gardens in particular.’

Fuller’s, which has 400 pubs, said: ‘We are certainly taking a high level of bookings – people clearly can’t wait to get back to the pub, which is great to see.’