The sun beaming from brilliant blue skies was enough for bare arms, bicycle jaunts and hikes in Blackpool, London and Rylstone Cross, near Skipton, North Yorks. But just 75 miles from the walkers, Blakey Ridge was smothered in snow – one of many places to face numbing temperatures. It was one of the coldest Easter Mondays on record, with lows of -2C (28F) – a shock to the system following an Easter Sunday that was more like a balmy Summer’s day. 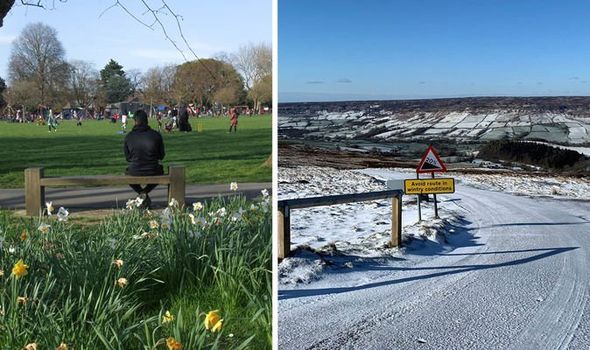 Jersey Airport had one of the hottest days yesterday, notching up 52F (11C). Northern parts of Scotland woke to snow, while there were flurries across the North-east and Cumbria. At Stanley Park in Blackpool, the daffodils were a charming backdrop for a photo of Elenor Rose, nine.

But in Slaley, Northumberland, they flopped in the face of the cold snap. Parts of south London also had early snow showers followed by sunshine.

A sub-zero chill is predicted for northern England today, while the mercury could drop to -7C in parts of Scotland.

But temperatures everywhere will start to climb by the end of the week – and are set to warm up in time for the opening of England’s pub gardens.