England fans will sink 15 million pints today and score a £370m World Cup boost for the economy as the Three Lions take on Senegal.

Britain’s boozers will be rammed as punters pile in for tonight’s last-16 clash against the Lions of Taranga.

Experts predict a bumper £22m will be spent in the nation’s pubs as part of a £273m retail spending spree across this round of eight knockout games.

Fans will flock to supermarkets to stock up on matchday essentials — laying out £174.4m on food and drink alone. 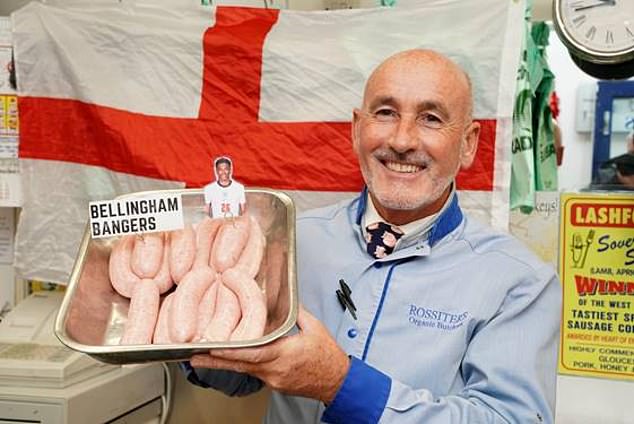 At Rossiter’s Organic Butchers in Birmingham, punters were lining up to buy special Bellingham bangers — named after the England prodigy, 19 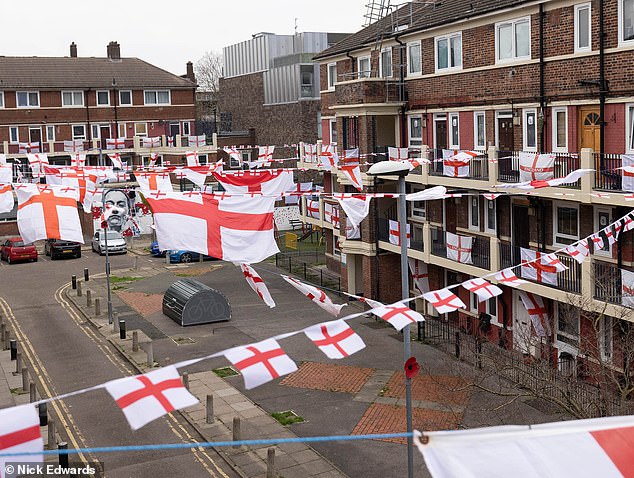 Saint George’s Cross flags on display at the Kirby Estate, Bermondsey, ahead of the England vs Senegal football World Cup Clash 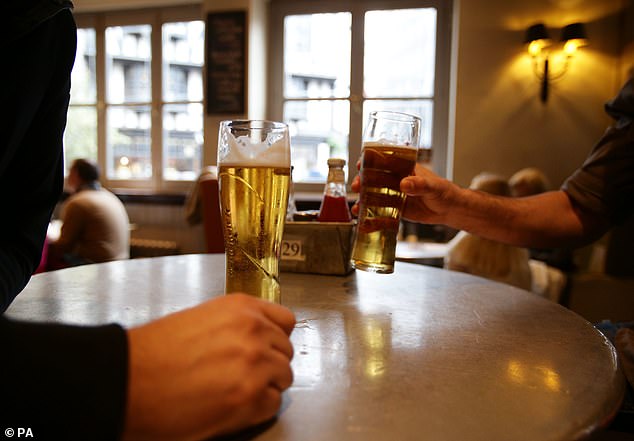 The British Beer and Pub Association (BBPA) said pub-goers will guzzle 15m pints today, with thousands expected to have booked off work tomorrow

At Rossiter’s Organic Butchers in Birmingham, punters were lining up to buy special Bellingham bangers, named after the England prodigy.

‘We need to play Phil Foden and Marcus Rashford. We need the same team that wins, like the last game. I am super excited, I think we are going to win and I’m predicting a 2-1 win to England. We are going to win the World Cup — it’s coming home.’

Some £53m will be spent on new TVs and electricals, £34,7 on sportswear and £11.2m on souvenirs, according to vouchercodes.co.uk’s World Cup Spending Report. 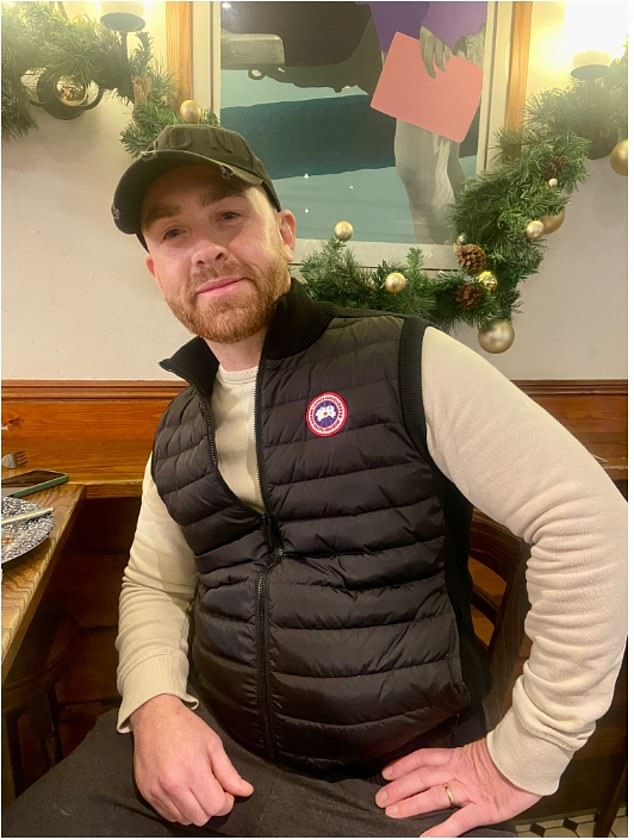 James, 43, from Birmingham, speaking to MailOnline from a Wetherspoon in Victoria, said ‘it’s going to be a very tough game’ but told added ‘we are going to win the World Cup’

The British Beer and Pub Association (BBPA) said pub-goers will guzzle 15m pints today, with thousands expected to have booked off work tomorrow.

Around £94m is expected to be spent across the whole hospitality sector. Matt Todd, who runs the Wonston Arms in the Hampshire hamlet of Wonston, near Winchester, said a successful England World Cup run would be an ‘early Christmas present’ for small pubs.

The CAMRA pub-of-the-year has been a public house since the 1800s but faced an uncertain future during the pandemic, where it was unable to open for months because it does not serve food.

Mr Todd, 54, said: ‘The World Cup is running over what would normally be our quietest weeks of the year.

‘The first three England games saw our sales 320% up on this time last year.

‘A good cup run will mean tills ringing louder and longer for me as a publican. The knockouts will drive more people into pubs craving that big match atmosphere.

‘Our cellar is stocked full of beer for tonight and the phone has not stopped ringing with people wanting seats. 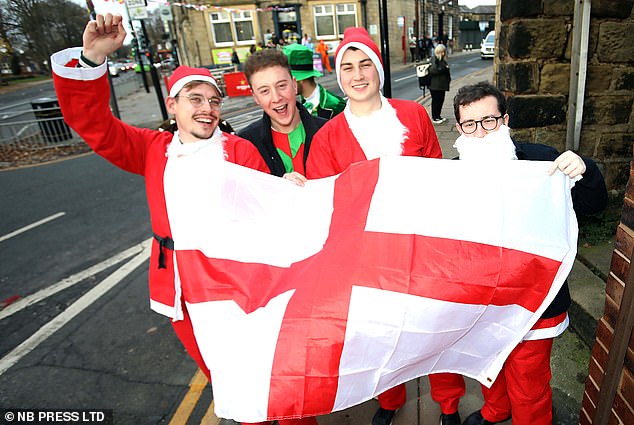 The Chestergate pub in Stockport has changed its name to The Southgate in honour of the England boss. Pub manager Stephanie Armstrong, 34, is expecting a full house well before the 7pm kick off.

She said: ‘There’s going to be a brilliant atmosphere in here. I can’t wait.

‘We’ve got loads of screens showing the footie and we’ve ordered extra beer in. It’s not going to be a usual Sunday night.’

At Rossiter’s Organic Butchers in Birmingham, punters were lining up to buy special Bellingham bangers — named after the England prodigy, 19.

The sausages – which contain Gloucester old spot pork spiced with pepper and chilli – were the brainchild of master butcher Steve Rossiter, 55.

Bellingham played for Birmingham City before making a big-money move to German club Borussia Dortmund in 2020.

Blues fan Steve, 55, said: ‘Everyone loves the Bellingham bangers — except for the Aston Villa fans.

‘The sausages have a peppery kick to them — and we hope Jude will be peppering the Senegalese goal.

‘Jude is a proper West Midlands lad and we are all so proud of how far he has gone.’

Spending in pubs, bars and clubs rose by 20.5% for the Wales game compared with the same day in 2021. 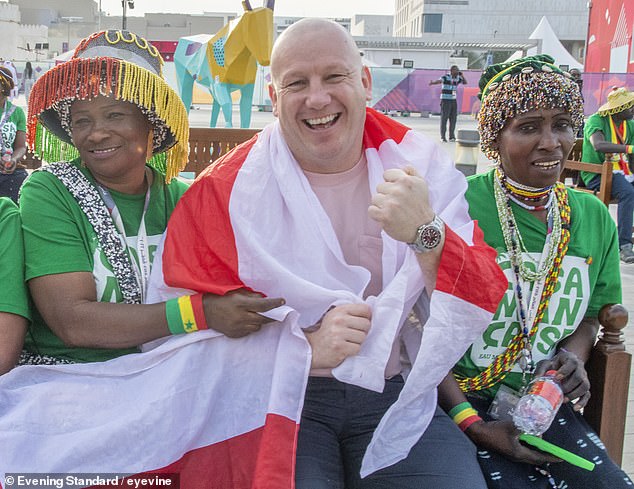 England fan Carl is pictured with Senegal fans in Doha. Senegalese football fans based in the UK have decided where their loyalties lie as they gear up for Sunday’s World Cup clash

‘Pubs will be putting in a huge amount of time, effort and resource to offer the ideal place to watch the football but many are still suffering from a lack of staff, so we’d encourage all visitors to be patient with bar staff while they work during one of the busiest times of the year.’

Emma McClarkin, Chief Executive of the British Beer and Pub Association said: ‘Pubs were hoping for a boost to business during this World Cup and so far, the beer has been flowing, and fans have been showing up to cheer on England.

‘The tournament has been filling up pubs on days that otherwise might be quieter, and we’re hoping that trend continues in the next couple of weeks.

‘It’s been a tough year for our industry, and we know people are feeling the pinch but we’re really hoping fans continue to turn out to support two great British institutions by toasting to the Three Lions at their local pub. We’ll be keeping everything crossed because when England do well, so do our pubs!’ 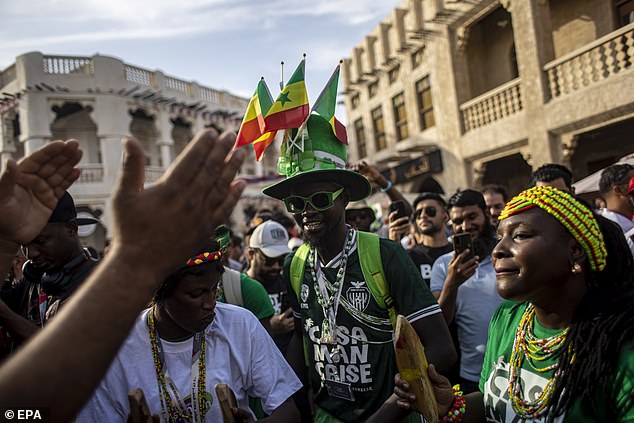 Senegalese football fans based in the UK have decided where their loyalties lie as they gear up for Sunday’s World Cup clash which will send either Senegal or England out of the tournament.

The Three Lions’ 3-0 win over Wales secured them a spot in the knockout stages against Senegal, who became group A runners-up with a 2-1 victory over Ecuador on Tuesday.

Veronique Sow is from Senegal and will support them against England but has lived in Sutton, south London, for five years and said she expects ‘a very tough match” on Sunday, which her close friend and the team’s injured star, Sadio Mane, is set to miss.

‘Whatever the outcome of the match, I will be happy because Senegal is my country and England is my adoptive country.’

Ms Sow and Mane first met when she was working for the Senegalese Football Federation 10 years ago.

She is in Qatar and has tickets for Sunday’s match, which she believes will go to penalties after a 1-1 draw before Senegal clinch a spot in the quarter-finals.

Ms Sow explained that her husband, who is British, will also support Senegal – but maintained England will gain her support if they triumph.

‘It’s definitely my second home because when the competition started, I was sharing pictures of England and Senegal as well,’ she said. 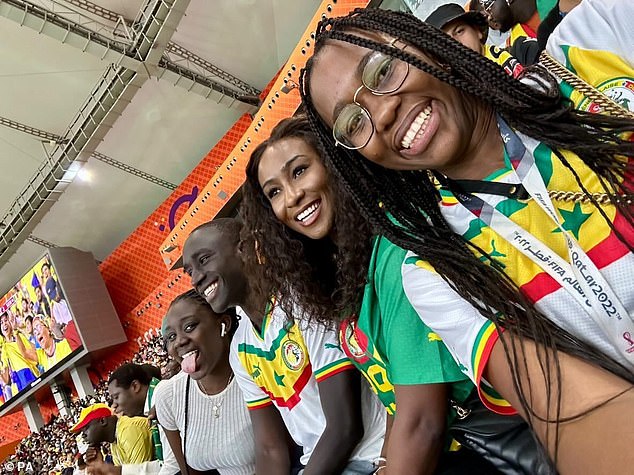 Ms Sow is from Senegal and will support them against England but has lived in Sutton, London, for five years and said she expects ‘a very tough match’ on Sunday

‘I support Senegal and England but for this game, I have made a choice and I will support Senegal. If we lose, I will come back and then support England for the rest of the World Cup.’

Aziz Ndiaye, 52, is also from Senegal but holds dual citizenship as he has lived in the UK since 1996 when he came to study at the University of Westminster.

Mr Ndiaye, an accountant based in Greenwich, told PA he is ‘pretty confident’ Senegal will win but described conflicting family ties as his 11-year-old son, Jules, will back England.

‘He might not have supper, depending on the results,’ Mr Ndiaye joked.

‘I would rather not play (England) because they are my two countries, but it’s football.

‘I’m feeling pretty confident, even though we’ve been given 1% of a winning chance against England.’

Mr Ndiaye added that if Senegal were to exit the competition, he would support England.

He has not yet decided where he will watch the match — which he predicts will finish 2-1 to Senegal — but said many of his Senegalese friends in London will tune in.

‘People are very excited,’ he said. ‘Hopefully there will be a good turnout… I’ve got my Senegal shirt here, I’ve also got my flag ready. Bring on Sunday.’

Faty Kane, who is Senegalese and lives in Whitley Bay near Newcastle, told PA she is “totally confident” Senegal will beat England.

‘We are the African champions so it would be sad if we were to go out so soon,’ the 39-year-old founder of womenswear label Tarunah said. 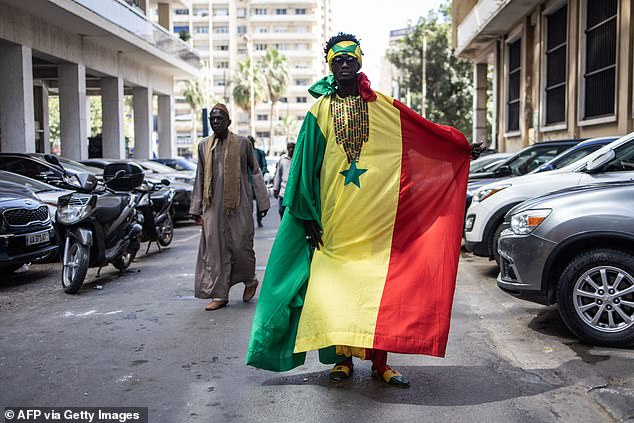 A Senegalese fan wears a boubou, fashioned out of the Senegalese National flag, in Dakar

‘I think we will have to show that we are not the African champions for nothing.’

Mrs Kane thinks it will be 1-0 to Senegal but hopes her team scores even more goals.

Despite being sad star player Sadio Mane is injured, she said: ‘I am totally confident that they will win, especially after their performance in their last game.’

Mrs Kane said her husband Steve, 41, who works for a charity, is British and whose family is from Scotland, is a ‘proper football fanatic’ and will want England to win.

However, he will ‘still be happy’ if Senegal win and his family are supporting the Senegalese team.

As for the couple’s children, Mrs Kane said they have a fairly diplomatic stance, saying ‘we want England and Senegal to win’.

‘They were quite loyal to the Senegalese team and then when we told them that Senegal would play England, they did not know who to support – I think they just want both teams to win,’ she added.

Their children share their names with two of Senegal’s top players.

The family will tune into the match wearing their football shirts and waving flags and, despite saying there is no chance of a rivalry brewing, Mrs Kane said she might need to think of a bet against her family if her match prediction comes true.