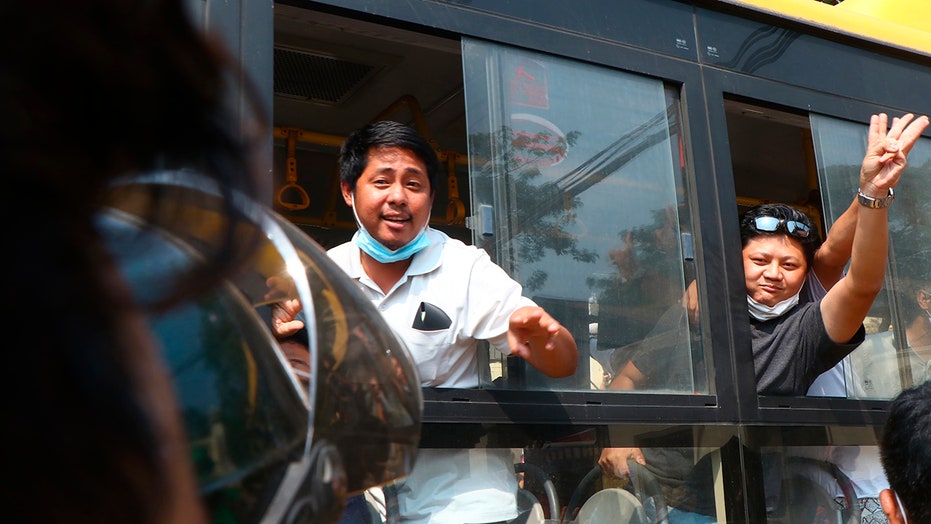 Hundreds of people imprisoned for protesting last month’s coup were released Wednesday in the first apparent gesture by the military to try to placate the protest movement.

Witnesses outside Insein Prison in Yangon saw busloads of mostly young people, looking happy with some flashing the three-finger gesture of defiance adopted by the protest movement. State-run TV said a total of 628 were freed.

The prisoners appear to be the hundreds of students detained in early March while demonstrating against the Feb. 1 coup that ousted the elected government of Aung San Suu Kyi. 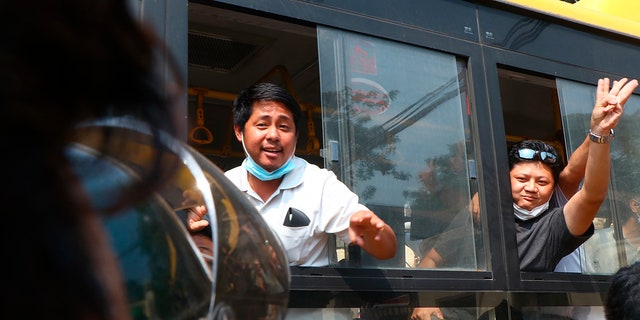 An arrested protester flashes the three-fingered salute while onboard a bus getting out of Insein prison to go to an undisclosed location Wednesday, March 24, 2021 in Yangon, Burma. (AP Photo)

One lawyer, speaking on condition of anonymity because she doesn’t want attention from the authorities, said all those released were arrested on March 3. She said only 55 people detained in connection with the protests remained in the prison, and it is likely they will all face charges under Section 505(A) of the Penal Code, which carries a penalty of up to three years in prison.

Burma’s Assistance Association for Political Prisoners says it has confirmed the killings of 275 people in connection with the post-coup crackdown, with additional deaths still unverified. It also says that as of Tuesday, it had verified arrest or charges against 2,812 people, of whom 2,418 remain in custody or with outstanding charges.

Demonstrators on Wednesday tried a new tactic that they dubbed a silence strike, calling on people to stay home and businesses to close for the day.

The extent of the strike was difficult to gauge, but social media users posted photos from cities and towns showing streets empty of activity save for the occasional stray dog.

The online meme posted to publicize the action called silence “the loudest scream” and explained its purpose was to honor the movement’s fallen heroes, to recharge protesters’ energy and to contradict the junta’s claims that “everything is back to normal.”

BURMA POLICE OFFICER WHO REFUSED TO FIRE ON PROTESTERS FLEES TO INDIA: REPORT

The new tactic was employed after an extended onslaught of violence from security forces.

Local media reported that a 7-year-old girl in Mandalay, the country’s second-biggest city, was among the latest victims on Tuesday. The Assistance Association for Political Prisoners included her in its list of fatalities.

“Khin Myo Chit was shot in the abdomen by a soldier while she sat in her father’s lap inside her home in Aung Pin Le ward,” the online news service Myanmar Now reported, quoting her sister, Aye Chan San.

The report said the shooting took place when soldiers were raiding homes in her family’s neighborhood. The sister said a soldier shot at their father when he denied that any people were hiding in their home, and hit the girl.

Aye Chan San said the soldiers then beat her 19-year-old brother with their rifle butts and took him away.

The Assistance Association for Political Prisoners recorded three killings in Mandalay on Tuesday, though some other reports said there were five.