Security forces in Burma continued their campaign of intimidation as they cracked down on protesters demanding the return of the elected government.

Thousands of protesters gathered in Naypyitaw, the nation’s capital, and Mandalay, the country’s second-largest city.

Soldiers and police appeared at both sites, attacking protesters with sticks and slingshots. Local media reported that police also used rubber bullets on the crowd and that a few people were injured. 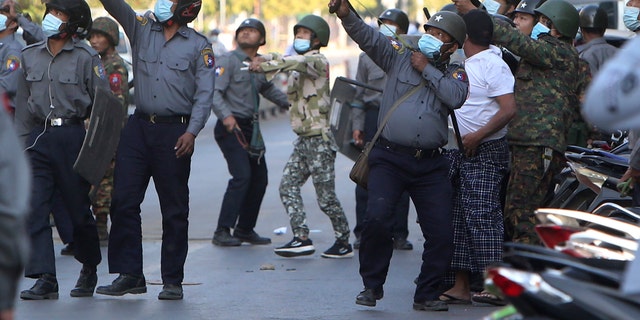 A policeman aims a slingshot towards an unknown target during a crackdown on anti-coup protesters holding a rally in front of the Myanmar Economic Bank in Mandalay, Burma on Monday, Feb. 15, 2021. (AP Photo)

Ambassadors from the United States and Canada and 12 European nations called on Burma’s security forces to refrain from violence against those “protesting the overthrow of their legitimate government.”

Demonstrators in the capital also demanded the release of students who were detained for protesting. One student told reporters that police arrested the students while they were peacefully demonstrating.

Thousands of engineers marched on the streets of Mandalay chanting and holding signs that read: “Free our leader,” “Who stands with justice?” and “Stop arresting people illegally at midnight.” 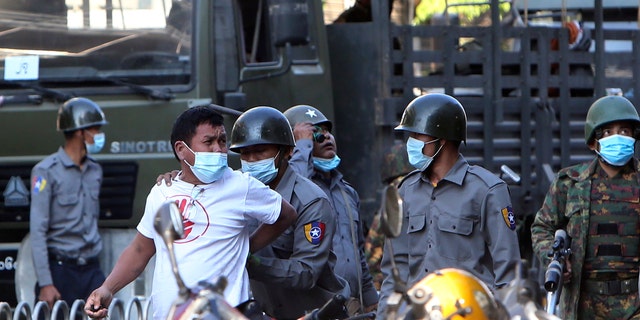 A man is held by police during a crackdown on anti-coup protesters holding a rally in front of the Myanmar Economic Bank in Mandalay, Burma on Monday, Feb. 15, 2021. (AP Photo)

On Sunday, the U.S. State Department authorized the voluntary departure of non-emergency American government employees and their families. The authorization was based on “heightened potential for violence, continued telecommunications restrictions, and limited flights out of Burma,” according to a statement from the U.S. Embassy in Burma.

The embassy remains open and continues to provide services to Americans in Burma.

The State Department had previously updated its Travel Advisory to Level 4 – “Do Not Travel” – due to the civil unrest and coronavirus pandemic.

“The Burmese military has detained and deposed elected government officials,” the statement read. “Nation-wide protests and demonstrations against military rule have occurred and may continue.” 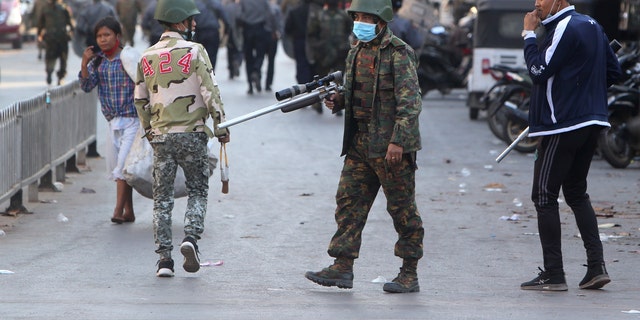 A soldier holds a long firearm during a crackdown on anti-coup protesters holding a rally in front of the Myanmar Economic Bank in Mandalay, Burma on Monday, Feb. 15, 2021.  (AP Photo)

Burma’s military leaders extended the detention of elected leader Aung San Suu Kyi until Feb. 17, when she is expected to make a court appearance by videoconference.

When the military seized power, it detained Suu Kyi and members of her government and prevented recently elected lawmakers from opening a new session of Parliament.

The junta, led by Senior Gen. Min Aung Hlaing, said it stepped in because the government failed to properly investigate allegations of fraud in last year’s election, which Suu Kyi’s National League for Democracy party won in a landslide.

The state election commission refuted that contention, saying there is no evidence to support it.