To survive, human beings are programmed to hope for the best. That’s why back in early 2020 many – probably most – of us believed the COVID-19 pandemic would pass before the end of the year. Remember the predicted snapback that was supposed to happen after September 2020? But here we are deep in the pandemic’s third year, with higher death and infection rates than ever before, masks still a fact of life and, inevitably, a dislocated economy.

True, vaccines mean we can go out now, but it’s hard to get an appointment with a doctor, hospitals are under strain and schools are relying on emergency teachers to keep going. Supply chain problems and workplace shortages lead to often serious product and service gaps. 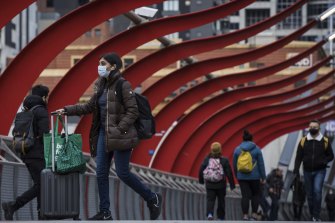 Three years into the pandemic and we have high death and infection rates, and a dislocated economy.Credit:Darrian Traynor

Sometimes it feels like we’re inhabiting a pre-motorisation Australia. The postal service is so sluggish that it can make the days of the horse and cart look jet-propelled. Energy prices are out of control. Interest rates are on a steady upward trajectory. So, too is inflation. Contrary to the bleatings of well-paid commentators and business lobbyists, wage rises for ordinary workers in the suburbs and regions have no chance of keeping pace.

Let’s face it: these are troubled times. The world is becoming a scarier place, everyday life is challenging and the old normal is gone. We have a legion of Australians, from children all the way to the aged, whose heads have been messed up by the fear, isolation and disruption of the pandemic. Those experiences don’t fade away; they leave a mark. The statisticians tell us we have full employment but a patchy economic outlook. There is a recovery, but it doesn’t quite feel like a recovery.

Internationally, we are witnessing – and could fall victim to, either economically or militarily – the decline of the US and the rise of China. Russia’s expansionism in pursuit of a recreated Soviet empire, also a driver of our inflation problem, is but one development ratcheting up the threat of nuclear conflict. Domestically, years of rising housing and income inequality are now putting stresses right through the society.

This is an era that will be examined and analysed by historians for many decades to come. It is a pivotal moment like the world wars and the Great Depression. These moments always have political consequences. Sure enough, we’ve broken with the recent past and just elected a new government – with qualifications.

We had an election where the defeat of the incumbent government was emphatic, and the victory of the challenger was not. The Liberals lost 19 seats, but the ALP improved its seat count by only nine. All the same, it was enough to give Anthony Albanese and his team a shot at running the country.

This offers an enormous opportunity for a new political settlement. As far as I can see, the biggest challenge facing the Albanese government isn’t necessarily meeting all the usual political metrics such as improving the budget bottom line, as vital as they are: it’s changing the ways in which political issues are argued and understood. Among the worst aspects of Australian politics over the past dozen years or more has been the embrace of glibness and the superficial presentation of policy.

As the society and the economy got more complex, the political dialogue went the other way. Politics was progressively dumbed down. Complexity was ignored. This was effective for quite a while but for Australia to navigate the future, the nation will need something better. If the 2022 election result suggested anything, it was that a majority of voters understood that. The Morrison model had exhausted itself. 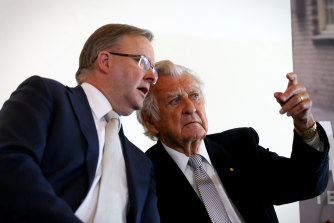 Before he became prime minister, Bob Hawke regularly told a story about the Labor Party which cast it as the party to which Australians turned in the nation’s worst times. In his telling, they elected Labor governments to get them through both the world wars and the Great Depression. There was some embroidery there.

Labor governments fell apart during World War I and the Depression, and actually assumed office during World War II without going to an election. However, Hawke’s revisionist view became truth in his own time. When he became prime minister in 1983, it was in the depths of the worst recession in 50 years. He went on to be Labor’s most successful prime minister. 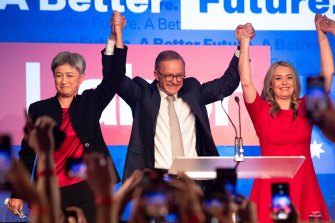 The defeat of the Coalition government at the May election was emphatic while Albanese’s victory was not.Credit:Janie Barrett

If there’s one genuine insight in Hawke’s interpretation of history, it’s that it seems to be Labor’s destiny to find itself in office during tough times. The oil shocks blighted Gough Whitlam’s stint as PM and the global financial crisis happened early under Kevin Rudd’s watch.

We’re yet to see if Albanese has what it takes to lead us to that better place. If he takes the easy route and gets addicted to cheap hits like his predecessor, it will only make a bad historical moment worse.