Europe's summer of suspended reality is drawing to its inevitable close. After four months of basking in sunshine and indulging in overseas holidays, a long-feared second wave is here to spoil the fun.

The taste of normality soured this week when two men who have the ear of British Prime Minister Boris Johnson – chief scientific adviser Sir Patrick Vallance and England's chief medical officer Chris Whitty – delivered grim news about what might replace the continent's temporary reprieve from the worst of COVID-19. 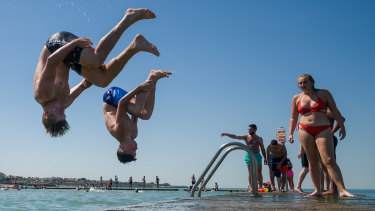 Boys somersault into the water from the lido jetty wall at Margate beach in England.Credit:Getty

They warned that cases were rising and Britain might hit 50,000 infections a day by October 19 – twice the number of cases that Australia has recorded for the entire year. Some 200 people could die every day from November – just as the northern winter starts to bite – unless new measures were introduced to control the situation, they concluded.

"Cases are increasing, hospitalisations are following, deaths will unfortunately follow that and there is potential for this to move very fast," Vallance said.

France and Spain are also dealing with a surge in cases that can't be explained by an increase in testing. The number of new confirmed cases over the past fortnight compared to the previous one were up 190 per cent in Denmark, 141 per cent in Finland and the Netherlands and 122 per cent in Austria.

For the time being the growth has not been accompanied by a major spike in deaths. The cumulative death rate for the past fortnight in Spain is 2.4 per 100,000 people, compared to its peak of 23.7 in April. France's current rate of 0.9 deaths per 100,000 compares to 20.6 earlier this year.

The difference helps explain why Europeans seem relaxed about the second wave and are hesitant to embrace new nationwide lockdowns. The current state of play seems rosy compared to what they endured in April. 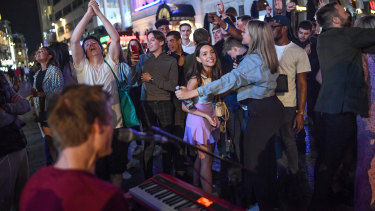 People watch a busker in London’s Leicester Square. Most gatherings of more than six people have now been banned.Credit:Getty

The subdued death rate is thought to be because most of those contracting the virus are aged in their late teens, 20s and 30s and consequently less at risk of hospitalisation. However that dynamic won't last and experts are already seeing evidence that infections are seeping into older and more vulnerable groups.

"It's a race against time," French Prime Minister Jean Castex told France 2 television this week. "The public must be attentive and prudent. If we don't act we could find ourselves in a situation similar to [the northern] spring."

Whitty knows how quickly the virus can turn deadly from a low base: "A lot of people have said maybe this is a milder virus than it was in April. I'm afraid that although it would be great if that were true, we see no evidence that is the case."

The biggest change for Europe's second wave is that national lockdowns are now about as popular as the virus itself. Johnson says he reserves the right to go further than some of the minor tweaks he made to social distancing rules this week, but a fresh lockdown seems a political impossibility.

MPs of the ruling Conservative Party and some of Britain's influential newspapers have already criticised basic changes like closing pubs and restaurants at 10pm, and will not respond kindly to anything tougher. Some are even demanding a vote in Parliament on any changes – something Johnson is so far refusing.

There is also growing scepticism towards Whitty and Vallance, who presided over some controversial judgements during the first wave, such as the effective abandonment of mass testing and actively discouraging the public from wearing face masks. During a meeting with restive backbench MPs, Johnson reportedly defended his two top experts by insisting they were "right in the middle" on responding to the virus and "not outliers".

Scottish First Minister Nicola Sturgeon doesn't think Johnson has gone far enough. In Scotland, a high 7.8 per cent of all people being tested are getting positive results and people have now been banned from mixing with other households. In England, any household can mix provided the group doesn't exceed six individuals. 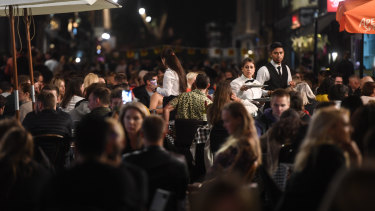 Restaurants, pubs and bars in the UK will have to close at 10pm under the new rules.Credit:Getty

Asked by radio host Julia Hartley-Brewer whether it was "extraordinary" that SAGE had not considered the new measures before they were announced, Michie replied: "Yes."

Michie, who is also a member of a SAGE sub-group which examines how the public will respond to the pandemic, also said increased fines for those who test positive and break self-isolation rules could discourage people from getting tested.

"Obviously not isolating is a huge problem and one the government absolutely has to address. But the [sub-group] has been saying consistently over the past few months that we should be engaging with communities, explaining, enabling and supporting them to isolate and to adhere to measures, not to give these hefty fines."

A major study of more than 30,000 adults in the United Kingdom released this week found about 70 per cent intended to self-isolate if they developed COVID-19 symptoms. But just 18.2 per cent of those who actually did get symptoms ended up self-isolating in line with government rules.

In other damning findings, only 50 per cent of people could actually recognise the tell-tale symptoms of coronavirus and barely 11 per cent quarantined for a full two weeks after being informed by the government's contact tracers that they had been in proximity to a confirmed infection.

Whitty says he acknowledges ministers must tread a tightrope between controlling the virus but not smashing the economy and destroying public finances. A fresh report by the Institute for Government suggests COVID-19 will cost the British government at least £317 billion ($573 billion) in increased public borrowing this financial year alone.

"If we do too little, this virus will go out of control and we will get significant numbers of direct and indirect deaths," Whitty said.

"But if we go too far the other way then we can cause damage to the economy which can feed through to unemployment, to poverty, to deprivation – all of which have long-term health effects.

"We need always to keep these two sides in mind."