London: Britain’s Royal Navy has denied Russian claims that one of its destroyers had been chased out of Crimean waters. 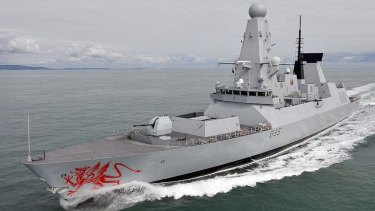 The FSB claimed it had ignored “warnings” not to enter “Russian territorial waters”.

General Kulishov said: “The destroyer Dragon of the British Navy crossed the state border of the Russian Federation in the area of Cape Khersones in the Black Sea.“

“As a result of the joint actions with the Russian Navy and the Russian Aerospace Forces, the warship was expelled into neutral waters.”

He said the ship had displayed “unfriendly” actions when it claimed the right of innocent passage in waters near the westernmost point of Sevastopol, the largest city in Crimea and the site of the headquarters of the Russian Black Sea Fleet.

However, the Ministry of Defence said on Thursday (Friday AEST) the allegations were “categorically untrue”. The warship sailed through the Black Sea from Odessa in Ukraine to Batumi in Georgia, The Daily Telegraph understands.

A Whitehall source added that the UK does not recognise Russia’s sovereignty over Crimea and those waters around Crimea are not considered Russian territorial waters.

An MoD spokesperson said: “HMS Dragon was taking the most direct route between two port visits, navigating a recognised safe route for all international shipping within Ukrainian waters.

“The Russian Federation Navy did not impede HMS Dragon’s passage. She navigated without incident, exercising our right of innocent passage under the UN Convention on the Law of the Sea.”