MELBOURNE (Reuters) – Catholic cardinal George Pell will have one last chance to overturn his conviction for sexually assaulting two teenaged choirboys after the Australian High Court on Wednesday agreed to hear the former Vatican treasurer’s appeal. 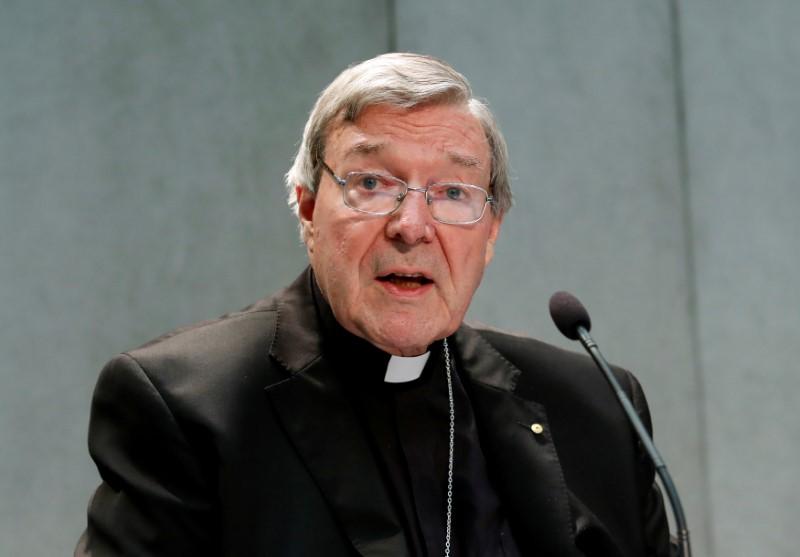 Pell, 78, the most senior Catholic official worldwide to be jailed for child sex offences, is currently serving a six-year sentence handed down in March. He is not eligible for parole until 2022, when he will be 81.

The High Court hearing, to be presided over by a full bench of five or seven judges, will be held in March 2020 at the earliest, a court spokesman said. Pell will remain in prison until the appeal is heard.

Lawyers for Pell declined to comment on Wednesday’s decision, which is the cardinal’s final avenue to clear his name after an earlier appeal upheld his conviction by a lower court.

The cardinal was found guilty in the Victorian County Court in December of abusing two 13-year-old boys at St Patrick’s Cathedral in the late 1990s when he was archbishop of Melbourne.

A first appeal was heard by the Victoria Court of Appeal, where judges upheld his conviction in a 2-1 majority in August.

Both the Australian Catholic church and advocates for victims of clergy abuse lamented the slow resolution of the case after the High Court ruling.

“This will prolong what has been a lengthy and difficult process, but we can only hope that the appeal will be heard as soon as reasonably possible and that the High Court’s judgment will bring clarity and a resolution for all,” Archbishop Mark Coleridge, head of the Australian Catholic Bishops Conference, said in a statement.

Abuse survivors’ advocates called the court’s decision a blow and said it would deter other victims from coming forward to expose wrongdoing.

“We are disappointed that Cardinal George Pell and his lawyers will have yet another opportunity to attack and revictimize the former choirboy from St Patrick’s Cathedral,” the Survivors Network of those Abused by Priests said in a statement.

The High Court on Wednesday ordered Pell’s lawyers to file their arguments for appeal by Jan. 8, with the crown prosecutors’ response due on Feb. 5.

Pell’s lawyers took the case to the High Court on the basis the Court of Appeal was wrong to have found that the jury’s verdict was not unreasonable. Lawyers also argued the majority judges had erred in shifting the burden of proof to the defense to show that it would have been impossible for Pell to have committed the offenses.

Prosecutors said in their filing to the High Court last month there were no grounds for the appeal. They argued that the majority of the Court of Appeal made no error in their approach to evaluating the facts of the case and that the proposed appeal raised “no question of law of public importance”.

High Court cases are decided by a majority.

Pell was relieved of his position as Vatican treasurer after he was convicted, but remains a cardinal. The Pope has declined to comment on the case until the appeals process is exhausted.

For Pell to be dismissed from the priesthood, the Vatican’s Congregation for the Doctrine of the Faith would have to find him guilty following a separate canonical trial or a shorter process.