Shocking CCTV footage captures the moment a British ambulance donated from Wales was shelled by Russian troops in Ukraine.

The ambulance travelled more than 2,000 miles to the city of Mikolayev to help deliver vital emergency healthcare amid the Russian invasion.

Dr Mateo Szmidt, an emergency medicine consultant at Prince Charles Hospital in Merthyr Tydfil, believes it was one of two vehicles sent from Wales in March.

Reposting CCTV footage of the attack on his Instagram page the doctor said: ‘I am sad and angry as this just shows how the Russians have no conscience about attacking civilian sites.

‘Our 1st ambulance that made it all the way to Mikolayev has been shelled at. I am waiting to hear if our ambulance is salvageable. Will keep you posted.’

No one was in the vehicle when it was struck by the missile. The footage was also shared by Medical Aid Ukraine which said 18 ambulances are being destroyed in the country every day.

Dr Szmidt has discovered the engine is still working and the inside is largely undamaged. 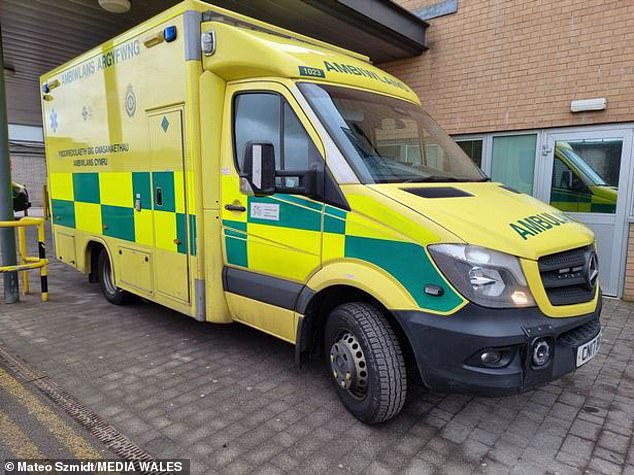 The ambulance travelled more than 2,000 miles to Mikolayev to deliver vital healthcare 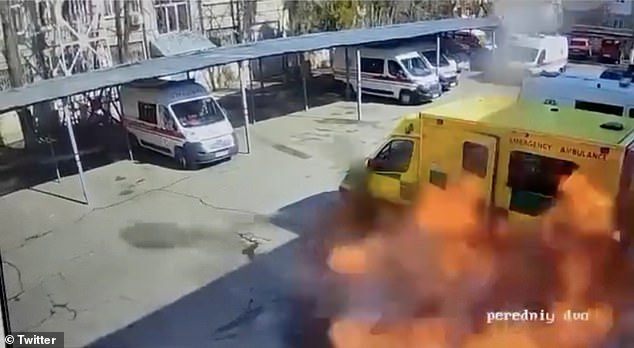 Updating followers on Twitter: ‘Damage Report from Ambulance #1. Tyres blown out and side windows. Good to know inside all ok and engine working.’

Dr Szmidt said he hope the vehicle, which he believed had been near Odesa for three weeks, can be salvaged and is appealing for help to fix it if possible.

Speaking to ITV, he added later: ‘The idea of an ambulance is to help people and to provide aid to someone, not see it destroyed by some kind of ruthless people with no morals.

‘I think even in times of conflict, there’s certain rules that people should play by – but this video just demonstrates that these rules aren’t being followed in the conflict in Ukraine.’

He said there are discussions over whether to paint the ambulances a different colour so they are not as easily identifiable as they are being targeted in Ukraine.

Dr Szmidt’s fundraising page has now raised more than £26,000 to send emergency vehicles to the war-torn country. He says there are hopes to send a third ambulance, packed with medical supplies and critical care equipment, to the country. 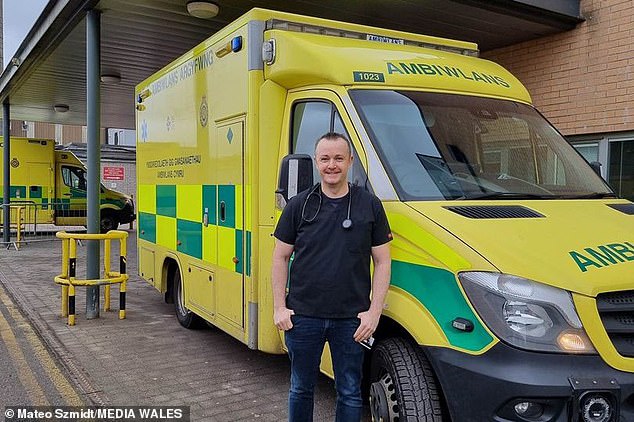 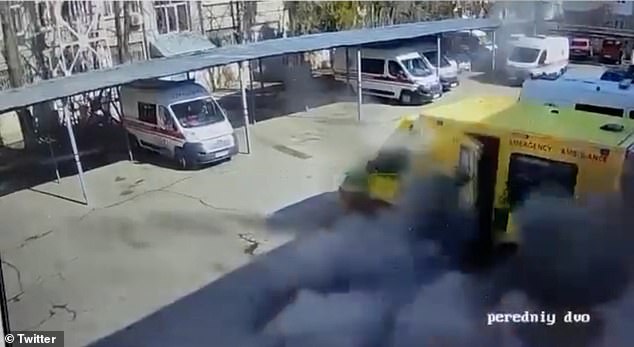 The ambulance suffered extensive damage but is hopefully salvagable, Dr Szmidt has said

Last month, Dr Szmidt explained that he came up with the idea after hearing of a similar initiative in Poland.

‘I thought that if they’re in need of these ambulances to transport patients, the ambulances we use [in the NHS] and that get decommissioned are very good,’ he said.

His initiative comes as part of a wider effort by Cwm Taf Morgannwg health board, which manages Prince Charles Hospital.

He said the health board had collected personal items from across its hospitals, such as clothes, and added that ‘seven big crates of medical supplies’ had just been sent to Ukraine.

Dr Szmidt explained that NHS ambulances get sold on once they have been withdrawn from service and that he bought one that has been decommissioned from a private motor company.

‘I did try to get an ambulance donated [by the health board], but unfortunately, with the current crisis with ambulances, there are no ambulances being decommissioned from the two sites I spoke to,’ he said.