A 68-year-old blind stroke survivor has been refused a much-needed guide dog after her local council failed to sort out the half-mile long footpath blocked by overgrown shrubs.

Janice Parker, from Chelmsford, Essex, has slammed councillors for failing to act on the dangerous footpath on Baker’s Lane, which is her only route to and from her home, which she has fallen four times on in the last year.

The widowed pensioner went blind after having a stroke in 2019. she has no sight in her right eye and only partial sight in her left.

And because nothing has been done to fix the walkway, Guide Dogs UK told Mrs Parker that she could not have an assistance pet because the pavement was ‘extremely unsuitable for a guide dog’.

She said: ‘I’m really sad about it. A guide dog would help me so much. I would have so much more confidence walking with the dog than with my cane.

‘I’ve asked the council to sort this out but they don’t want to spend the money – surely someone’s safety is more important than money?’ 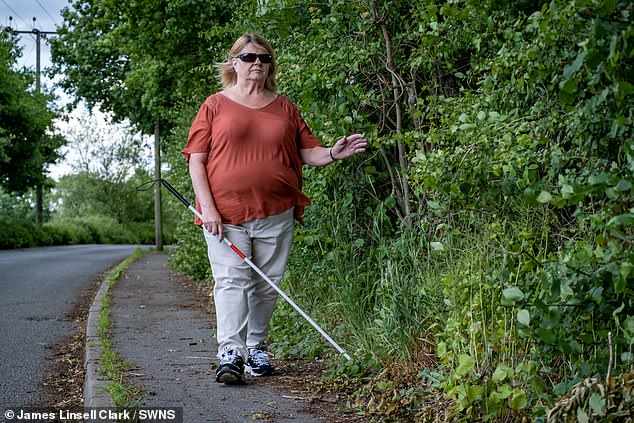 Janice Parker, a 68-year-old blind stroke survivor (pictured), has been refused a much-needed guide dog after her local council failed to sort out the half-mile long footpath on Baker’s Lane, near her home in Chelmsford, Essex, blocked by overgrown shrubs

Last month, the guide dog charity rejected her application for an assistant pet after visiting her home in Chelmsford.

Essex County Council has apologised to the 68-year-old for ‘the inconvenience caused’.

Guide Dogs UK said that blocked or damaged pavements pose dangers for people with assistance dogs as they can be forced onto the road.

Janice, who has two children and five grandkids, said: ‘The path is terrible, it’s extremely uneven. My cane gets stuck in the ridges and the growth.

‘I’ve fallen over four times this year, fortunately, there was no major damage done. A guide dog would help me so much. My eyesight is atrocious. Sometimes I walk into things on my right side and I find steps really difficult.

‘The Guide Dogs charity said that due to the state of the footpath it’s extremely unsuitable for me with a cane or with a guide dog.

‘They said that if the footpath is sorted out to a reasonable standard then I could reapply and go from there.’

The path, which has several utility poles on it, runs alongside a road that leads to around 300 homes and a nursery.

Janice, a retired McDonald’s supervisor, said: ‘The council are now saying that they need to know if they are responsible for the hedges.

‘But sorry, they can look that up within minutes. And that doesn’t change the state of the footpath. I spoke to the council about it three times last year and they told me it was all in hand but nothing happened.

‘I’m not going to give up, I’m going to keep badgering them.’ 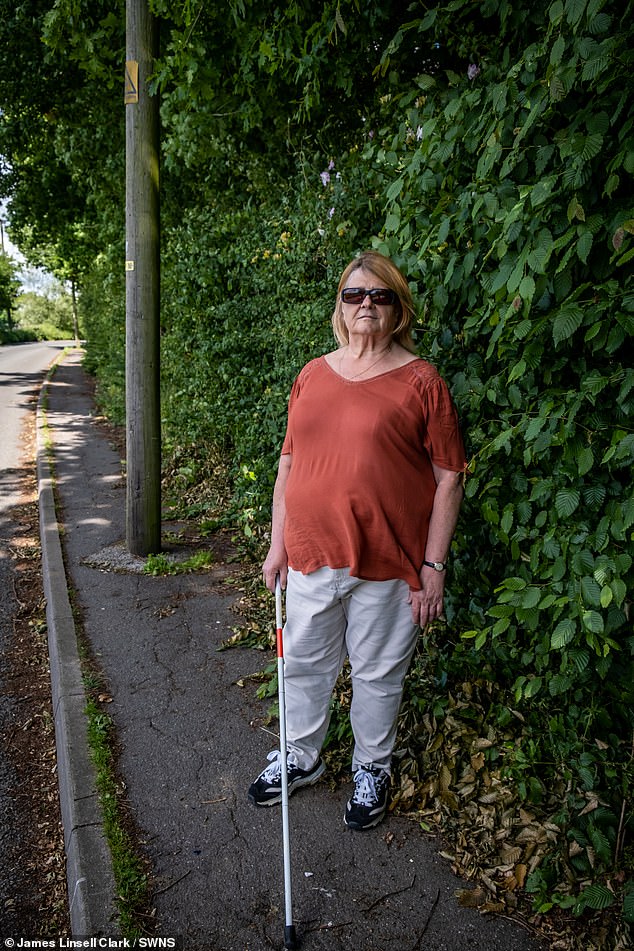 Last month, the guide dog charity rejected her application for an assistant pet after visiting her home in Chelmsford. Essex County Council has apologised to the 68-year-old for ‘the inconvenience caused’

Senior policy and campaigns manager at Guide Dogs UK, Chris Theobald, said that poor pavements are ‘all too common a problem’ for people with sight loss.

He said in a statement: ‘We’re not able to comment on individual applications for a guide dog, however when we make our assessments we take many factors into account, including the local environment.

‘In cases where the applicant’s regular routes would be unsuitable for a guide dog, we may not be able to offer them a partnership.

‘Guide dogs need space to work, and very narrow pavements combined with obstacles such as masts or other street clutter can force guide dogs and their owner out into the road repeatedly, potentially causing a real risk to their safety. 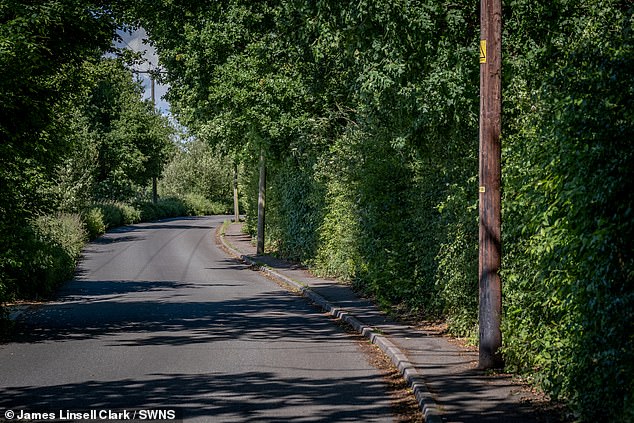 Guide Dogs UK said that blocked or damaged pavements pose dangers for people with assistance dogs as they can be forced onto the road. Baker Lane is pictured

‘Blocked and damaged pavements are sadly all too common a problem for people with sight loss around the country.’

A spokesperson for Essex Highways said: ‘We are sorry to hear about the inconvenience to Ms Parker.

‘We’ve looked into the situation and have concluded that the vegetation in question is situated on privately owned land. It is the landowner’s responsibility to manage this and cut it back.

‘We have already commenced enforcement activity by contacting the landowner in question to request that the vegetation be cut back within a satisfactory timescale, specified by ourselves.’