Nairobi: Children as young as 11 are being beheaded by a shadowy armed group in Mozambique, as US special forces fly in to train the beleaguered southern African nation’s military.

One 28-year-old woman who remained anonymous out of fear for her life said the militants beheaded her 12-year-old son near where she was hiding with her three other children.

“That night our village was attacked and houses were burned. When it all started, I was at home with my four children,” she told workers from Save the Children.

“We tried to escape to the woods, but they took my eldest son and beheaded him. We couldn’t do anything because we would be killed too.” 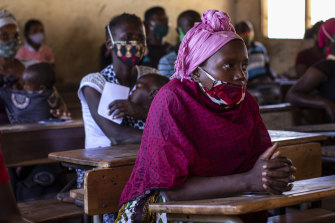 A 29-year-old survivor of the attacks by the militant group said that armed men murdered her 11-year-old son and that she did not have a chance to say goodbye or give her son a proper burial.

“After my 11-year-old son was killed, we understood that it was no longer safe to stay in my village. We fled to my father’s house in another village, but a few days later the attacks started there.”

Such horrors have become commonplace in Mozambique’s northern Cabo Delgado province over the past year.

Since October 2017, a grim war has slowly torn through the pristine beaches and tropical bushland of the isolated region, forcing some 700,000 people to flee and killing at least 2,400.

A central mystery hangs over the conflict. Reporting restrictions mean that little is known about the secretive insurgents behind all the attacks.

Locally the fighters are often referred to as Al Shabaab, the Somalian jihadist group. The Mozambican insurgents have pledged allegiance to Islamic State but it is unclear to what extent it is linked to the Middle Eastern group, though recently the US State Department said that there was a connection. 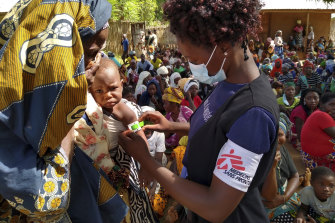 An MSF (Doctors Without Borders) staff member checks a child for malnutrition in Meluco, in the northern Mozambican province of Cabo Delgado, February 19, 2021.Credit:MSF

While other African insurgencies such as in the Sahel or in Somalia have received massive international attention and peacekeeping forces, Mozambique has received almost no military aid. This week, however, the US started a two-month-long mission to train Mozambican marines.

The sheer brutality of the violence has shocked aid workers and military personnel, who say they have never seen anything like it. People are often hacked to death and mutilated with machetes or beheaded in mass killings.

Most of the displaced are families from villages who have fled to the provincial capital of Pemba and are now being hosted by NGOs or with local families. They find themselves without shelter, short of food and battered day after day by heavy rains, extreme heat and malaria-carrying mosquitoes